Snowfall during mid-winter in Interior Alaska often does not show much of valley to ridge difference. After all, precipitation is almost always snow, and the elevations where people live vary by perhaps 2000 feet (say, Nenana to Ester Dome), trivial compared to, say the vertical change over similar distances in the Rockies.

That has most definitely not been the case so far month. Here is a chart of the daily snowfall thus far this month at Fairbanks International Airport and Keystone Ridge. 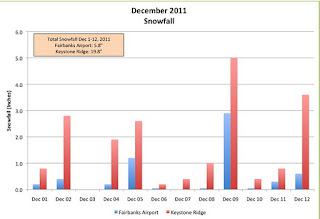 There was similar, though less extreme difference last month, when the Airport measured 9.2 inches of snow and Keystone Ridge 20.7 inches.

Below is a plot the difference in total December snowfall since 1996 between the Airport and Keystone Ridge. Monthly differences have not exceeded six inches, and the difference has not been more than 50% of the total at Fairbanks: thus far this month, the difference of 14.0 inches is a stunning 241% of the Fairbanks total. 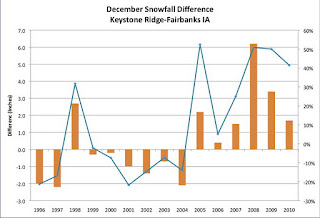 Of course, with more than two weeks left in December this difference will likely narrow, but given the usual minimal differences is unlikely to dramatically change.
Posted by Rick at 3:09 PM