Where is the Coldest Place in Alaska?

Regular reader Richard commented that Chicken frequently is cited as a place reporting very low minimum temperatures and asks what is the coldest place in Alaska. This is a question I regularly get, so here you go.

The first thing to keep in mind is the lack of good climate data over vast swaths of Interior and northern Alaska. Since the mid 1950s there have been only two Weather Service Offices in Interior Alaska (Fairbanks and McGrath), an area of something like 300,000 square miles. This is reasonably supplemented by several long term FAA stations: Northway, Big Delta/Fort Greely, Tanana, Bettles. Barrow is the ONLY long term climate site still operating on the North Slope, an area of about 85,000 square miles. There are a handful of long term sites (from a variety of observers) that are useful: Galena and Eagle, and some in the immediate Fairbanks. Everything else is hit or miss. Places you might think should have good long term climate data simply do not (e.g. Fort Yukon, Manley Hot Springs).

The lowest official temperature of record in Alaska is -80F, set in January 1971 at Prospect Creek, which was a pipeline construction camp at Mile 135 Dalton Highway (yes, there are many claims of lower temperatures). The lowest monthly average temperature (NCDC 1981-2010 normals) is Umiat, on the banks of the Colville River, about 140 miles southwest of Prudhoe Bay, with a January normal temperature of -21.3F, and a winter (Dec-Feb) normal of -19.3F.

Umiat, which started out as a Navy station during World War 2, is these days a logistics supply base for oil exploration and general access to the central inland North Slope. One family called Umiat home from the mid 1970s til about 2000, but before and after it is similar to Prudhoe Bay, in the it's no one's home but there are people there working in one capacity or another.

Umiat has the lowest winter mean temperature of any "settlement" in Alaska. That I am confident of (I wrote a paper about this back in the mid 1980s). However, based on 25 years of looking at weather satellite imagery of Alaska, I'm confident there are places upriver from Umiat that are colder. In fact, Umiat is often on the northern edge of the cold pool of air that develops on the north side of the Brooks Range. My guess is that some places southwest of Umiat (maybe near the confluence of the Colville and Killil Rivers) probably average 3-5 degrees cooler than Umiat. All these areas though are cold because it is hard to "warm up" rather than the super low temperatures that have historically been measured in the Interior. The lowest reliable temperature at Umiat, and the lowest I know of on the North Slope, is 66 below in February 1987. Lots of places in the Interior have been colder. 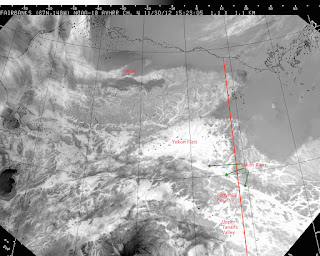 Turns out that today is a good day to discuss this topic. To the left is a NOAA-16 Polar Orbiter infrared image from 630am Friday. There is not much wind and hardly any clouds over the Interior, so the cold air pooled in valleys shows up nicely. To start with, there is nothing especially cold about Prospect Creek, or any of the Brooks Range valleys (including current or former climate stations at Chandalar Lake, Wiseman, Wild Lake, Coldfoot, Arctic Village). They all can get very cold in the right circumstances. Prospect Creek holds the record low simply because there happened to be a climate station, which was open for less than ten years, during a deep cold snap.

The Yukon Flats can be very cold. However, it's at low elevation (generally below 500; MSL), and areas north of the Yukon River can be breezy at times, breaking up the surface temperature inversion. The Yukon River Valley above the Flats can also be very cold, though there is practically no human habitation. The only community is near the Alaska-Yukon border at Eagle, which is at 900' MSL but is prone to downriver winds, breaking the inversion. The areas downriver from Eagle are less prone to wind. but are at slightly lower elevations.

The Upper Tanana Valley also gets very cold: it is about 1000 feet higher elevation than the Yukon Flats, and there are areas that do not get much drainage wind (e.g. Tok area, Northway and the Tetlin flats in general). However, the Upper Tanana Valley is comparatively close to the Gulf of Alaska (so gets clouds from that direction), and is also far enough south (Northway is at, gasp, 63N) that the sun has some impact on daytime temperatures except for very close to the winter solstice. 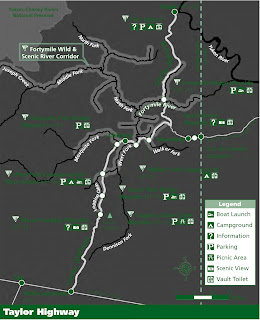 Which brings me to my candidate for the coldest area in Interior Alaska: the valleys of the Fortymile County. The Fortymile County is basically a high elevated plateau with winding rivers deeply cut into the plateau. The general elevation of the plateau is up around 2000-2500' MSL, with valleys, often very narrow, several hundred feet lower. The area was a focus for gold mining a century ago, but today is very sparsely populated. The Taylor Highway (BLM brochure map on the right), which is not maintained in winter, cuts through the Fortymile County, connecting the town of Eagle, on the Yukon River to the Alaska Highway. Chicken is the only community in the Fortymile County to have a post office.


The community of Chicken, and the current cooperative observer are in the valley of Chicken Creek, a small tributary of the Mosquito Fork Forty Mile River. Chicken does have the lowest mean January (and winter) average temperature in Interior Alaska, with a 1981-2010 normal January temperature of -20.9F (normal Dec-Feb temperature -16.3F).  There is nothing unique about the location of the coop station, Having been there, it looks to me to be completely representative of the area. It gets so cold because it is a high elevation valley well protected from any wind most of the time, maximizing radiational cooling. However, in spite of current NCDC normals, there is in fact less than 20 years of usable data from Chicken. If any currently active climate station can break the Prospect Creek record low, it's Chicken (which has been to 70 below twice in the past decade).

Chicken though is almost certainly not the coldest place in the Fortymile County. The short-lived O'Brien Creek co-op station, about 40 miles north of Chicken just north of the Fortymile River bridge was generally a bit colder (higher elevation, deeper valley) than Chicken. Because it was in a deep valley, it goes several months without actually seeing the sun.  It is in these kind valleys the absolute lowest temperatures are most likely to occur.

The lack of human habitation and the difficulty of getting automated equipment to work and record accurate extremely low temperatures makes documenting the extreme temperatures of this region difficult.