On February 14th, the National Weather Service in Alaska noted that the Howard Pass RAWS station achieved a wind chill value of -92°F at 5:39 a.m. That value was close the the presumed statewide record of -96°F set at Prudhoe Bay on 1/28/89 (temp -56°F and wind speed of 21 mph at Prudhoe Bay). Later in the afternoon of the 14th, the Howard Pass station measured a wind chill value of -97°F at 3:39 p.m. (temp -42°F wind speed of 71 mph). If verified, this would represent a state of Alaska and possibly a United States record.

The Howard Pass RAWS weather station is in the Brooks Range of northern Alaska. The station is located at an elevation of 2,062' along the edge of the Noatak River valley and can be found here via Google Maps. Figure 1 shows some pictures of the station that were posted on the NWS Facebook page on 2/15/14. Figure 2 shows a satellite image taken near the time of the record low wind chill value. 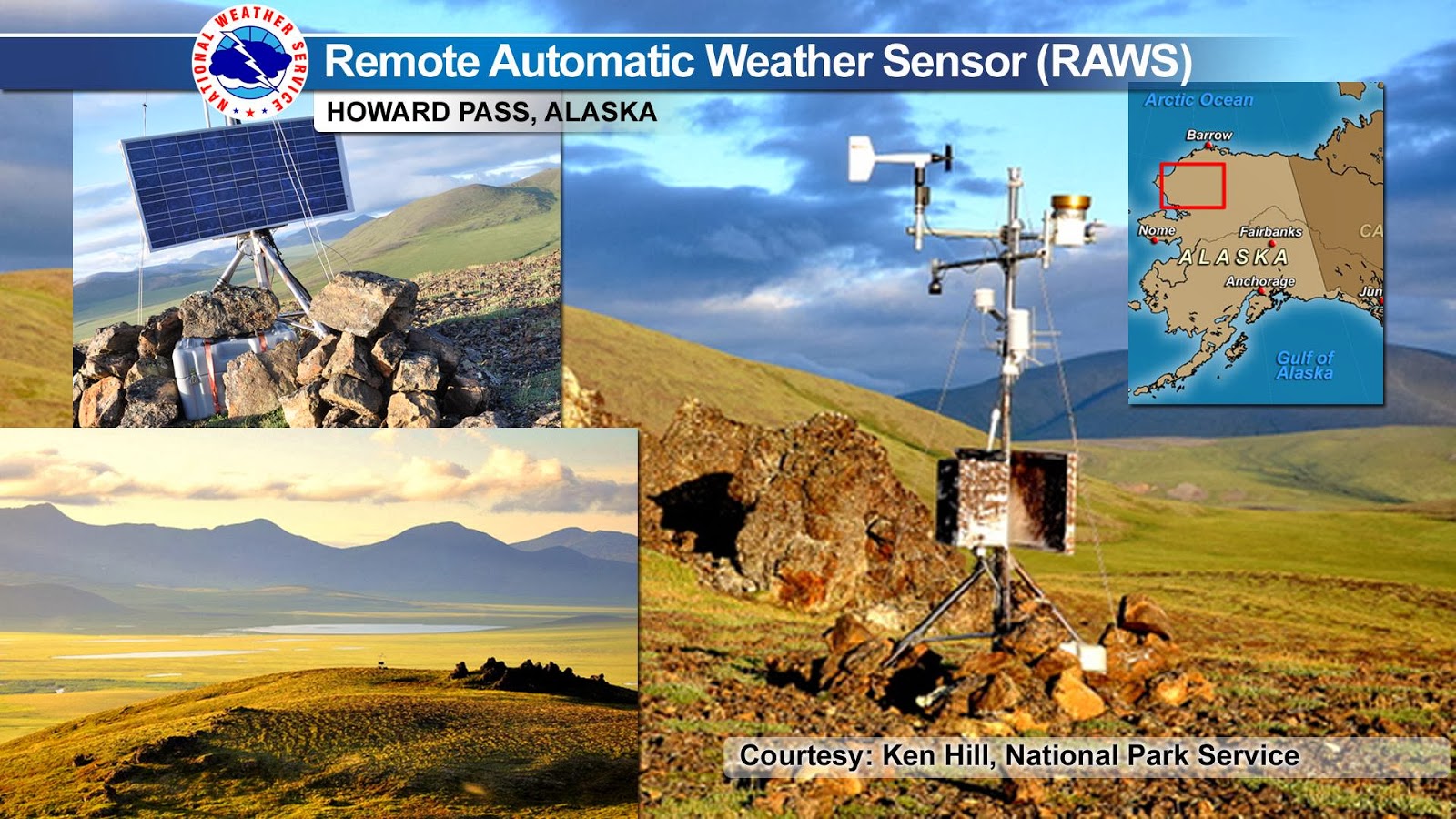 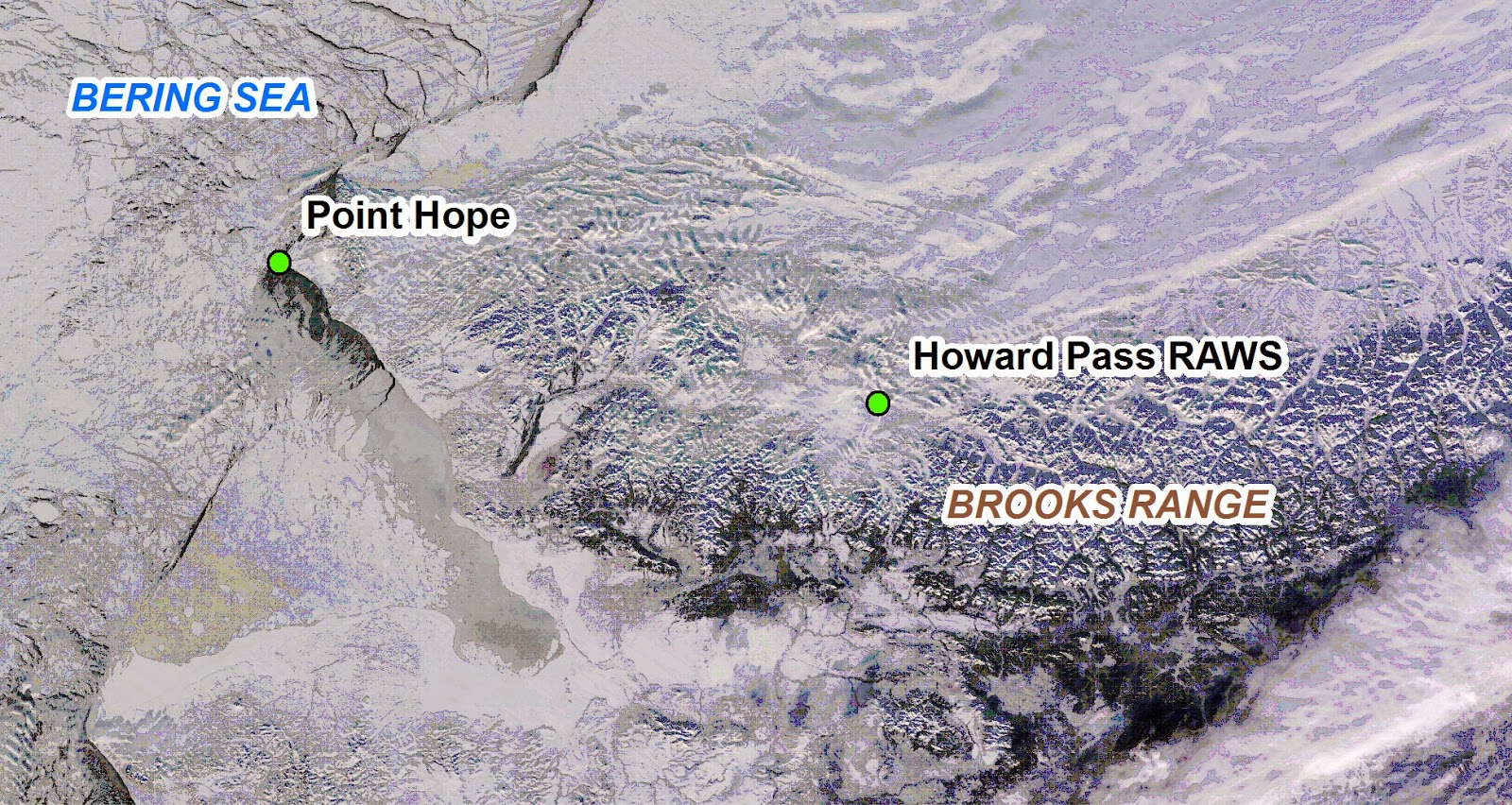 At first glance the wind chill values seems quite improbable. The temperature is not too surprising but the wind speed is remarkably high. This station has data going back several years and unfortunately the temperature data quality is not always very good. However, looking at the wind frequency distribution tables on the RAWS site (not shown), it appears that wind speeds over 60 mph occur pretty regularly during the winter months and a month-long average winter wind speed of 20-25 mph is typical. Based on the station climatology, extreme winds are not uncommon. Additionally, the wind speed show in Figure 3 does not appear to resemble the chart of a malfunctioning station anemometer. Note: I was not able to find metadata about the station's equipment. 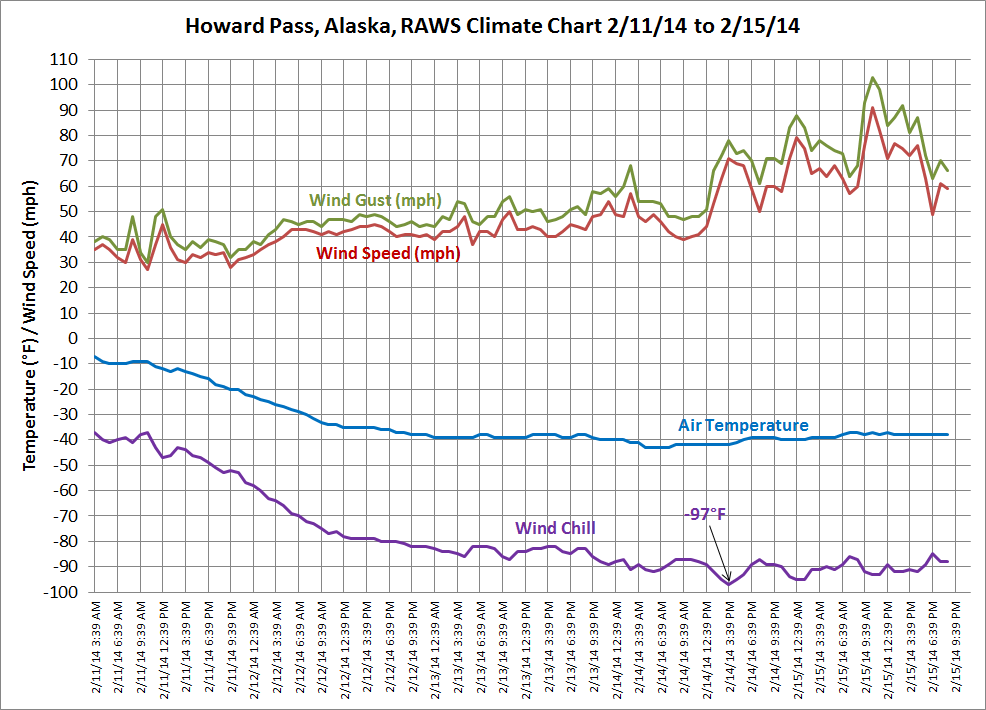 The station is located north of the Arctic Circle and by mid-February it receives only a small amount of solar radiation. Therefore, the diurnal temperature is primarily a function of advection, clouds, and vertical mixing. However, the little bit of solar energy they did receive on February 14th correlates with the spike in wind speeds which suggests some thermal mixing occurred; although the soundings indicated winds under 20 knots in the lowest 3,200'. Local topographic constriction likely influences the channeling of northerly winds through the passes along the northern slopes of the mountains. Figure 4 shows the surface map near the time of maximum wind chill. Temperatures measured in the lowest 5,000' feet as recorded by weather balloons were quite cold. The Kotzebue and Barrow RAOB soundings showed temperatures between -20°C and -25°C at 850 mb. 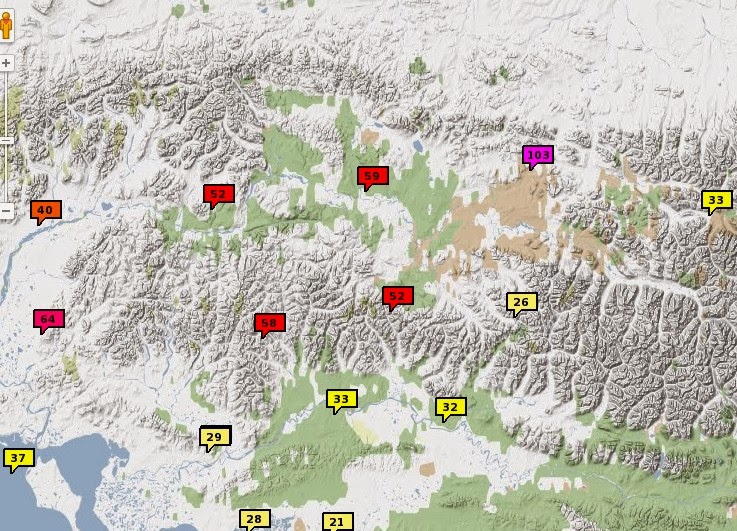 Regionally, wind speeds were high, but not necessarily extreme (see Figure 5). The direction of the maximum wind speed was north or northeast at nearly every station. Wind speeds of these magnitudes are uncommon, but not unheard of. 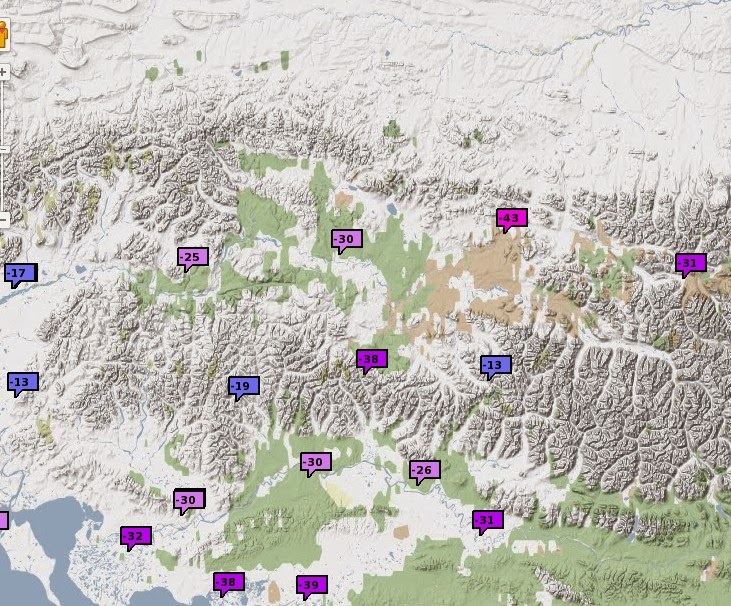 Is it a valid reading?

That is the question. Neither the high wind speed nor the low temperature are especially surprising by themselves but the combination of the two is a little curious. On the surface there doesn't appear to be a 'smoking gun' to disqualify the reading but further investigation is warranted. Richard has conducted an impressive assessment of the pre-event numerical guidance. I highly recommend reading it.

Preliminary communication with the NPS technician  (not by this blog entry's author) who installed and maintains the station indicated that the equipment is designed for this type of environment and that the wind readings are unlikely to be revised downward. The anemometer is replaced annually and the design makes readings that are too high improbable. In addition, data from the previous several seasons appears to confirm the fact that wind is funneled through the north-south oriented mountain gaps and that especially low temperatures are entirely plausible. As the data continues to accumulate, the confidence in the observations in increasing.