In view of Brian's suggestion of "further investigation" of the Howard Pass wind chill report, I thought it might be worth looking at some of yesterday's numerical model forecasts of conditions in the western Brooks Range.  The idea here is that if a numerical model forecast showed wind chill values anywhere near the reported values, this might boost the credibility of the RAWS data for this event.

There is a multitude of global weather forecasting models that could be examined for this event, but the coarse resolution of global models wouldn't tell us much about the terrain-modified flow conditions near Howard Pass.  Fortunately, the National Centers for Environmental Prediction produce a daily 5-km resolution run of the WRF forecast model in two different configurations for an Alaska domain; more information can be found here:

The model is initialized at 9 am AKST every day, which is conveniently just a few hours before the purported record wind chill measurement at Howard Pass.  Below are images showing the 6-hour forecasts of 2m temperature and 10m wind from the two alternative configurations of the model (NMM and ARW); these are forecasts for approximately the time of the minimum reported wind chill (-97F at 3:39 pm yesterday).  Note that the black contours show terrain elevation at 600m (thick line), 800m (medium), and 1000m (thin).  The location of Howard Pass is indicated with a white dot. 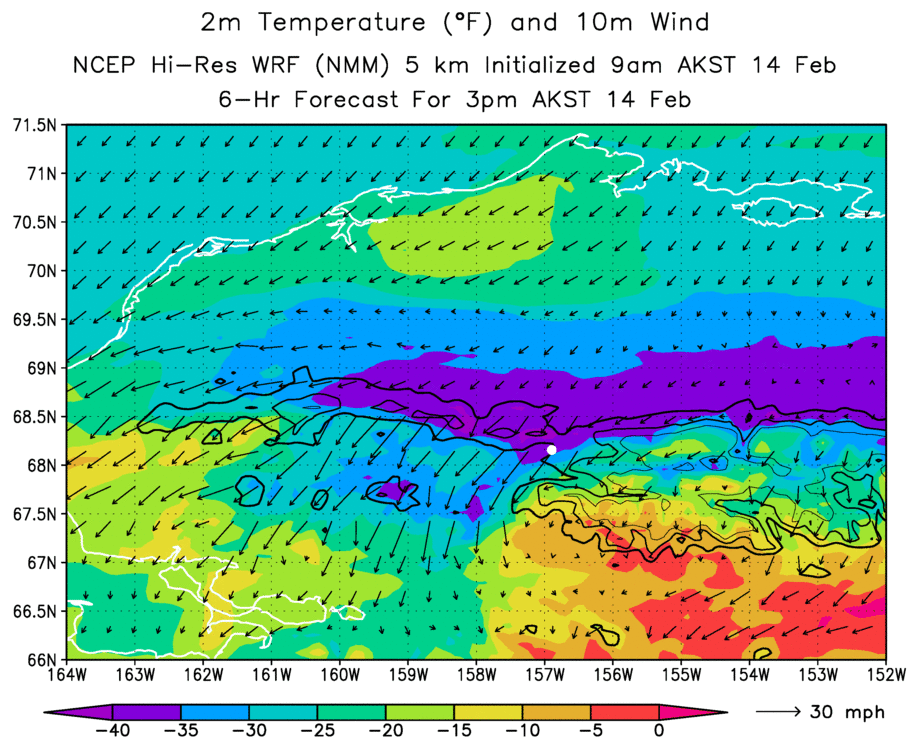 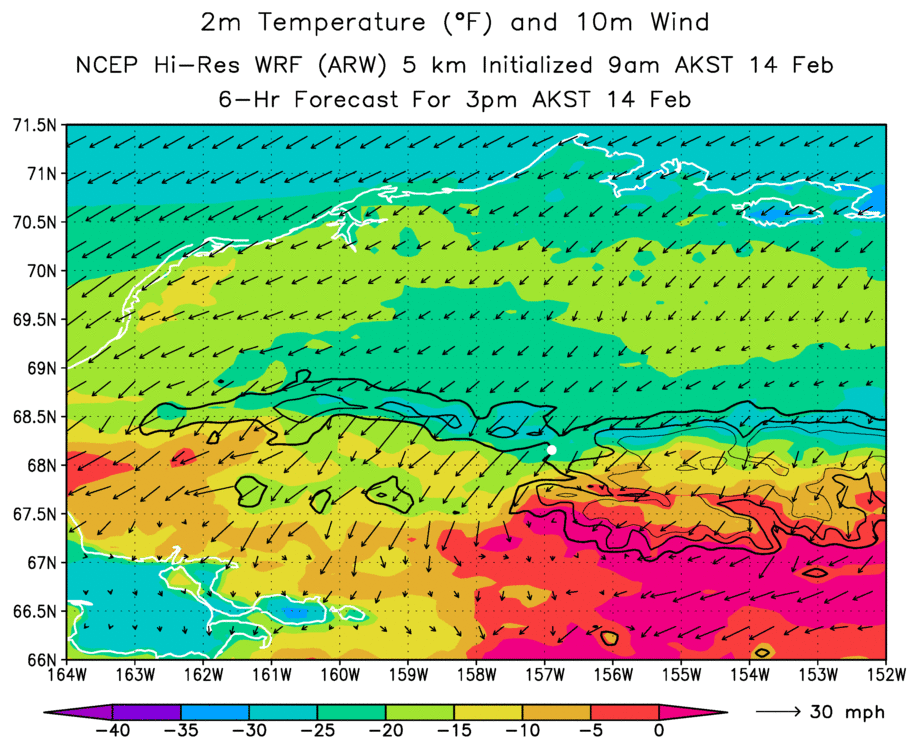 The forecasts are considerably different, with the NMM version showing much lower temperatures almost everywhere, and especially over and north of the north side of the Brooks Range.  A cursory comparison to observations suggests the NMM was closer to reality at high elevations (Killik Pass, -30F) and on the North Slope (Umiat, -34F), but the ARW was better in the lower terrain to the south and west (Noatak RAWS, -15F).

Let's look at the NMM a bit closer: the charts below show the forecast wind speed and wind chill at 3 pm yesterday.  Note that the wind arrows "begin" at the grid point that they represent, i.e. they point away from the grid point in question.  Also, not all the grid points are plotted as the grid is much finer than the arrows suggest.  The forecast wind speed at Howard Pass was only 25 mph, compared to 60-70 mph sustained according to the RAWS.  Nevertheless, with a forecast temperature of -36F, the forecast wind chill was -73F.  As one would expect, the lowest wind chills are along the ridge line where extremely cold air from the North Slope was being lifted and forced over the ridge and through gaps in the high terrain. 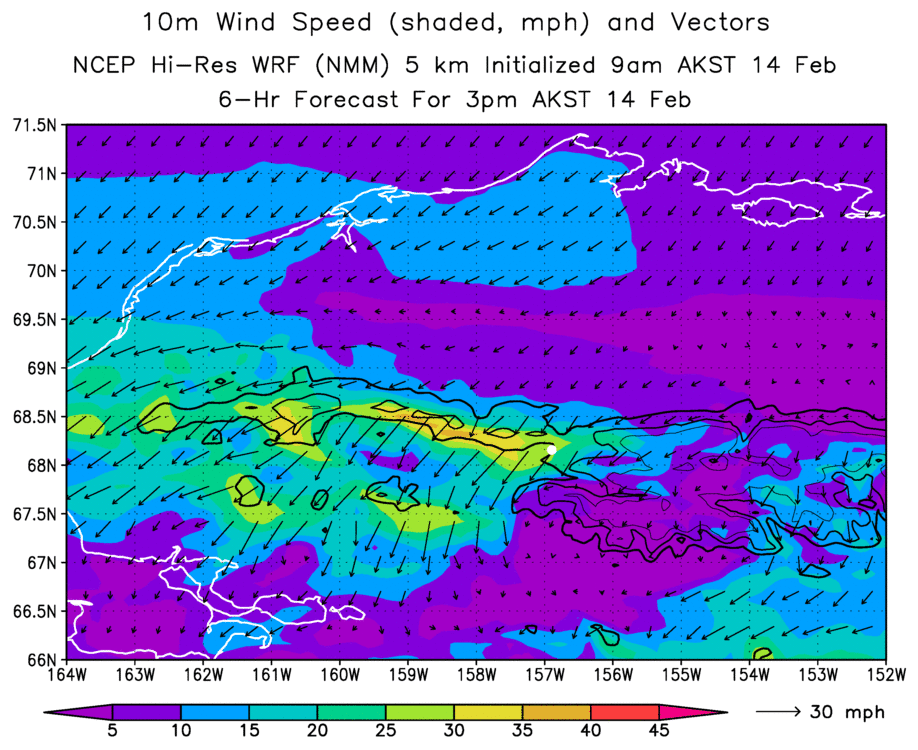 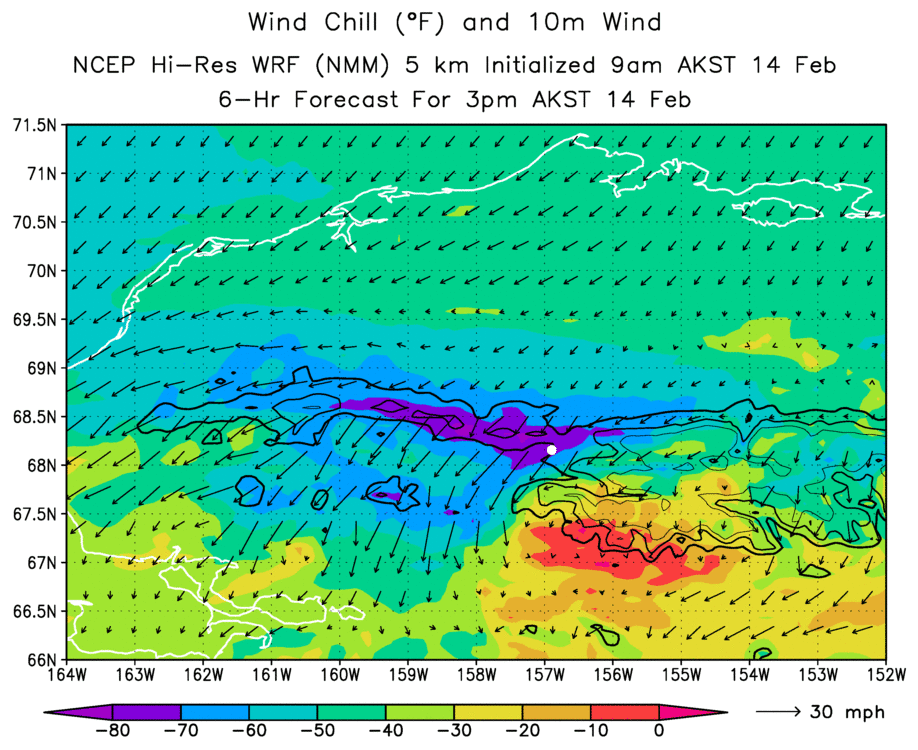 In the NMM forecast, the temperatures proceeded to drop overnight, and wind speeds increased slightly, with the result that the predicted wind chill dropped even lower by 9 am today: the forecast wind chill was below -80F over a large area near and west of Howard Pass.  The lowest forecast wind chill value at the Howard Pass location was -83F at 11 am. 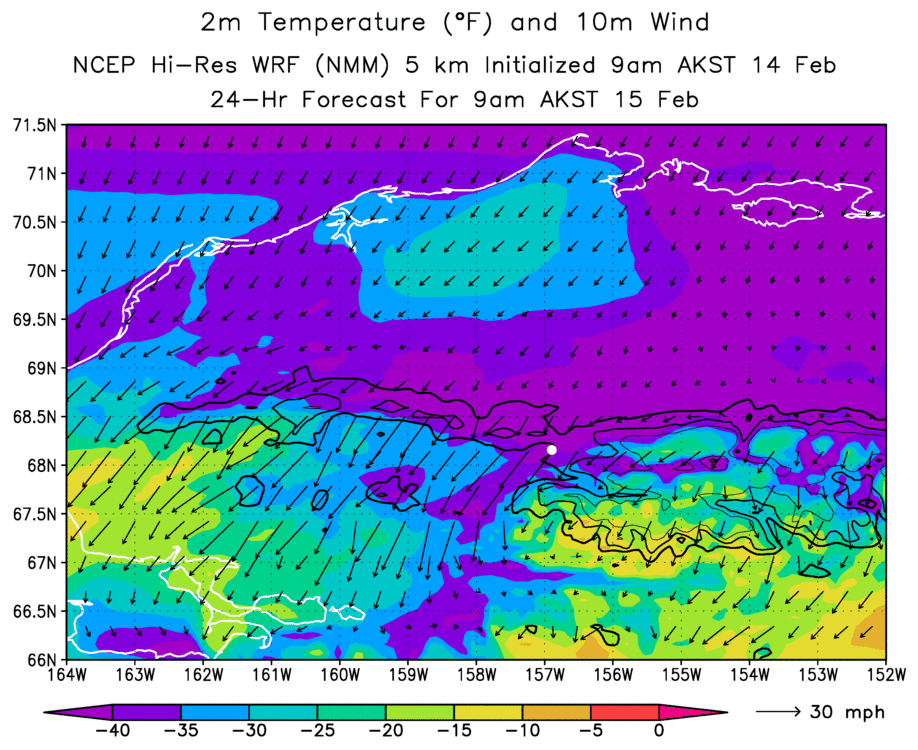 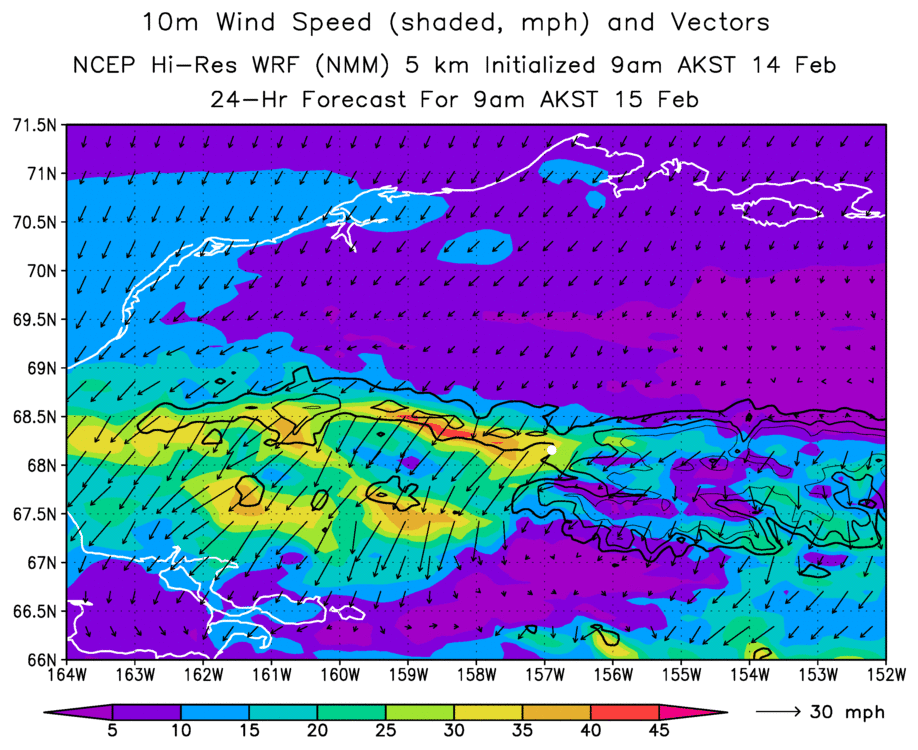 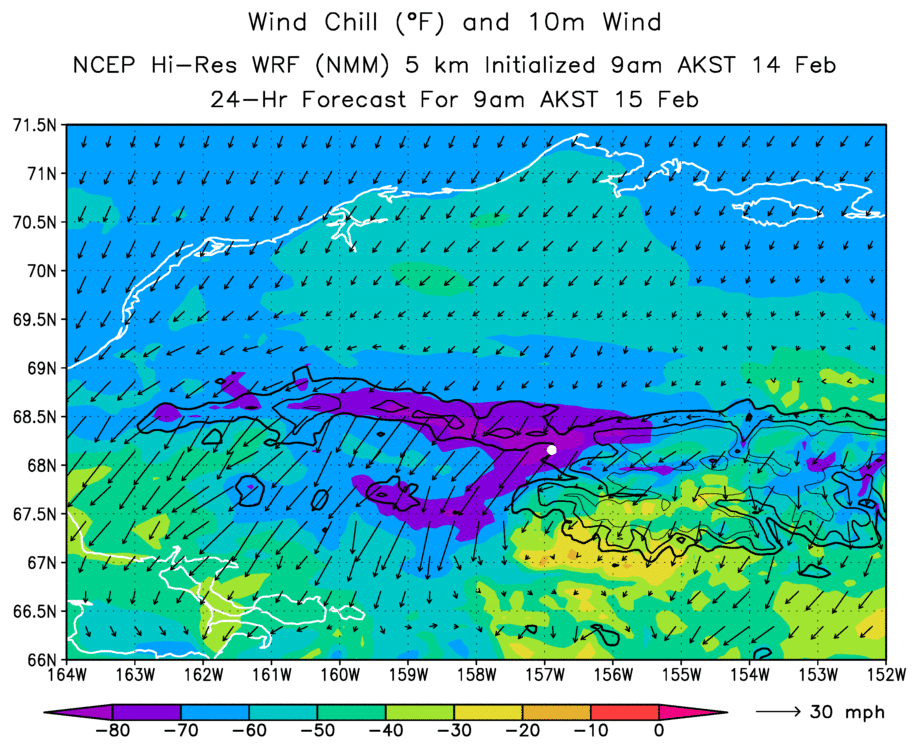 I hope to look at some of the station comparisons in more detail next week, to see if we can gain any more insight as to how well the NMM run performed.  The biggest difference from the Howard Pass RAWS data is obviously the wind speeds, which purportedly reached an almost incredible 91 mph sustained at 11 am today.  It may be that an even higher resolution model run would be required to capture the localized flow effect that would have caused such extreme speeds - if indeed they actually occurred.