Returning to the subject of historical winter cloud cover over interior Alaska (see here and here), it is interesting to look at a few locations other than Fairbanks.  In earlier discussion we surmised that the introduction of the ASOS instrumentation caused significant changes in the sky condition observations, but it seems likely that there are also decadal-scale variations or long-term trends that have contributed to the observed changes.  The charts below show the winter mean frequency of the sky condition categories in the past several decades for five interior locations.  Note that the data from Tanana fails to include any instances of "FEW" (1-2 oktas or 1-3 tenths) in the winters of 1971-72 through 1995-96, so I didn't calculate the category fractions for those years. 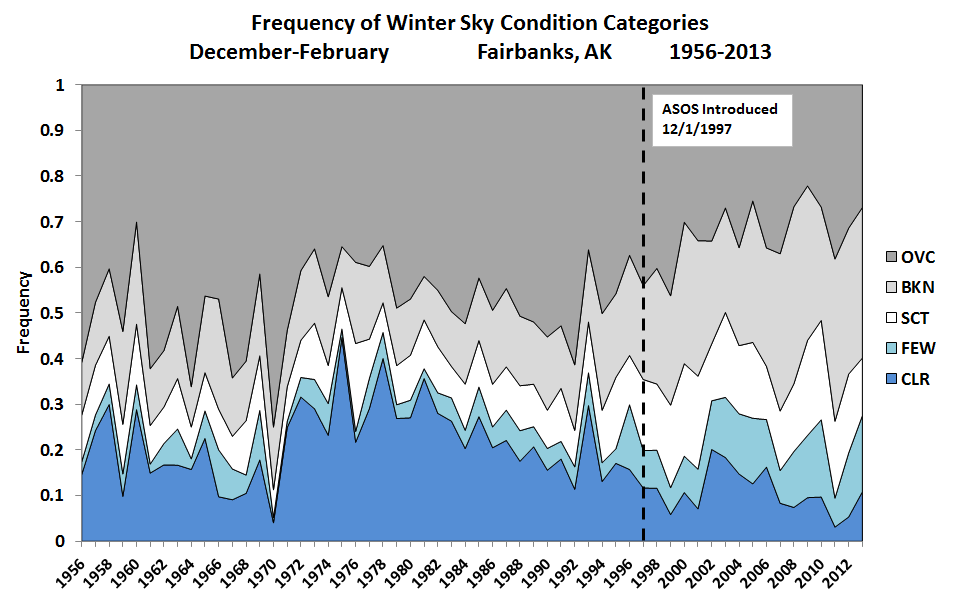 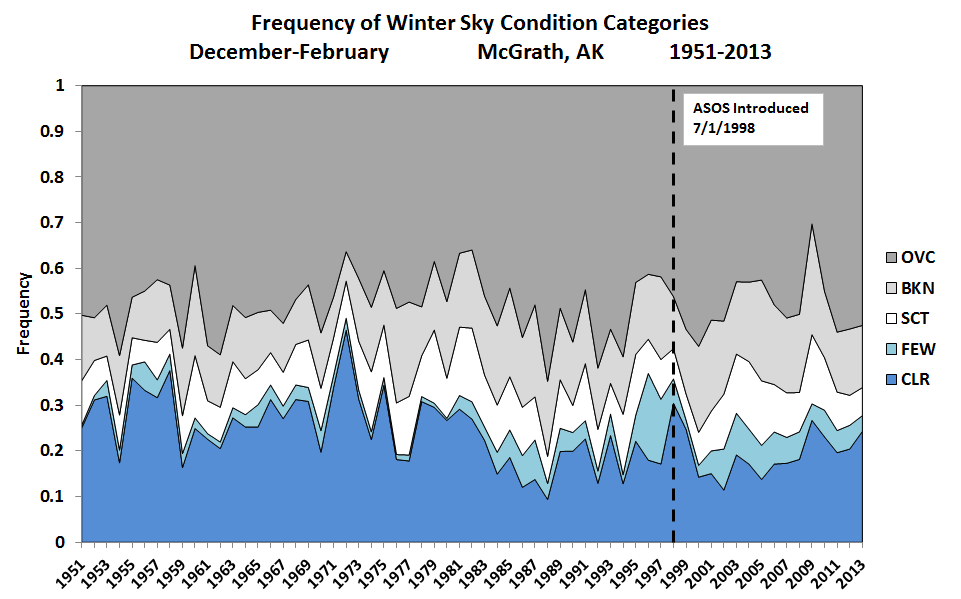 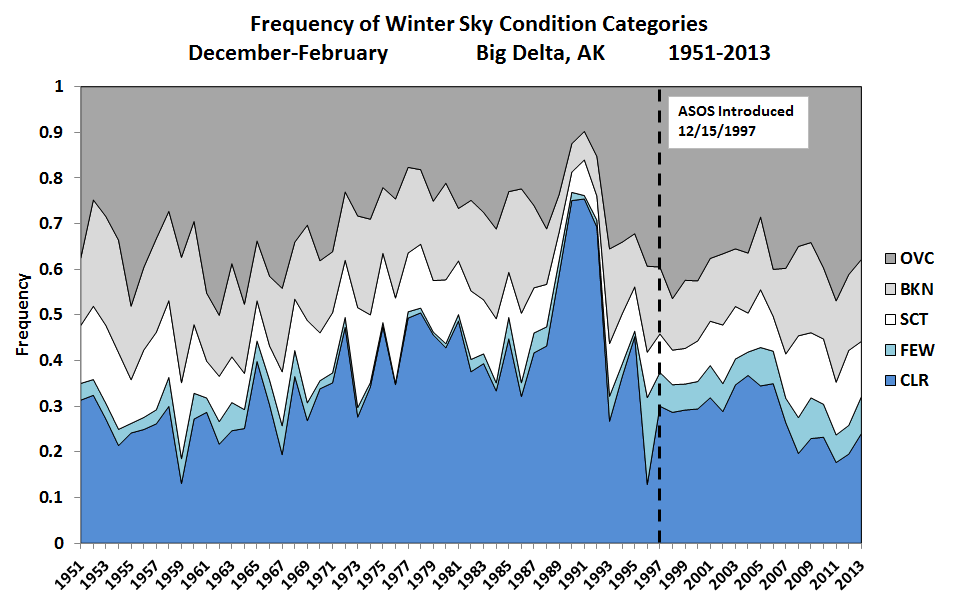 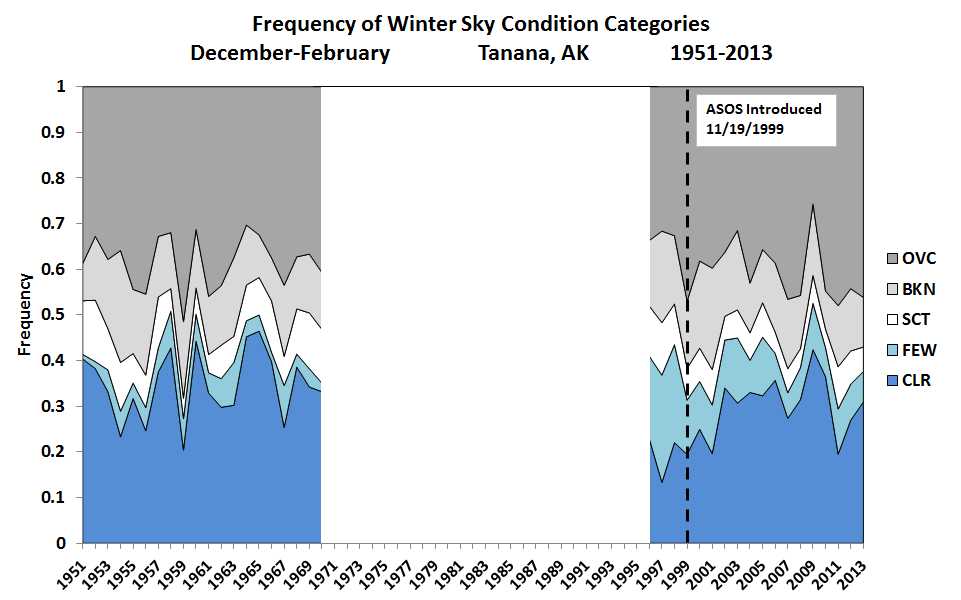 With the exception of Big Delta, the general downward trend in clear sky frequency seems fairly consistent, but as Brian and Gary noted earlier, it seems that the laser ceilometer that is part of the ASOS platform reports "FEW" with considerable frequency when skies appear clear to the human eye.  Therefore the apparent increase in "FEW" and corresponding decrease in "CLR" (especially notable at Fairbanks and Bettles) is probably an artifact of the transition to ASOS.

I've marked the dates of transition to ASOS for each location, and it's interesting to note that the "FEW" category seems to have become more common before the ASOS introduction.  This would be a puzzle if it were not for Rick's expert knowledge; according to Rick, the laser ceilometers became available prior to the ASOS transition, and it's likely that the observers (at least sometimes) began to derive their hourly cloud reports from the ceilometer readout rather than taking the trouble to go outside as in former years.  This explains how the change in cloud categories preceded the full transition to ASOS.

An interesting difference between Fairbanks and the other locations is that Fairbanks shows a large increase over time in the proportion of observations with "BKN" cloud cover (more than 50% cloud cover, but not overcast), but the other stations do not.  The timing of the change is suggestive of this also being caused by the change to automated cloud measurements, but it's odd that the other stations don't show the same thing.

I mentioned in the previous post that Fairbanks winter cloud cover may have been biased towards the overcast category in the earlier decades, because fog used to be much more common in winter, and observers used to report overcast skies during fog.  I attempted to perform a crude correction for this by making an assumption that fog in winter at temperatures below -20 °F would mostly be associated with a clear or nearly clear sky aloft.  The reason for this is that significant cloud cover aloft would provide radiative heating that would tend to warm the surface and thin or dissipate the fog; in other words, we generally wouldn't expect to observe a cold fog under cloudy or mostly cloudy skies.  (Fog can occur at warmer temperatures in association with precipitation and clouds.)

Using the assumption that fog at -20 °F or lower is associated on average with the "FEW" sky condition, I replaced all of the sky condition reports during what I'm calling "cold fog" in the historical Fairbanks data.  The following chart shows the result after combining the CLR and FEW categories; I would suggest that this chart is at least as representative of the true historical changes in Fairbanks as the top chart above, because of the fog-overcast bias in the original data. 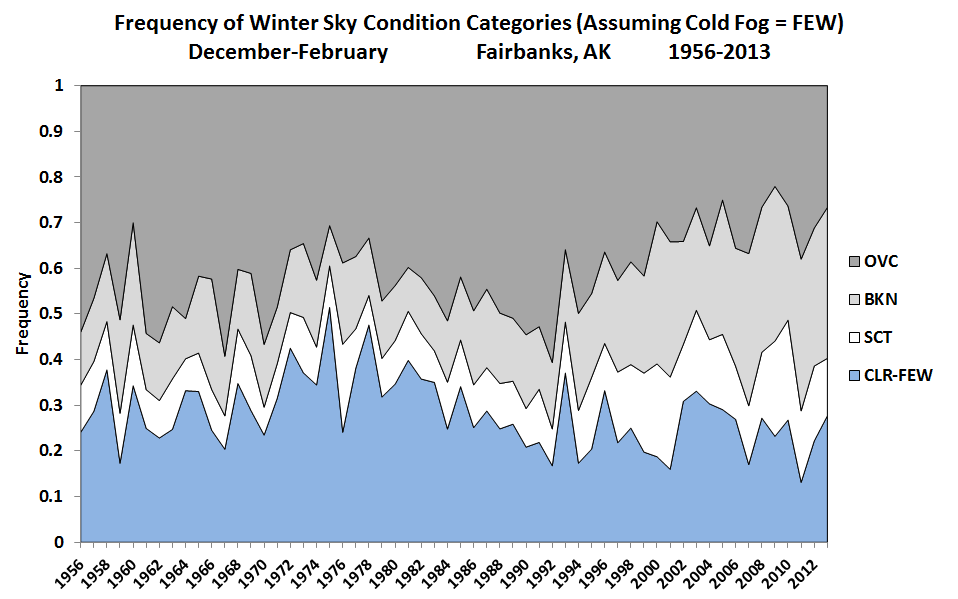 For an overall assessment of the long-term changes in cloud cover, the following table shows the linear least-squares trend in the frequency of CLR and FEW combined and of BKN and OVC combined.


After the adjustment for the fog-overcast bias in Fairbanks, the overall trend is towards more cloudiness (lower CLR+FEW, higher BKN+OVC), with the notable exception of Big Delta.  However, the very large spike up in clear sky frequency at Big Delta in the winters of 1989-90 to 1992-93 appears a bit suspicious.  An overall trend towards cloudier winters in the Alaskan interior would be consistent with long-term warming, and the increased clouds could be both cause and effect of warmer conditions.

For the sake of completeness, I also calculated the winter fog frequency and the frequency of overcast skies during fog for all five interior locations.  Fog is far less common at the other sites than in Fairbanks, and the frequency is low enough elsewhere that any bias in the cloud cover reporting during fog is unlikely to make a significant difference for the overall cloud history. 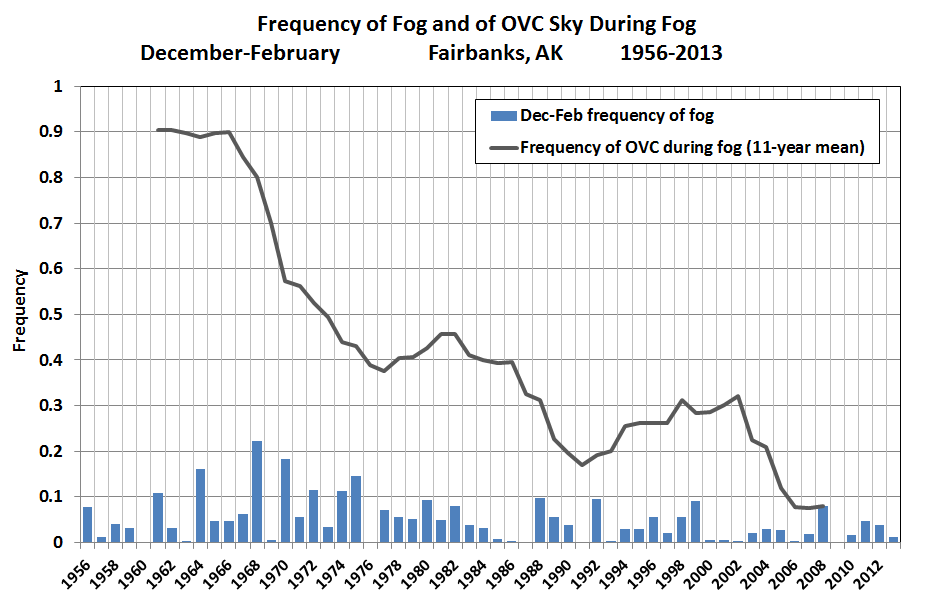 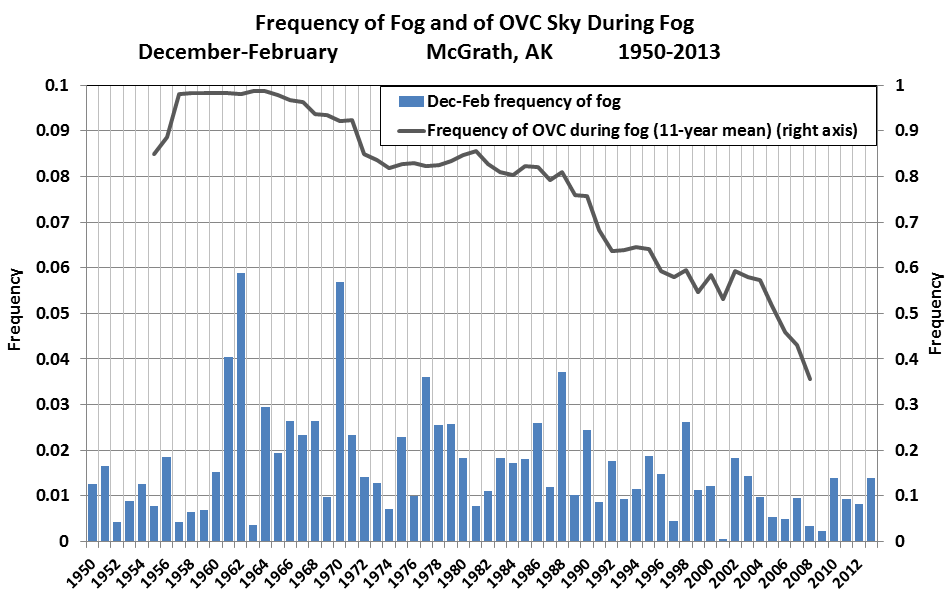 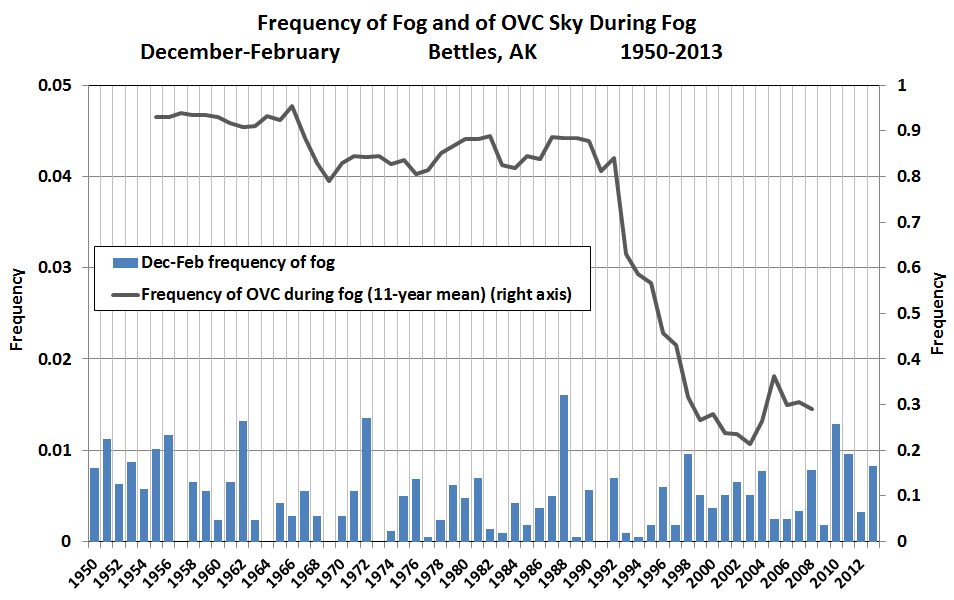 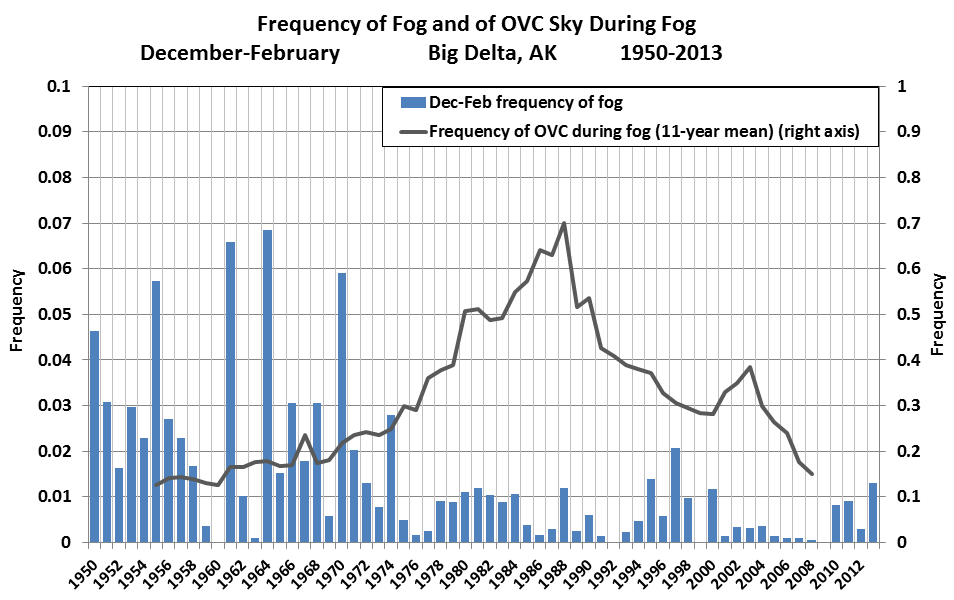 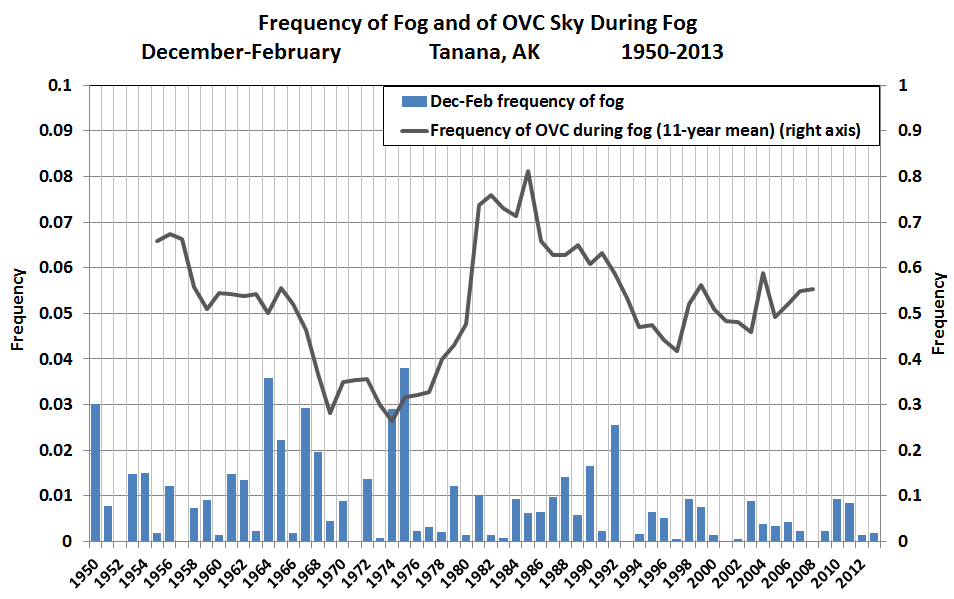 Posted by Richard James at 4:12 AM