On this blog there has often been discussion of the influence of Pacific Ocean temperature patterns on Alaska climate, and rightly so, as the evolving oceanic thermal patterns are known to create first-order impacts on seasonal (and decadal to multi-decadal) climate in this part of the world.  In this connection we usually talk about the El Niño - Southern Oscillation (ENSO) and the Pacific Decadal Oscillation (PDO) as the two big players.

A few weeks ago reader Eric suggested that we could do an objective multi-variate analysis of the impacts of ENSO and the PDO to decipher which is more important at different times of the year.  The challenge here is that the two phenomena, as they are usually defined, are not at all independent, so it is impossible to obtain a clean separation of the impacts.  However, if we could re-define the different Pacific temperature patterns to be independent of each other, then we could proceed.  This is the approach followed by Dennis Hartmann of the University of Washington in a paper published this year:

Hartmann looks at temperature patterns over a large domain from 30°S to 65°N across the Pacific and calculates the top 3 EOFs, which are the independent spatial patterns that dominate the variability over time.  The top pattern/EOF largely represents ENSO but also includes significant variability that we normally think of as the PDO (see Hartmann's figure 1, reproduced below).  The second pattern/EOF also resembles the PDO pattern, so we can think of the PDO as contributing to both EOF1 and EOF2.  Hartmann's third mode is what he calls the North Pacific Mode, and he focuses on this pattern as being implicated in the extreme circulation anomaly over North America in winter 2013-2014. 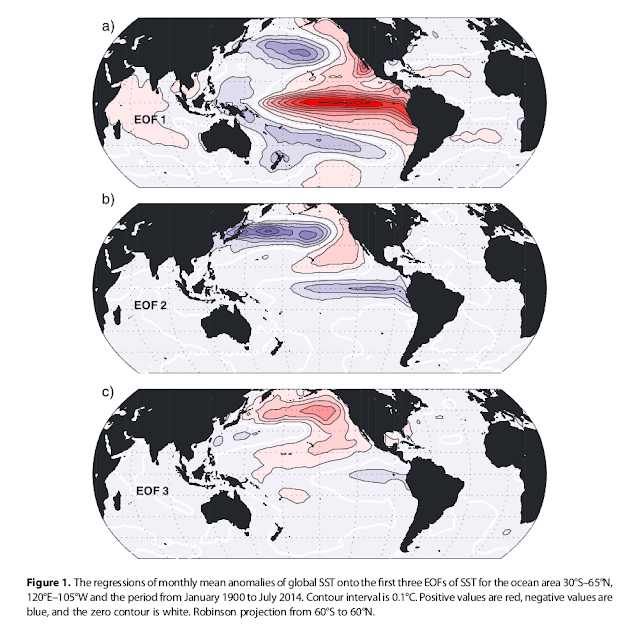 The independence of the three temperature patterns allows us to proceed with Eric's idea of a multi-variate linear regression, and so I've done this for Fairbanks monthly and seasonal temperatures since 1950.  The first chart below shows the estimated coefficients of regression between the 3 Pacific modes and Fairbanks monthly temperature.  This can be interpreted as the temperature anomaly that typically occurs in Fairbanks when each of the modes has an anomaly of 1 standard deviation; for example, when EOF1 is one standard deviation above normal in January, Fairbanks is typically 3 °F above normal.  Note that the coefficients are very small in summer for two reasons: first, because there is a less robust impact of the Pacific modes, and second because the summer temperature variability is much smaller. 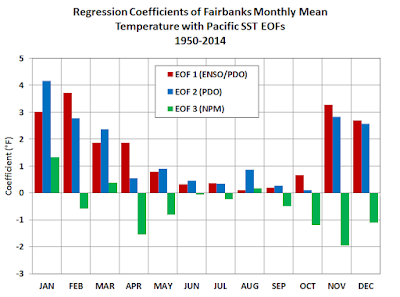 It's interesting - to say the least - that Hartmann's North Pacific Mode (EOF3) has a small impact compared to ENSO and the PDO, and it is negatively correlated with temperature in most months.  I did not expect to see this, because the North Pacific Mode is closely related to "the Blob" of warm northeast Pacific SSTs that has recently gained notoriety, and I have speculated that this anomaly was partly responsible for the warmth of the past two winters in Alaska.  This analysis would suggest that we can't pin the recent warmth on "the Blob". 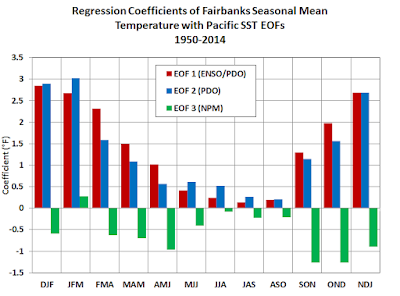 If we look at the statistical significance of the 3 predictors in the multiple regression model, we find that the impacts of the Pacific modes are generally more robust for seasonal temperatures than for monthly temperatures, as we would expect.  The charts below show the t-values of the individual regression coefficients; the t-values directly indicate the probability that the coefficients could have been obtained by random chance.  On a seasonal basis, the ENSO/PDO impacts are highly statistically significant from autumn through late spring.  The NPM also shows up as significant at certain times of the year, but with a negative coefficient as noted above. 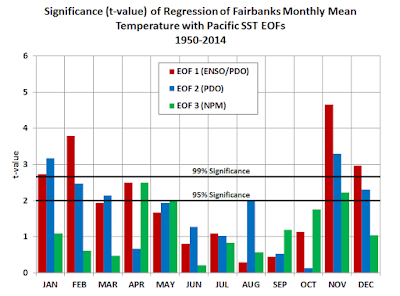 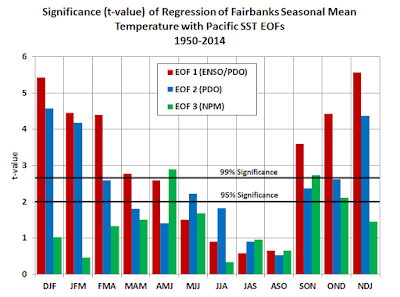 The overall correlation coefficients for the 3-predictor models (monthly and seasonal) are shown below - again generally higher for seasonal than monthly anomalies, and especially in the autumn. 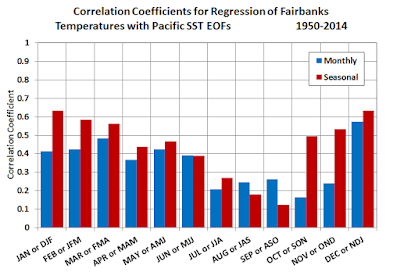 From the perspective of seasonal forecasting it is interesting also to look at the statistical impacts on a lagged basis, because of course we don't know ahead of time how the Pacific temperature patterns will evolve in the months ahead.  The chart below provides a quick look at this; here I've repeated the procedure using seasonal Fairbanks temperatures and the Pacific modes one month ahead of the first month of the season - for example, the columns for DJF show the significance of the regression between November Pacific patterns and December-February Fairbanks temperatures.  The results indicate that the predictability associated with EOF1, the ENSO/PDO mode, is largely retained at a one-month lag, but EOF2 and EOF3 lose most of their predictive power.  This is not too surprising, as the coupled ENSO/PDO anomalies evolve slowly, but the 2nd and 3rd modes can change significantly over the course of a few months. 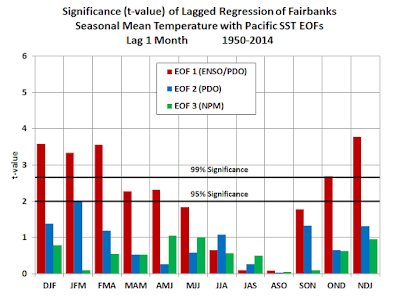 Posted by Richard James at 4:09 AM