A couple of weeks ago a reader requested that we look at the likely effects of El Niño on the upcoming winter's weather pattern in Fairbanks.  This is a big topic that could fill a series of posts, so I'll just scratch the surface here.

First, published work from almost 15 years ago indicated that El Niño winters tend to be significantly warmer than normal in the eastern two-thirds of Alaska, but the signal is much weaker over western regions.  Unusual warmth over much of the state arises from the Aleutian low-pressure zone being more intense than usual, and the associated upper-level flow brings warm air from the southwest into Alaska.  However, the phase of the PDO is also a strong constraint on the winter temperature patterns, as El Niño's warming influence seems to disappear when the PDO is negative.

Some analysis I did here shows basically the same thing, with a rather high frequency of unusual winter warmth across south-central and southeastern Alaska during strong El Niño events.  Fairbanks lies within the zone where above-normal temperatures are favored, although near-normal temperatures are also common.  Again, however, a warm outcome is largely contingent on having a positive PDO phase - which is more likely than not during El Niño, as the two phenomena are inter-dependent and positively correlated.  As far as precipitation is concerned, there is a rather strong dry signal across most of western and interior Alaska in El Niño winters.

Let's look at some maps.  The following sequence of images shows, for each month of winter, the percentage of years that were warmer than normal when El Niño conditions were in the top 10 strongest for that month.  The data come from the NCEP/NCAR global reanalysis, with "normal" defined as the 1951-2010 mean.  It's interesting to see a particularly warm pattern over interior Alaska in December and a much cooler look for January; but February is warm again.  These month-to-month variations could be partly attributable to random chance.


Here's the same map sequence for precipitation, based on a global 1-degree objective analysis from observed data (GPCC analysis, not NCEP reanalysis).  The dry signal that I mentioned earlier shows up strongly in January and February across most of the state and persists in March across the southern interior.


Now let's look at some scatter plots of historical data from Fairbanks.  First, the charts below show the relationship between monthly mean temperature anomaly in Fairbanks and an index of El Niño - Southern Oscillation (ENSO) activity; a more positive ENSO index corresponds to a stronger El Niño, and a negative ENSO index corresponds to La Niña.

There is a lot of scatter, showing that El Niño and La Niña by themselves do not have a particularly strong influence on Fairbanks winter temperatures; the correlation is slightly better for the overall winter mean (see below), but still not great.  Compare the scatter plot for the PDO, also shown below - that's a much better correlation.  Nevertheless, the plots above do show a tendency for unusual warmth during the strongest El Niño events for every winter month except January.  It's interesting that the warmest January's appear to occur when ENSO is relatively close to neutral. 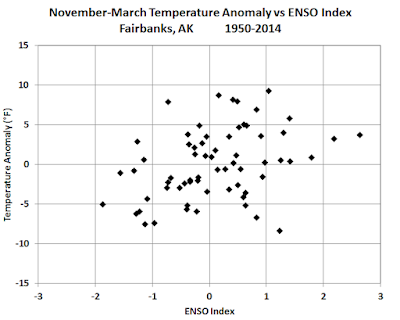 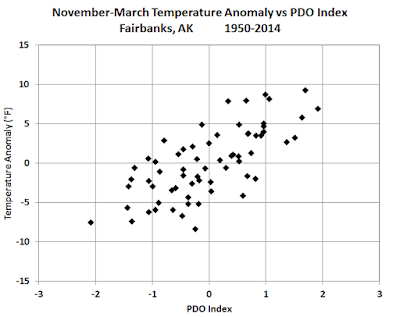 Below are the corresponding results for precipitation, with the long-term median for each month denoted with a dashed line.  It's pretty clear that late winter (January-March) is usually even drier than normal when a strong El Niño is in play.


The dry signal shows up in the overall winter mean, but again the PDO is more highly correlated than ENSO. 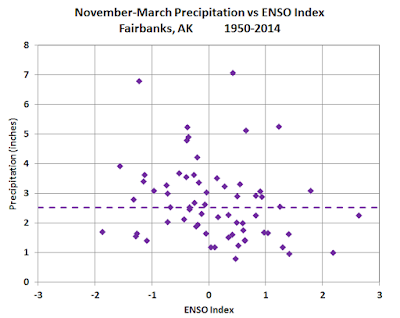 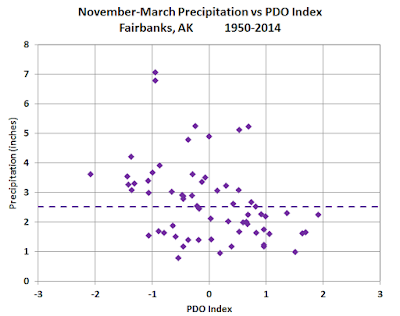 I'll mention one other aspect of El Niño's impacts on winter climate.  It has been shown in the literature that high-pressure blocking is less frequent over the Bering Sea during El Niño winters, which is consistent with a stronger Aleutian low.  The lack of blocking to the west of Alaska reduces the frequency of cold northerly flow over the state, thus contributing to the overall warming signal.  I attempted to reproduce this result with the blocking data I've used before; the map below shows the difference in frequency of blocking highs between El Niño and La Niña winters.  There is a slight reduction in cut-off high pressure centers near the western Aleutians, but interestingly the frequency rises over most of Alaska and especially the Chukchi Sea and nearby Arctic Ocean. 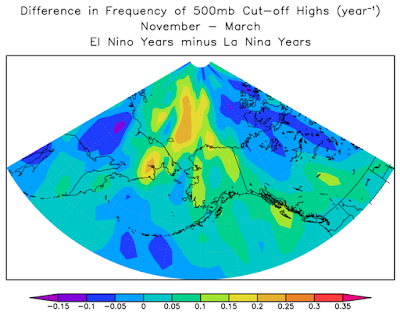 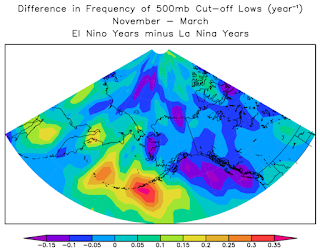 In summary, if the current El Niño episode continues in the "strong" category throughout the upcoming winter, Fairbanks can expect another warm - but perhaps not excessively warm - winter.  Much will depend on the evolution of the PDO, which is currently still positive but has seen strong fluctuations in recent months.  Snowfall is likely to be less than usual from January through March.

Posted by Richard James at 5:15 AM