Prompted by a question from reader Gary, I looked into the duration of cold snaps in Fairbanks to see if there's evidence that periods of intensely cold weather have become shorter over time.  This is not a question of how much warming has occurred in the mean - we know Fairbanks now doesn't see the extreme cold that used to occur - but rather we are asking how long the coldest conditions stick around during periods of relatively cold weather.  Here's a chart of each winter's lowest daily mean temperature since 1930. 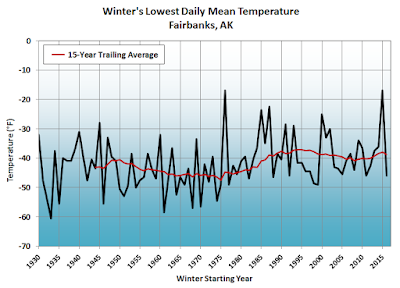 I began by looking at the evolution of daily mean temperatures during the most severe cold spells relative to the climate of two periods: 1931-1960 and 1981-2015.  It turns out that in the first of these two periods, 20% of the winters produced at least one day with a mean temperature below -50°F, and in the more recent period, 20% produced at least one day below -45°F.  We'll consider these the thresholds for a severe cold spell in the two periods respectively.

The two charts below show the evolution of daily mean temperatures for each of the cold spells within these two periods, as defined by having at least one day at or below the threshold temperature.  The events are labeled with dates indicating the first day that met the criterion (day 0 on the horizontal axis).  Notice that there were two such spells in the winter of 1933-34, but the temperature rose above freezing in between, so I would consider them as separate cold spells rather than a single long one. 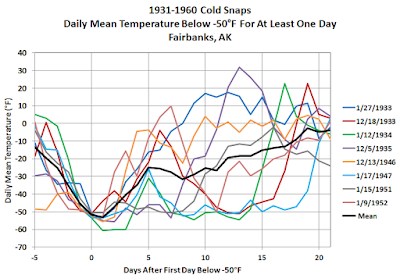 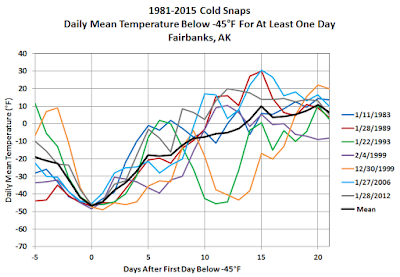 The most striking feature of the comparison is that several of the cold spells in the earlier period were lengthy, and half of the events returned to -50°F or lower more than 10 days after the initial onset.  In contrast, only 2 of the 7 cold spells in 1981-2015 returned to a similar degree of cold after a week, and then only for a brief period.

A comparison of the multi-event means for the two periods (see below) shows a divergence after 5-6 days, with the modern climate showing a tendency for continued warming after one week, while in earlier decades the mean remained lower for a few days as cold sometimes returned for an extended period.  Based on this comparison, it certainly appears that cold spells have become shorter on average in recent decades, although admittedly the sample size is rather small. 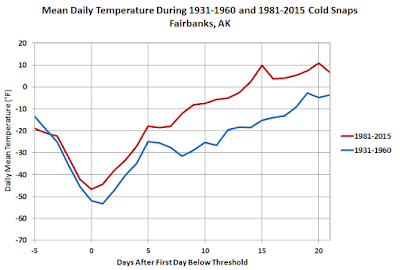 Another way of looking at the change is to track the number of days spent below the cold threshold for overlapping 30-year periods.  The columns in the chart below show these numbers, and the line and markers above indicate the threshold for cold in each period.  The overall warming trend is reflected by the rising threshold for cold snaps, but the interesting result is the marked decrease in the number of days spent within cold snap territory; in recent decades, cold snaps (as defined here) have lasted only 1 or 2 days on average, whereas 5 or more days was typical in some earlier periods of Fairbanks' history.  So not only has the climate warmed in the mean, but considerably fewer days are spent at the bottom end of the temperature distribution in the modern climate. 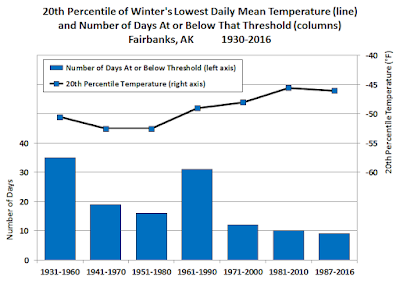 The obvious next question is why has the average length of cold spells become so much smaller over time?  A detailed answer would require analysis of the circulation patterns during the coldest episodes in Fairbanks - a project for another time.  For now I'll simply suggest that the climate of recent decades seems to have precluded the kind of persistent trough over eastern Alaska and western Canada that would be required to maintain very cold conditions in Fairbanks.  Even in last week's cold spell we saw that the ridge over western Canada was reluctant to budge, and as a consequence the trough had a difficult time progressing eastward; and so for much of the time the flow over Fairbanks had a southerly component, and moisture and clouds made their way up from the Gulf of Alaska.  Cloud cover was much more sparse over the western interior, and so of course those areas were much colder.  It would be interesting to look at historical cold spell durations in, say, McGrath, to see how they compare to Fairbanks.

Posted by Richard James at 7:17 PM