This year's fire season produced about 650,000 acres of wildfire in Alaska, which is very close to the median annual acreage since 1990.  Two-thirds of the total acreage burned in July, and this is similar to the past two years, even though 2015 total acreage was far higher.  Over the long term, July is the most active month for fires, but if it's not a very active year then it's not uncommon for June to produce more acreage.  August is only a significant month for fires during very active fire years. 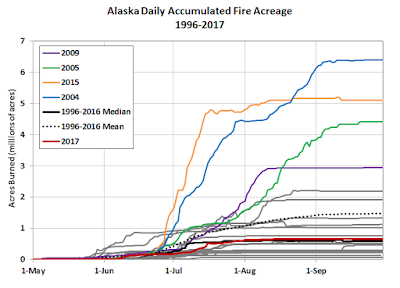 A quick view of the geographical distribution of fire acreage in the northern half of the state is available from the acreage breakdown between the federal fire management zones: 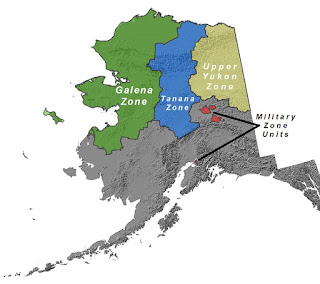 This year 63% of the state's total fire acreage occurred in the Upper Yukon zone, which is the highest percentage on record (1990-present), although of course far higher acreage totals have occurred in previous years. 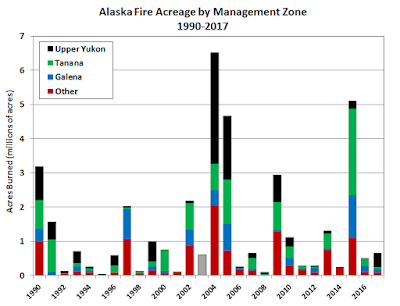 It's interesting to note that the Upper Yukon fire acreage is easily the most variable of the zones from year to year, while the Galena acreage is the least variable.  It would be interesting to explore how this is related to systematic differences in inter-annual variability of warm season weather conditions from west to east across northern Alaska; presumably the summer weather patterns vary from "very unfavorable" to "very favorable" for fire in the northeast, whereas the northwest is more often somewhere in the middle.

Posted by Richard James at 5:53 AM