In the wake of Tuesday's extraordinary rainfall in Fairbanks, it's worth taking another look at the modern climate record (Weather Bureau/NWS era, 1930-present) to see if heavy rain events have become more common.  Back in July, I commented on the long-term increase in July rainfall in Fairbanks and showed that the change has been dramatic for the heaviest events such as those with 1" or more in a single day.  However, these events have become less common in August, and from a year-round perspective there seems to be little evidence that recent events are unprecedented - see the chart below. 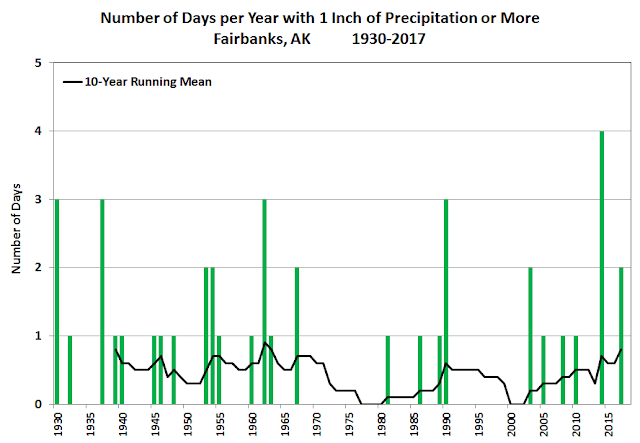 Perhaps a slightly more robust method is to look at 2-day precipitation totals rather than individual calendar day totals, because heavy precipitation events often span the arbitrary midnight boundary of a calendar day.  The chart below shows the annual counts of 1-inch precipitation totals in either 1 or 2 days; I'm calling these "unique" 2-day totals because I've subtracted the number of single-day 1-inch events that would otherwise be counted twice.  See Rick Thoman's explanation here for more detail on this kind of approach. 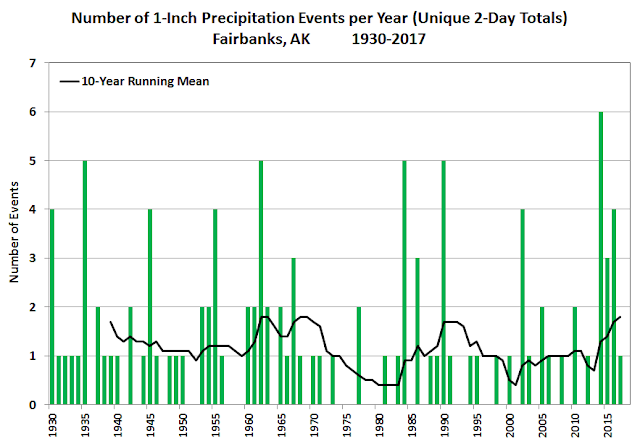 However, this is not quite the end of the story.  Owing to the fact that most of the heaviest precipitation events occur in summer in Fairbanks, the charts above are heavily weighted towards summer; for example, 80% of 1-inch daily precipitation events have occurred in June through August (33 of 41 days since 1930).  But what about relatively heavy events in the rest of the year - perhaps not exceeding an inch in 1 or even 2 days, but still extremely heavy for the time of year?

The chart below shows that 2-day precipitation totals above 1 inch have occurred in every month of the year in Fairbanks, even in the normally very dry months of February through April; and so there have been plenty of events in the dry season that I would label as "heavy precipitation" even though they would not be terribly unusual by summer standards.  So what happens if we ask how the frequency of relatively heavy precipitation events has changed over time? 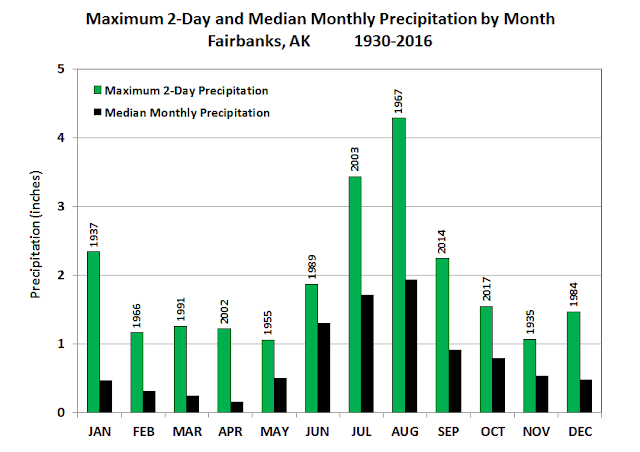 I've attempted to answer this question by pulling out the top 5 precipitation events for each calendar month, so 12x5=60 events in total.  The chart below shows the number of these events per year; for example 1935 had 4 separate events with 2-day precipitation in the top 5 for the month.  Note that I used unique 2-day totals throughout, and I did allow for more than one event in a single month if they were separated by a few days (this has happened a few times). 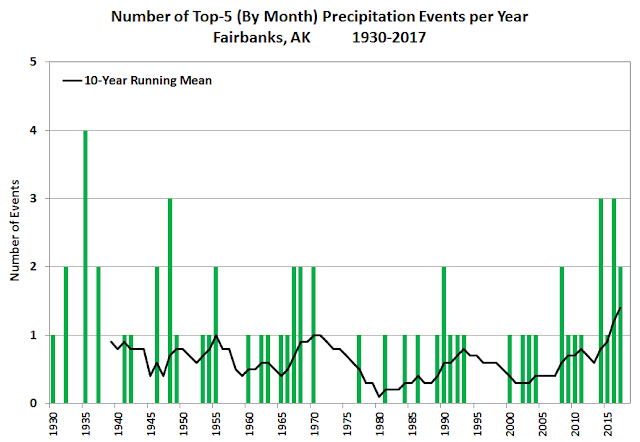 The picture is now a little different, as we see that the current 10-year running mean is the highest in Fairbanks history.  Remarkably, the past three and a half years have seen 9 separate heavy precipitation events that were respectively in the top 5 for the calendar month.  Here's a list of them, along with links to comments on this blog:

The September events of 2014-2016 are particularly notable, and without them the chart above would be less striking.

In summary, when we classify heavy precipitation events with a threshold suited to the wet season, then we see little evidence of a notable increase in Fairbanks in recent years.  However, if we classify major precipitation events for each month separately - and these events are still quite substantial even in the dry season - then the past few years do stand out as unusual and indeed unprecedented in the modern climate record.