Why Do Some Octobers have Low Snow?

Hi, Rick T. here. This came up on Twitter recently, and it seemed interesting enough to warrant more than a graphic and 144 characters: recent Octobers in Fairbanks have not brought very much snow.

Here's a plot of October snowfall since 1912 as well as the 10-year running median. The usual cavaets apply to the pre-1930 totals, though there are no obvious problems with the daily data underlying these totals. However, overall some of the cooperative era totals are very likely a little lower than would be measured in the post 1930 Weather Bureau/NWS era. From this graphic you can see that the last time Fairbanks had a foot or more of snow in October was 2008, and the ten-year median is now at the lowest level since the late 1960s, suggesting the current October snow drought is not dissimilar to what happened in the 1960s. So a question is: why low-snow Octobers? 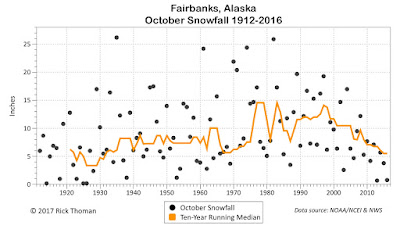 There are of course two distinct ways that Octobers can have low snowfall in Fairbanks. One way is that precipitation falls as rain instead of snow and the other is that there is little precipitation of any type. Over the course of the month both these factors can come into play, e.g. a rain event during the first week of October (nothing unusual about that) and then it's dry for three weeks (also not terribly unusal).

Here's an attempt to assign one or the other of these factors to low-snow Octobers using just the monthly data.  Since we're interested in low-snow Octobers, I've ignored years with near to above normal snowfall: that is, snowfall above the 33rd percentile (which turns out to be 5.9 inches). So, for Octobers with 5.9 inches of snow or less, I ask: was the total precipitation for the month below the 25th percentile (0.45 inches)? If so, then I ascribe the reason for the low snow that month to the fact that it just did not precipitate much. Otherwise, I chalk up the low-snow October to the fact that there was significant rainfall during the month. The results of applying this method to the historic record are plotted below. By this metric, most low-snow Octobers (24 of the 35 years in the significantly below average category) are due to low precipitation total. No surprise, since histroically the bulk of precipitation in October in Fairbanks falls as snow. However, in 11 years in the past century (and two in the past four), low October snowfall can be attributed to significant precipitaiton that happened to fall as rain. It's fairly obvious that there is no long term trend, but it is interesting between 1970 and 2011, a 40 year stretch with frequently high snowfall totals, only one October was a "low snow 'cause it rained" month. 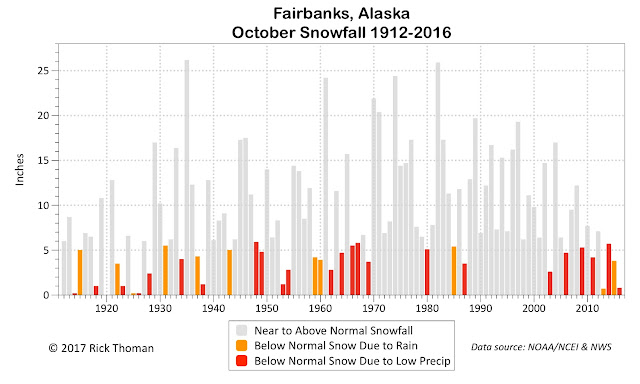 A more detailed analysis of the daily data might reveal additional interesting details on this question.
Posted by Rick at 5:58 AM