As the snow melts away this evening in Fairbanks-land under the influence of chinook flow (with temperatures generally in the 40s), long-range forecasters are watching the tropical Pacific to see if the incipient La Niña episode will continue to strengthen.  If it does, then we would not expect abnormal warmth to be the theme of the winter in southern and interior Alaska; instead, some notable cold episodes would be rather likely, but variability would also be high - perhaps not unlike the recent swing in temperatures.

A new tool that forecasters will be using this winter is an upgraded version of the seasonal model from the well-known European Centre for Medium-Range Weather Forecasts (ECMWF).  In addition to having better physics and higher resolution in both the atmosphere and ocean simulations, the system now includes a coupled sea-ice model, leading to a much better representation of inter-annual variability and trends in ice conditions.  In my view the lack of a sea-ice model in the previous version was a rather major shortcoming.

In preparation for the release of the model upgrade (version 5), I've been looking at the performance of the model using the historical retrospective forecasts that are provided for bias correction and calibration.  The figures below show summary statistics (correlation coefficient) for forecasts of sea surface temperature in the equatorial Pacific (Niño3.4 region) and in the North Pacific (PDO and NPM indices); I'm showing results for the NMME models as well as versions 4 and 5 of the ECMWF model.  (See this post from last year for some background information.) 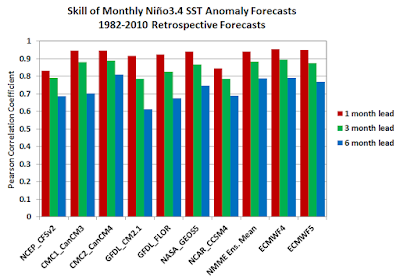 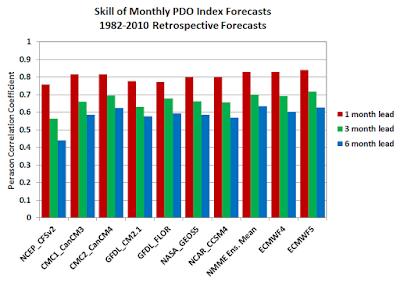 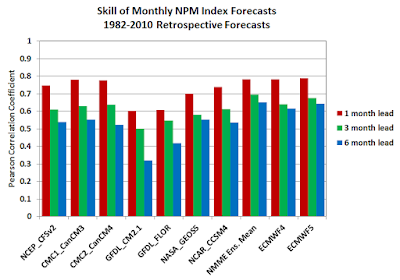 I also looked at forecasts of several of the most important atmospheric teleconnection patterns that meteorologists tend to monitor, including the PNA (Pacific/North American) pattern and the EPO (Eastern Pacific Oscillation).  Both of these atmospheric circulation patterns are closely connected to Alaska's winter weather; for example, the 4-panel of maps below shows the 500mb height and surface temperature patterns associated with the positive PNA (top) and negative EPO (bottom) phases, both of which tend to bring unusual warmth to most of Alaska.


The opposite PNA and EPO phases are shown below (negative PNA on top, positive EPO on bottom).  To appreciate the significance of these two patterns, consider that the November-March PNA and EPO index values (which are actually independent of each other) jointly explain about two-thirds of the November-March temperature variance in Fairbanks; so we can "predict" the Fairbanks winter temperature with a mean absolute error of only 2.0°F if we know the PNA and EPO index values.

In view of the significance of these atmospheric "modes", it's of interest to see whether the models can predict them on seasonal time scales.  The leftmost sets of columns in the charts below show that the answer is yes, and the PNA and EPO forecasts are actually quite good compared to several other teleconnection indices such as the North Atlantic Oscillation and the Arctic Oscillation. 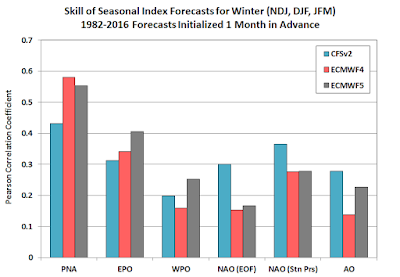 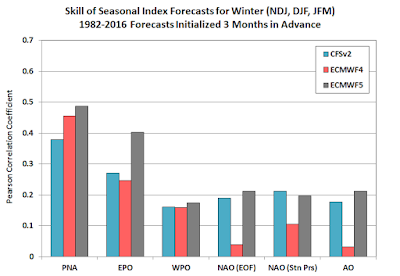 It's also encouraging to see that the ECMWF's upgraded model is considerably better at predicting the EPO pattern, and this bodes well for seasonal winter forecasts in Alaska.