I don't often comment on the weather and climate of southern Alaska, but this week a very interesting paper was published looking at long-term snowfall accumulations high on Mt Hunter in the Alaska Range.  Here's a summary from the Weather Company

and here's the study itself

The paper begins by reminding us of the dramatic increase in winter precipitation that has occurred in recent decades at coastal sites in southern Alaska, for example (and most strikingly) a more than 50% increase in rain and snow at Kodiak.  The chart below shows the December-February precipitation totals since 1950 at Kodiak; note that the increase essentially occurred as a step change in 1976 when the PDO suddenly flipped from negative to positive.  The median December-February precipitation changed from 13.9" (1950-1975) to 23.6" (1976-2016), an increase of 69%, but there has been no significant trend since 1976. 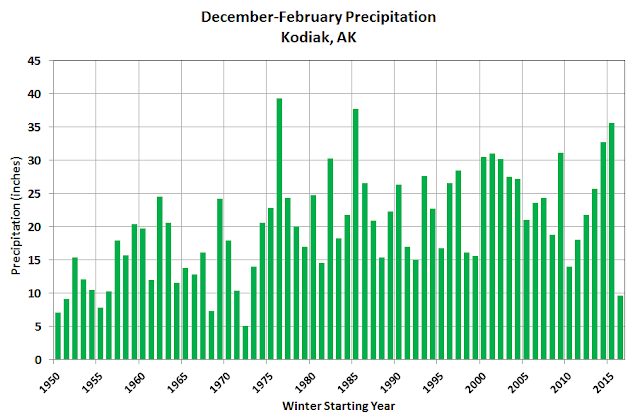 The precipitation estimates from Mt Hunter, as published in the new study, show a very dramatic increase over the past 1000+ years, and they also indicate that snowfall has continued to increase in the past few decades.  Interestingly the 1976 Pacific regime shift is not particularly clear in the Mt Hunter data (see below); a more pronounced increase occurred after 1985, and the highest estimated totals occurred in the last decade of the data (which ends with the winter of 2010-2011). 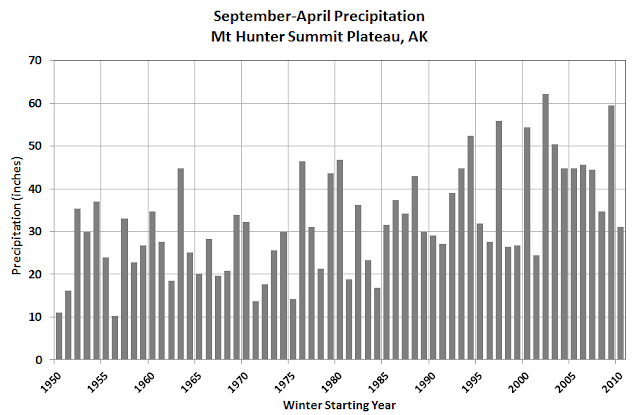 The absence of a 1976 step change at Mt Hunter raises a question as to how closely the precipitation amounts are connected to the North Pacific circulation pattern.  The authors of the study argue that the long-term strengthening of the Aleutian Low is the main driver for the long-term increase in Mt Hunter snowfall, so this is an important point.

The chart below shows two measures of North Pacific atmospheric variability that are referenced in the paper: the Pacific-North American (PNA) index and a North Pacific (NP) pressure index; both of these are closely related to the strength of the Aleutian Low.  The usual definition of the NP index means that it's more negative when the Aleutian Low is stronger, but I've defined it with an inverse sign to line up with the PNA.  The 1976 regime change is evident for both indices, but as with the Kodiak precipitation data there has been no significant increase since then - in fact the PNA index has zero trend since 1976 and the NP index has a negative trend. 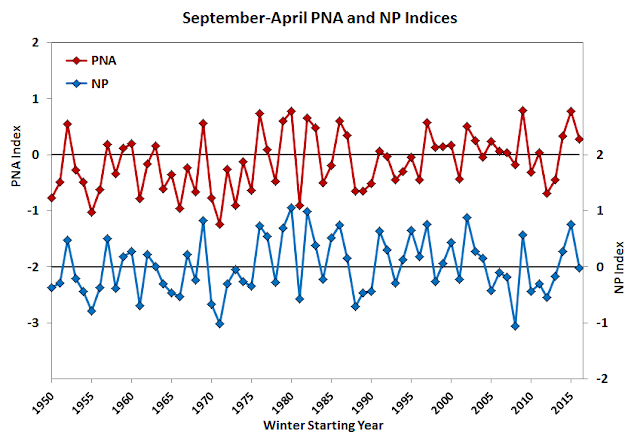 A scatter plot of the PNA index versus Mt Hunter precipitation (see below) reveals a fairly robust connection with - as it turns out - the same correlation for 1950-1975 and 1976-2010.  The correlations are slightly lower for the NP index (+0.39 in both periods). 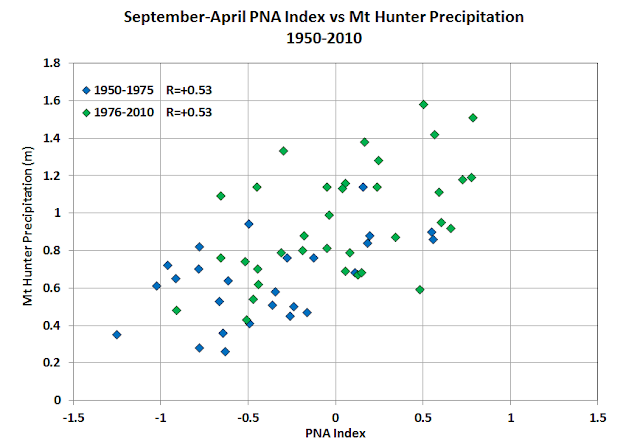 It's clear from these results that the Mt Hunter data does reflect an influence of the Aleutian Low, but it's equally clear that we can't explain the most recent (post-1985) increase in snowfall by invoking continued strengthening of the Aleutian Low.  The published study alludes to this point and suggests that the explanation for the most recent changes may be a sustained increasing trend in ocean temperatures far away in the western tropical Pacific Ocean; these tropical changes may have caused shifts in the atmospheric flow near Alaska that are not reflected by the PNA/NP indices and/or the sea-level coastal precipitation measurements.  The authors describe this hypothesis as "a heightened sensitivity to tropical SST teleconnections at higher elevation in Alaska".

While I don't have any particular comments on the tropical-connection hypothesis, I thought it would be interesting to look "closer to home" for potential explanations for the most recent increase in Mt Hunter snowfall.  To begin, I calculated the portion of the Mt Hunter precipitation that cannot be explained by a linear regression with the PNA index - see below.  The most obvious aspect of the chart is the preponderance of high precipitation totals, and the absence of small totals, since 1988-89. 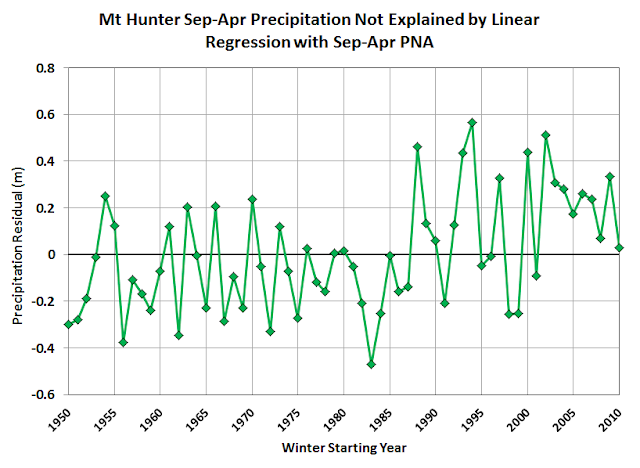 It's not immediately obvious what major climate regime shift could have caused a change like this in 1988; as we noted before, the PDO shifted in 1976, and the Atlantic Ocean shifted into a much warmer state (positive AMO phase) in 1995; but I'm not aware of any notable shifts in or around 1988.

To dig in a little deeper, I calculated the correlation between September-April sea-level pressure and the Mt Hunter precipitation residual.  The results show an interesting signal related to pressure over the Chukchi Sea - see below.  When low pressure prevails over the Chukchi Sea, then Mt Hunter snowfall tends to be higher than the PNA would suggest, whereas high pressure to the north and northwest of Alaska tends to occur with lower Mt Hunter snowfall amounts. 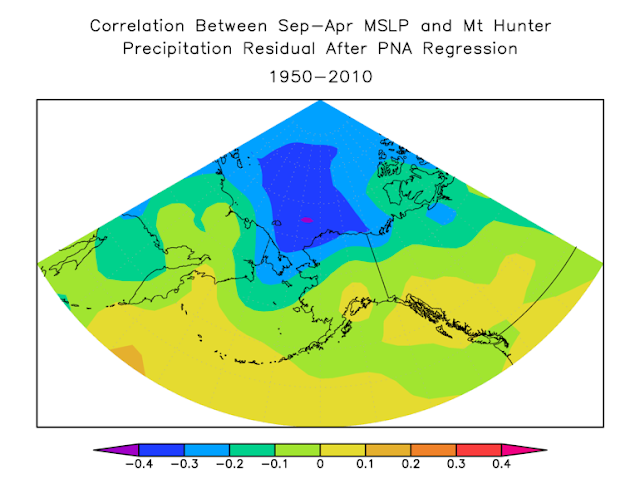 Looking at an area-average of sea-level pressure over a box from 65-80°N and 160-180°W, we see an apparent shift to lower values beginning in the late 1980s (see below), so this lines up rather well with the unexplained recent increase in Mt Hunter snowfall.  A scatter plot of the annual pressure and precipitation residual values (second chart below) reveals a 1976-2010 correlation of -0.48, which is nearly as good as the underlying PNA correlation that we started with. 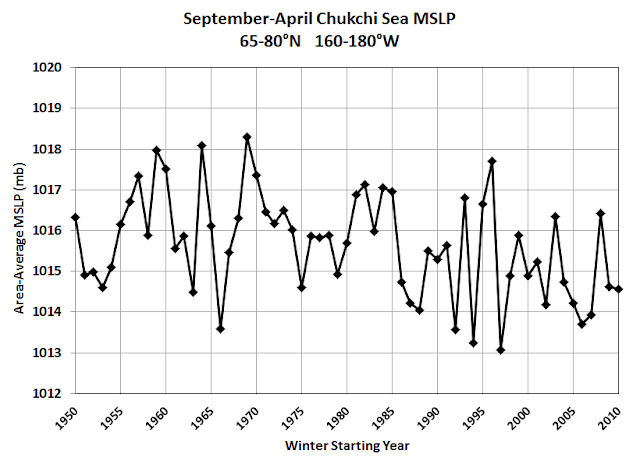 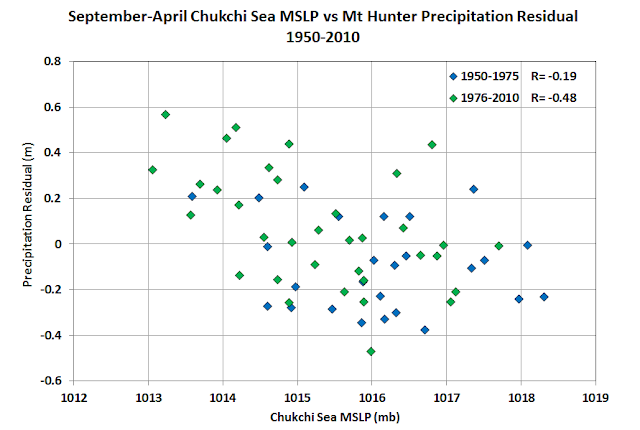 Of course correlation does not prove causation, but there does seem to be some evidence here that lower pressure to the north and northwest of Alaska may have contributed to the continued rise in Mt Hunter snowfall in recent decades.  How would this work from a physical standpoint?  Lower pressure to the north would seem to favor episodes of strong westerly flow across all of Alaska, and while southerly flow is most favorable for heavy snow in the Alaska Range, it's conceivable that westerly wind events could also transport ample moisture into the high terrain.  Further investigation is clearly required to see if there is really a plausible physical connection to storminess in the Chukchi Sea.

In summary, the remarkable hydrological changes that have occurred recently on Mt Hunter and presumably elsewhere in the Alaska Range appear to have some connection to Arctic weather patterns as well as to the North Pacific circulation.  This raises the interesting possibility that the recent reduction in Arctic sea ice may also be implicated, perhaps by altering the winter flow patterns around Alaska in a systematic way.

Posted by Richard James at 7:22 PM