Unusual warmth is prevailing across Alaska with remarkable persistence so far this month, and yesterday was the warmest day yet for the interior; McGrath reached 39°F, Fairbanks made it to 41°F, and Bettles (at nearly 67°N latitude) hit 38°F.  The Bettles high temperature tied the record for the month of December, with data back to 1951.

Looking at the joint history of climate data from these three interior sites (1951-present), there is only a handful of days when all 3 locations reached 38°F or higher on the same day in the depths of winter (December through February).  It has happened only 6 other times, with the most recent occurrence being nearly 8 years ago (Jan 17, 2009).  January 2009 was also the last time that the daily mean temperature was at least 2 standard deviations above normal for all 3 of these sites on the same day in winter (November-March).

With respect to persistence, we are currently at 11 straight days with a combined mean daily temperature (for the 3 sites) of more than 1 standard deviation above normal.  The record for November-March is 13 days, so by this metric we're closing in on a record warm spell for the interior.

The chart below shows the kind of warmth that's been observed by the soundings from Fairbanks; for the first half of this week, temperatures were around 40°F or higher at about 600' above the surface.

Here's the 500mb height analysis from 3pm yesterday.  If it looks oddly similar to the chart from last week... that's because it is. 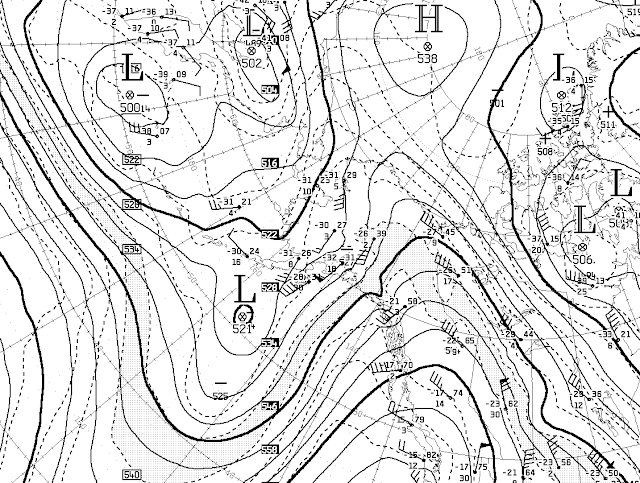