How cold will it be when the ball drops on New Year's Eve in New York City is, for better or worse, in the news, so I (Rick T.) thought it might be interesting to look at New Year's Eve temperatures in Fairbanks.

With a little work I was able to pull together the temperature near midnight each December 31st since 1941 (thanks to Brian B. for a last minute data access rescue). These are the temperatures from the the Weather Bureau Cushman Street office for 1941, Ladd Field 1942, Weeks Field 1943-50 and Fairbanks International since New Years Eve 1951. I've used the observation closest to midnight Alaska Standard Time, which has typically been between 1150 and 1155pm, though a couple years in the World War Two era the closet observation was about 1130pm. I've used the standard time zone that was in effect at the time, so there is the one hour change in 1983. Hopefully then, this reflects the temperature (at the official observing site) at the time when Fairbanksians were toasting in the New Year. So here's what we get: 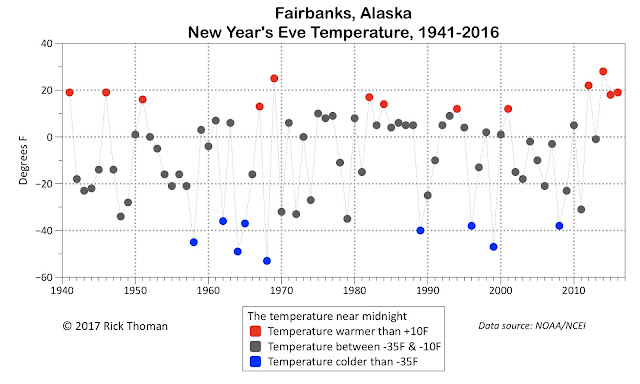 The first thing I notice is the 81F range of temperatures: the warmest New Year's Eve temperature was +28F in 2014, the coldest -53F in 1968, and the standard deviation is a whopping 20F. The second thing that stands out is that there seems to be a lot of New Year's Eve with temperatures near to slightly above 0F. This may be something of a surprise, given that the average temperature (in the 1981-2010 normals) for Dec 31 is -7F. In fact, the distribution of New Year's Eve temperatures (below) is typical of mid-winter temperatures in Interior Alaska, with a marked "left skew". That is, a long tail to the cold side, and a short tail to the warm side. This makes physical sense: in the absence of solar heating,  there are a lot of ways for an inland valley at 65N to be cold but very few ways to be really mild. I will not get into the details here, but my working hypothesis is that this kind of distribution, with evidently two peaks, centered, in this histogram at -20F and +10F, and the long cold tail is the outcome of two distinct temperature regimes: clouds vs. no-significant clouds. 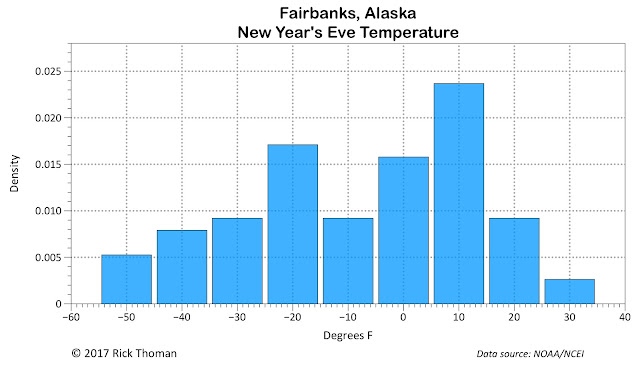 Lastly, just glancing at the first plot above, the recent mild New Year's Eve temperatures not withstanding, there does not appear to a strong trend in the temperatures, though there are notably fewer years at 20 below or lower since the early 1980s. In fact, there is something of trend toward warmer New Year's Eve temperatures. The linear regression (green line below), which is effectively modeling the mean value and is sensitive to outliers, does not meet the threshold for significance (i.e. we can not say with reasonably high confidence the apparent increase is not due to simple random variation). However, if we are concerned with the median New Year's Eve temperature (not sensitive to outliers), then the trend of 21F warmer now than in the early 1940s does meet a statistical significance threshold. 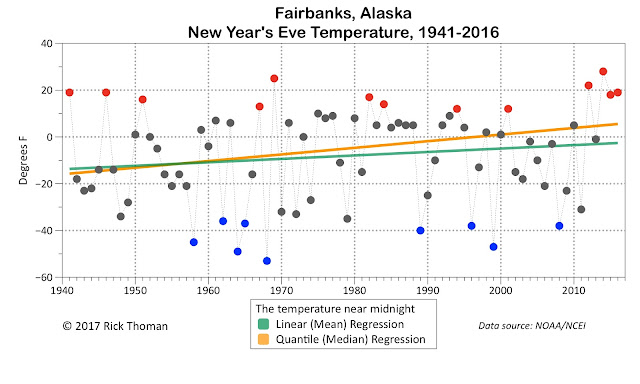 So what will the upcoming New Year's Eve bring? Well, the airmass is likely to be pretty mild, and there is reasonable agreement that there will be a broken to overcast cloud cover, so I'll go with a comparatively mild ringing-in of 2018.  Happy New Year to you and yours, and thanks for reading Deep Cold. --Rick T.