In pondering the nature of winter warm-ups over Alaska, I find it interesting to consider how much of the atmospheric column rises above freezing, even while surface temperatures usually remain below freezing, at least for most interior locations.  In the most recent case, for example, the Thursday afternoon sounding from Fairbanks reported that nearly 20% of the atmosphere (by mass) was above freezing above the Golden Heart City.  The deep layer of above-freezing air is evident in the diagram below where the red line (the temperature trace) extends to the right of the diagonal blue 0°C line from the surface up to about 800 mb.

If we look at historical Fairbanks sounding data back to 1958, we find that the deepest layer of above-freezing air observed in December was in 1985, when the freezing level was way up around 8000 feet above ground (above 750 mb) on the 11th of the month.  The most extreme case to occur at any time in winter was the amazing warm spell of late January 2014, as documented here.  In that case over 30% of the atmosphere by mass was above freezing, and that's higher than normal for the height of summer.

The chart below shows a box-and-whisker depiction of the history of monthly means of the above-freezing fraction.  The numbers are calculated by adding up the pressure depth of each above-freezing layer in each sounding, after interpolating the freezing level(s) between reported heights.  Note that the record values labeled on the chart are for the monthly means, not for individual events.  It's interesting to note the sustained extreme warmth observed in some recent years in spring and summer, but not so much in winter. 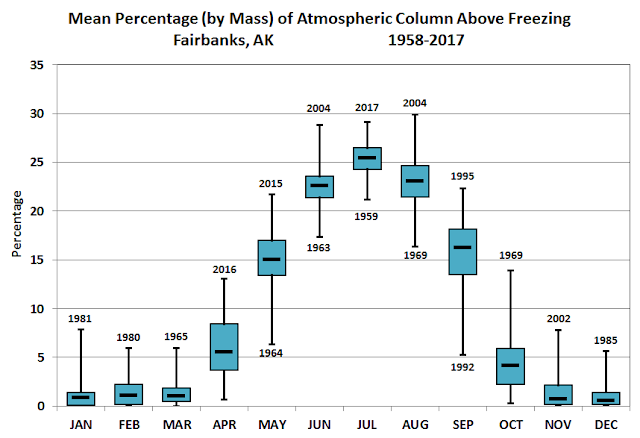 A quick look at trends by month reveals that April is easily the month with the strongest warming trend based on this metric; the trend is actually quite remarkable (see below).  The mean value for June-August also shows a statistically significant upward trend, but I'll refrain from making a similar statement about the winter trend as a highly non-Gaussian distribution makes the statistics a bit more tricky. 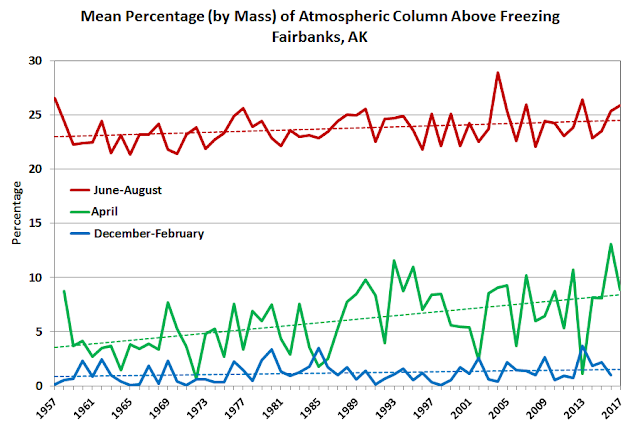