Freeze-up is progressing at an extremely slow pace this year in the Arctic and near-Arctic ocean waters surrounding Alaska.  The latest sea ice analysis from the National Weather Service continues to show a very large region of open water in the Chukchi Sea, and it's only in the past couple of days that the coastal water has frozen up at Utqiaġvik (Barrow). 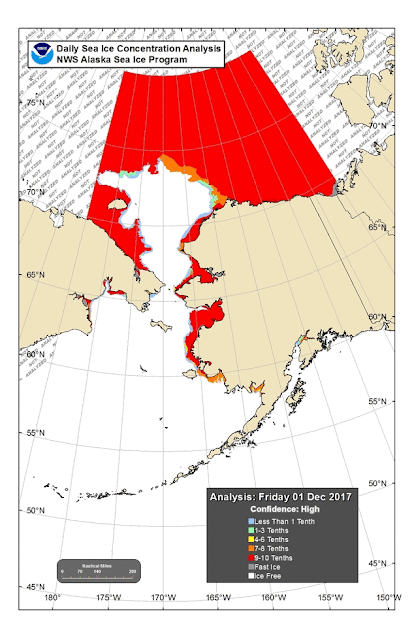 The absence of ice in the Chukchi and Bering Seas is unprecedented for the time of year in the period of record since satellite monitoring began.  According to the NSIDC's regional sea ice index, the Chukchi Sea's ice extent was 25% below the previous record (in 2006) as of yesterday.  Another way of looking at it is that yesterday's ice extent was equal to the 1981-2010 normal for October 13; so in comparison to that reference period, we could say that freeze-up is running about 7 weeks late.

Here's a chart of the historical November average ice extent for the Chukchi and Bering Seas.  This year's November average of 320,000 km2 is very nearly the same as the 1981-2010 normal for September, when seasonal melt-out reaches its peak. 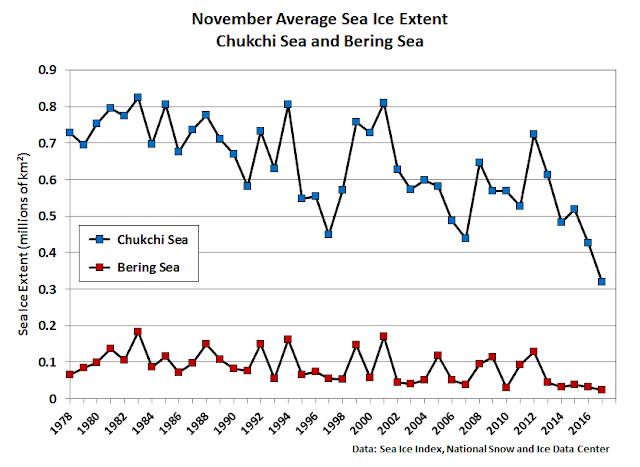 And here's a simple animation of the last 10 days of ice analysis.  From 1979-present, the Chukchi Sea has never failed to freeze up completely before the end of the year (last year it got there on December 30); but this year it still has a long way to go.