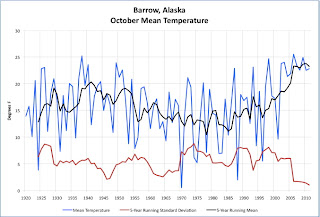 It was another very mild October in Barrow, thanks to the lack of sea ice until the last days of the month. The average temperature of 22.8F was 5.6 degrees above the (new 1981-2010) normal. Here is a plot of October mean temperature in Barrow since 1920. It is plain that there is no precedent in the past 91 years for the sustained warm Octobers that Barrow has in the past ten years. Note also the bottom red line: this is simply the 5-year running standard deviation. The collapse of variability in the past decade is amazing, but completely expected: Barrow now has a maritime climate in October. This is the cleanest case of ongoing change climate in the instrumental record in Alaska
Posted by Rick at 9:43 AM