Recap of the November Cold Snap

The record setting cold snap of November 2011 is history. So, without the media hoopla, here’s what happened. It's important to emphasize that the "news" here is the early occurrence of the cold snap, rather than the absolute values of the temperatures. The exact same temperatures anytime between Thanksgiving and Valentines Day would be unexceptional.

The mean 500mb heights (30dm contours) for November 15-21 (courtesy of ESRL and NCEP/NCAR Reanalysis) show a classic pattern for cold weather in Interior Alaska, with a high over Chukotka and fairly low height northerly flow across most of mainland Alaska (I’ve added centers and arrows to indicate wind direction. 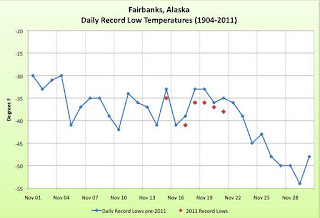 Most places with a long period of observations set six or seven daily records. Lowest temperatures for the cold snap include:

As more cooperative info becomes available I'll update the extremes.
Posted by Rick at 10:38 AM