How Unusual is this Cold Snap?

An interesting, and increasingly asked question is: "how unusual is this cold snap?"

Thus far, three days have had maximum temperatures of -20F or lower (Saturday will likely be the fourth). Eleven other Novembers have had three or more such days and six have had four or more.

The lowest temperature (thus far) has been -41F; this been exceeded in nine other Novembers.

However, this event is occurring not toward end of November, but around the middle of the month.

Another way to look at this, though probably of dubious value, is to ask when the last time a cold snap set four daily record lows? Answer: September 1992, a "black swan" event if ever there was one in Interior Alaska. I say dubious because three of the four records broken were what are sometimes called "low hanging fruit", as can be seen in this plot of November daily record lows for Fairbanks: 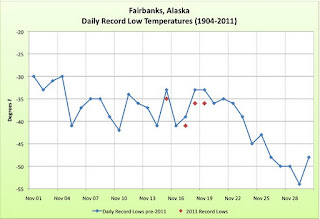 Disclaimer: While I have doubts about the veracity of some of the pre-1930 data, it's what the NWS uses for daily records, so I include it here.

The three record lows of 33 below were the only records that high after November 4th. From this point onward only one day has a record lower warmer than -36F.

So, is this event unprecedented; no. Unusual? You bet; similar cold snaps at this time of year have occurred only a handful times in the past 106 years, and this may approach the coldest early season prolonged cold snap (before late November), though I'd guess at this point the 7-day record low mean of -26.5F set in 1989 will stand.
Posted by Rick at 11:03 AM