The numerical models have been forecasting a major storm in the northern Bering Sea for mid-week since Thursday, and are now coming into focus. Here is the 3AM AST (1200 UTC) run of the GFS, with a 944mb low just northwest of St Lawrence Island at 3am Wednesday. This is very likely to produce major coastal flooding on the southern Seward Peninsula coast. The models are also forecasting the low to remain very strong as it moves into the Chukchi Sea, and this could well cause major flooding at Kivalina Wednesday night or Thursday, and even the western North Slope coast after that. The current sea ice coverage analysis from the US Navy shows no significant ice cover in the Bering or Chukchi Seas. 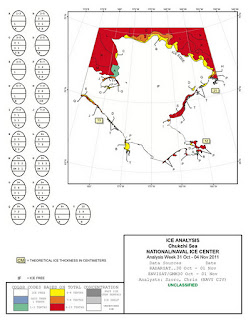 This will be a dangerous storm.
Posted by Rick at 8:56 AM