The Longest Subzero Stretches in Fairbanks

The high temperature at the Fairbanks Airport was at 0F or lower from November 24th through Dec 9th, 15 straight days, and I asked what is the longest such streak. Readers Dana TM and Richard both opined the record was about a month.

The correct answer is…it depends: either 30 or 43 days is the longest streak,

Since the winter of 1929-30, when the Weather Bureau, and then later the Weather Service have been responsible for weather and climate observations for what we call "Fairbanks". For temperatures, this has been the midnight to midnight calendar day since then. During this time, the longest streak for the temperature remaining zero or lower is 30 days, from January 9th through February 7, 1953. So a month is an excellent guess.

However...there is an even longer steak in the pre-Weather Bureau era of Fairbanks climate records.

The first weather observations were made in the new town of Fairbanks in September 1904 by staff of the Episcopal Church — the very first monthly form is signed the Rev. Hudson Stuck, well known at the time as the "mushing Bishop" and even better known today as one of the leaders of the first successful submitting of Denali. In the summer of 1911 the observation program was transferred to the Agricultural Experimental Station, which at the time was in the boondocks five miles west of Fairbanks but is now on the UAF campus, where daily weather observations are still made.

In December of 1917, the Agricultural Experimental Station reported a high temperature the entire month of -11F. This is much lower than any other other monthly maximum temperature (the next lowest is +5F in January 1966). Is this another example of bad observations? Almost certainly not. 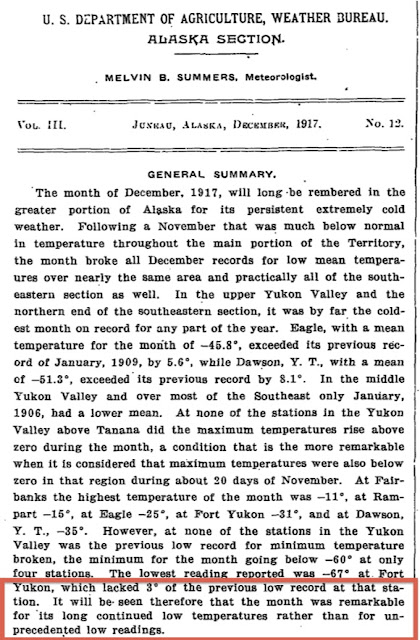 Here is the narrative summary published in "Climatological Data" for December 1917. The author, Melvin Summers, was the Meteorologist-in-Charge at Juneau, which was the only "full" Weather Bureau station in Alaska at this time. Mr. Summers notes that every station in the "Yukon Valley", what today we would call the Interior, had a high below zero (though there were no higher elevation stations in operation at the time). Mr. Summers also noted that the temperatures were more notable for the consistency of the cold rather than being especially extreme. This puts the high of -11F at the Experiment Station in context. It is consistent with other observations in a way that, say, the reputed high of 99F in July 1919 is not.

In fact, the Experiment Station reported high temperatures of zero or below every day between November 23, 1917 and January 3, 1918, 43 straight days, and I'd say that this is valid.