Another Warm October in Barrow

To nobody's surprise, October was substantially warmer than normal in Barrow again this year.  Barrow's persistent October warm anomaly has been discussed here several times before, including:

The chart below shows the October mean temperature in Barrow each year since 1930, with markers colored according to which (long-term) tercile the temperature fell into (credit to Rick Thoman for devising this illuminating chart presentation).  This year was the 14th consecutive year in which the October temperature fell within the upper tercile.  Interestingly the past 2 Octobers (2014, 2015) have been the coolest of this 14-year sequence; I wonder if Barrow might experience a "near-normal" October sometime soon. 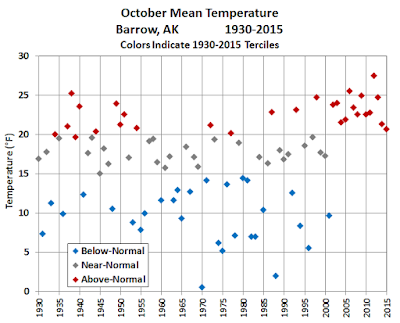 Prior to 2002, the highest frequency of warm Octobers in Barrow occurred in the 1930s, 40s, and early 50s; but the climate regime back then was nowhere near comparable to the modern state, as much colder Octobers regularly occurred in between warm years.

I thought it would be worthwhile to look at a few other climate observing stations around the Arctic, to see if extreme October warmth has also been observed elsewhere in recent years.  The map below shows the stations I looked at. 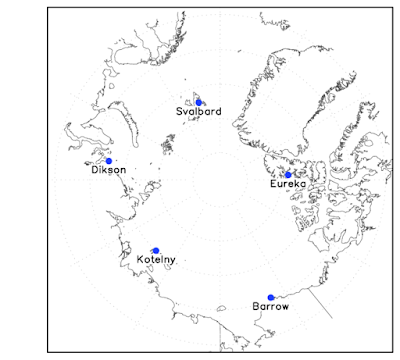 Proceeding westward from Barrow, the following charts show the time series of October mean temperatures at each location.  Svalbard and Eureka have shorter periods of record, so I didn't create the long-term terciles for those locations.  The Russian stations on Kotelny Island and at Dikson show similar results to Barrow, with uninterrupted persistent warmth in recent Octobers and a dramatic reduction in variance compared to the earlier climate; however, the extreme warmth seems to have started a bit later than in Barrow, with some cooler years persisting until 2006.  The Russian stations also show more pronounced warmth than Barrow in the early years; the lack of cold at Dikson in the 1940s almost rivals the modern warm pattern.  Both Russian stations had their warmest October of record in 1947. 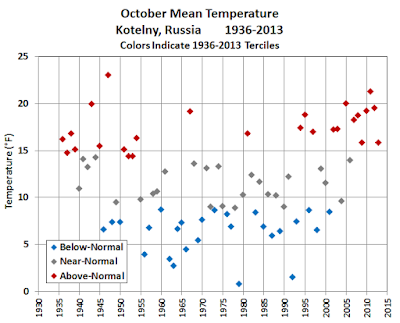 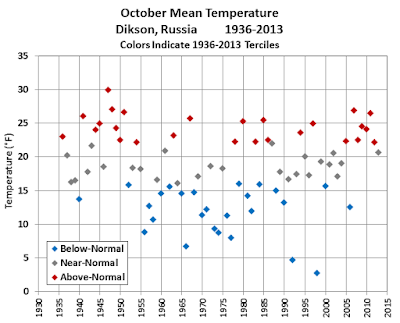 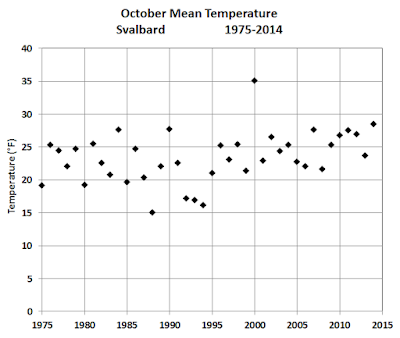 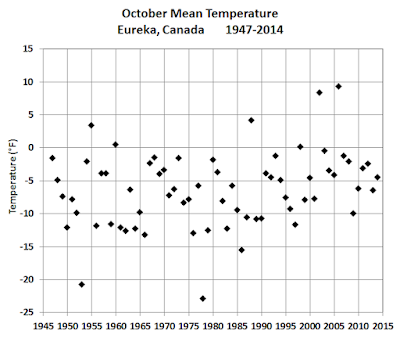 Svalbard and Eureka both show an absence of unusually cold Octobers in recent years, although almost a decade has passed since the warmest October of record at Eureka; no recent October has come close to the (relative!) warmth of 2002 and 2006.

A comparison of 10-year trailing mean October temperatures (see below) shows strong similarities between the trends in recent years, confirming that the autumn warming is an Arctic-wide phenomenon; it's particularly notable that the rate of warming has been similar since 2000 at Dikson, Kotelny, and Barrow.  However, temperatures at Svalbard and Eureka have not increased on average for some years now; these differences may be attributable to decadal shifts in the October circulation patterns across the Arctic. 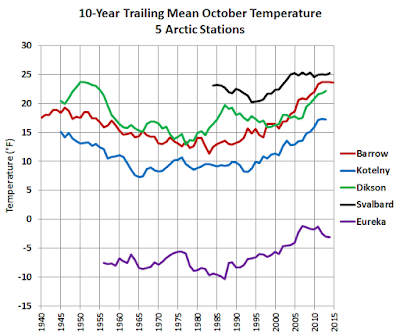 The data from Barrow and the Russian stations clearly show the multi-decadal variability that characterizes Arctic climate, as the earliest years (prior to 1955) were relatively warm compared to the middle part of the historical record.  In my view the multi-decadal variations are probably influenced by the Atlantic Multidecadal Oscillation, and so it seems likely that the next downturn in the AMO (which is still significantly positive) will also affect the Arctic temperatures.  However, it remains to be seen how significant this temporary cooling influence will be compared to the overall long-term warming trend.