The first temperatures below -30°F were observed last night in two different parts of Alaska: on the central North Slope, where -35°F was observed in at least a couple of spots (Prince Creek near Umiat and Otuk Creek near Ivotuk), and in the Fortymile Country, where Chicken also reached -35°F.  It's only about a week early for Chicken to reach such a temperature; it happened in October in 2008.

Clouds have kept the central interior warmer in the past couple of days, but continued cooling aloft will allow for plummeting temperatures at some point in the next few days.  A time-height cross-section of temperature from this morning's GFS forecast shows almost the entire column below -24°C (-11°F) by Wednesday.  An airmass this cold (completely below -23°C) is fairly unusual this early in the season, having been observed only 8 times in 65 years prior to November 20 (but 3 times since 2003). 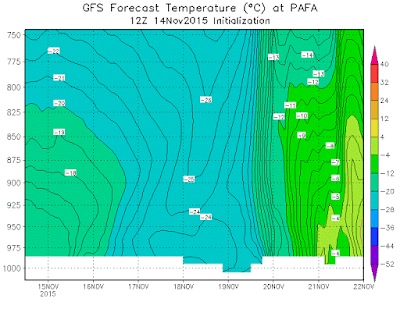 What does it mean at the surface?  One answer is to look at the GFS MOS forecast, which shows -41°F in North Pole and -38°F at the Ester 5NE COOP on Tuesday.  This is an objective statistical forecast based on multiple regression with the model variables; in theory it's an unbiased estimate.

Judging from webcam images today, it appeared that the Yukon River was still moving at Dawson - albeit choked with ice - and the Tanana River was still flowing at Nenana.  Here's a video of steam fog over the Tanana River on Thursday morning, when the low temperature was -12°F.  (The resolution's not too good, I know - a couple of static shots are below.) 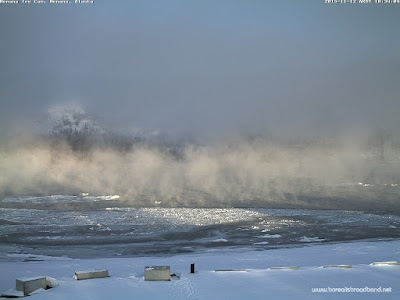 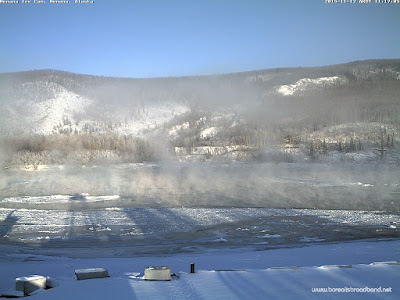