What's the Snowiest Place in the Interior?

November has been a very snowy month so far in Fairbanks, with 21.4" through midnight last night and measurable snowfall on 19 of 25 days including today.  Compared to the 1930-present history, these numbers are the 9th and 3rd highest respectively for the full month of November, with several days still to be counted before the month ends.

In terms of year-to-date snowfall, Fairbanks is at 46.1", which already exceeds last winter's total snowfall of 43.8".  It's only the 5th time that 46" has been reached by this date.  The earliest this snow accumulation was reached was 1992 (November 12), following the record September snows.  Approximately one quarter of winters in Fairbanks don't reach 46" of snow in the entire winter.

All this snow led me to wonder what the snowiest location is in interior Alaska.  Some time ago Rick Thoman indicated on this blog that Kaltag has a normal annual snowfall of around 120", and after looking at the NCDC normals and GHCN data, I'm unable to find any location that exceeds this (excluding sites at elevation in the Alaska Range).  In the official 1981-2010 normals, which are rather sparse because of the stringent requirements for data completeness, the highest mean annual snowfall in the interior is a (to me) surprisingly high 97" in McGrath, with Bettles (91") coming in second.  Fairbanks comes in at 65" (mean, not median).

Looking at all GHCN data for Alaska, the highest mean annual snowfall for a valley-level interior station with at least 10 years of at least some data is at Ambler, with 113" on average from 1981-82 to 1991-92.  This includes a remarkably high 197" in the winter of 1988-89, of which 66" purportedly fell in April 1989.  At first glance this is implausible, but the daily observations do not look at all unreasonable, and there is no doubt it was a snowy month in the region; Kotzebue reported one of their snowiest Aprils on record.  The NCEP reanalysis, which provides an independent estimate of conditions (i.e. it is not influenced by surface station reports), indicates an unusually wet month across northwestern Alaska (see below). 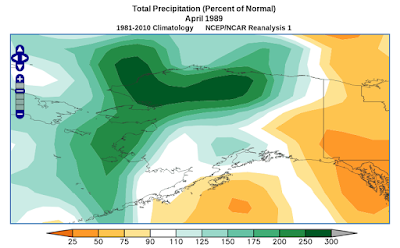 Next in line after Ambler for mean annual snowfall are Coldfoot and Indian Mountain, both of which average 99" of snow according to my calculations; both locations are slightly above 1000' elevation.  Indian Mountain was the site of the largest annual snowfall on record in the interior, at 217" in 1966-67.  Interestingly this again included a very large 48" in April, and the reanalysis estimate of precipitation backs this up, with a swath of more than 4" liquid equivalent extending east of the Seward Peninsula to the vicinity of Indian Mountain. 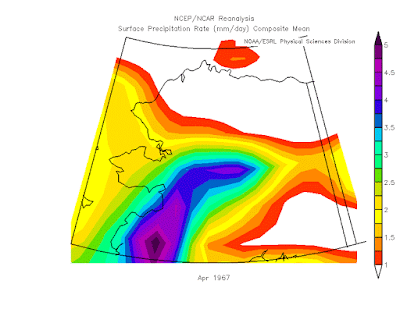 Given these results, it seems likely that the snowiest region in the interior is the zone from Kaltag north to the Kobuk valley and northeast to the Koyukuk River area.  Within this broad area, the paucity of data makes it difficult to say anything with confidence, so I'd be glad to hear of any anecdotal evidence or additional data that might clarify the issue.