With the advent of significantly below-normal temperatures in the interior (-26°F at the Salcha RAWS this morning), and a forecast for still colder weather, the question arises as to whether this is unusual during a strong El Niño episode.  As I'm sure most readers are aware, one of the strongest El Niño events on record is nearing peak intensity in the equatorial Pacific Ocean, and as we saw here El Niño often coincides with warmth in the eastern interior, especially when the PDO phase is positive (as it is now).  But what about the very strongest El Niño events?  Do they fit the typical pattern?

The charts below show the daily temperature anomalies from October through March for the top 3 El Niño winters on record, based on October-December mean SST in the Niño3.4 region.  These El Niño events were considerably ahead of any other years based on this metric. 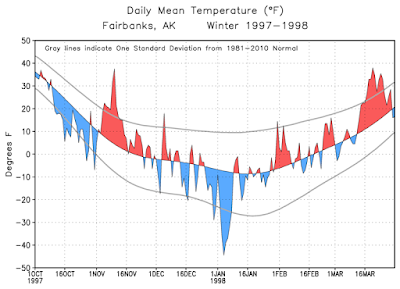 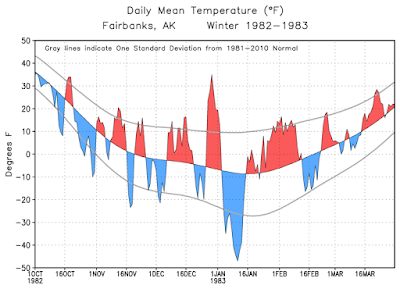 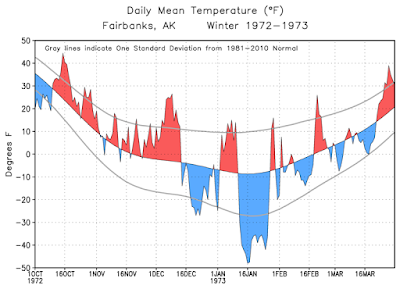 Interestingly we see that each winter had a very significant cold spell in January, and 1982-83 had several cold spells earlier in the winter.  1997-1998 was characterized by unusually low variance, with temperatures often not far from normal, but the other winters were more variable.  None of the winters was overwhelmingly warm, and it's clear that unusual winter cold is entirely possible in Fairbanks during strong El Niño events.  Note that the PDO was positive in 1997-98, increasingly positive in late winter of 1982-83, and slightly negative in 1972-73.

As for precipitation, 1982-83 was very wet during October and November, but the other two strong El Niño winters had near-normal precipitation in early winter.  Both 1997-98 and 1982-83 turned dry in the new year as the North Pacific Mode became negative (more so in 1998). 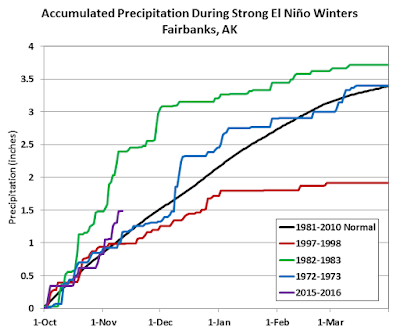