As befits the time of year, sharply colder temperatures have occurred throughout the eastern interior in the past couple of days.  Here are some of the colder observations I've noted:

North Slope locations were even a little colder, with Deadhorse dropping below the -30°C mark (-22°F); the CRN site just south of Deadhorse made it to -26°F, which appears to be the lowest temperature observed in the state so far this season.

Fairbanks managed to drop to -1°F late on Saturday evening, which was not only the first sub-zero reading but the first temperature below 19°F.  After being unusually warm for most of the month, October ended up with a sub-zero temperature after all.  It was the 8th warmest October since 1930, but was much less warm than 2013 (mean temperature 31.8°F vs 36.1°F).  Snowfall in the last 3 days of the month produced an October total of 3.8", which is the 9th lowest since 1930.

The persistent warmth of October gave the perception of a much-lengthened autumn and delayed onset of winter in Fairbanks, but certain other parts of the interior experienced a more wintry scene throughout most of October.  For example, in Circle Hot Springs (elevation 860') the late September snow never melted off, and temperatures remained almost continuously below freezing after the 8th of the month.  The chart below shows the contrasting conditions between these two locations that are separated by only about 100 miles and 400' elevation. 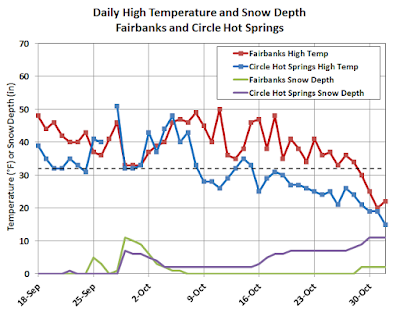 On another note, webcam photos reveal that the Chena River froze up in the past 24 hours in Fairbanks, but the Tanana is still open at Nenana. 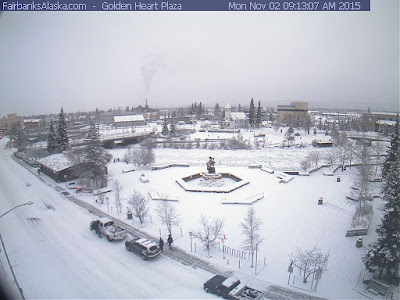 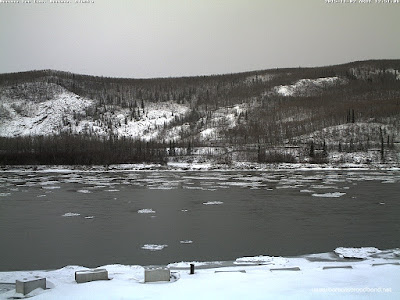