The medium-range forecast is starting to look pretty chilly for interior Alaska, suggesting that true winter conditions may not be far off.  Here are the latest 6-10 day and 8-14 day temperature forecasts from NOAA's CPC, showing about a 60% chance of lower-tercile (significantly below-normal) temperatures in both periods.

Today's computer model runs show the circulation feature that is expected to be responsible for the cold: a big trough over northwestern North America.  The deterministic GFS forecast shows some impressive cold, with 850mb temperatures dropping below -30°C over the far eastern interior by November 15.  The last time 850mb temperatures dropped below -25°C in Fairbanks before mid-month was in 2006 (-26.5°C on the 13th).  But that is one of the more extreme scenarios that might happen, and probably not the most likely.

Here's a nice webcam photo from Dawson, YT, today.  Ice is still moving on the mighty Yukon River, but freeze-up appears to be imminent.  The temperature was +5°F at Dawson airport this morning, but reached -9°F on Sunday. 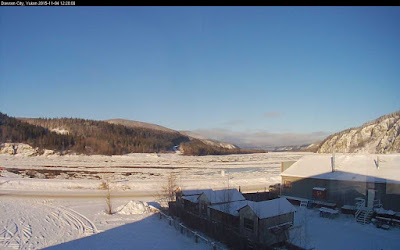