Fairbanks has been enjoying a spell of delightful late summer weather recently, which I'm sure is most welcome after the very wet weather of June and July.  The past week included the longest dry spell since mid-May, and 14 of the past 15 days (including today) have reached 70°F; but it hasn't been excessively warm, as the temperature hasn't reached 80°F since the mid-July heat wave. 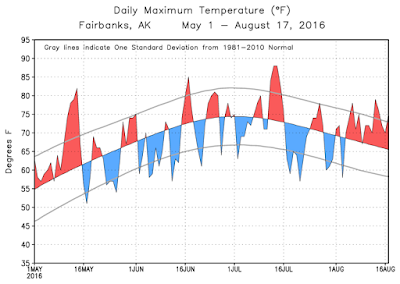 It's interesting to note that the average daily high temperature so far this month is 71.9°F, which is higher than last month's average: so far, August days have been warmer than July days, which is unusual.  If the anomaly continues and August ends warmer than July for high temperatures, it will be only the 4th time this has happened in Fairbanks history (1930-present) - and the previous occasions all followed very cool July's, unlike this year.  But note that August has never been warmer than July in terms of overall average (daily mean) temperature, and it's very unlikely to happen this year.

The warmth in Fairbanks this month is consistent with, and merely a small part of, the ongoing exceptional warm anomaly that has affected the state of Alaska all year.  The chart below shows the daily average of temperature anomalies during the last year for 25 stations scattered around the state, from Annette Island to St Paul Island and across the interior up to the Arctic coast (credit to Rick Thoman for devising this kind of analysis).  According to my calculations, the statewide index has been below normal only 2 days so far this year, and that by only the smallest of margins; the persistence of the warm anomaly is quite astonishing. 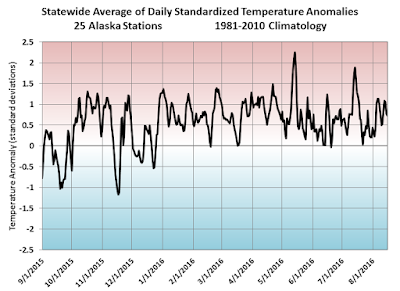