Wet in the Northwest

Parts of northwestern Alaska have seen very heavy rainfall in the past week or so, as very moist southwesterly flow has been drawn up into the western Brooks range.  The highest rain totals were observed at the high-quality CRN site near the Red Dog mine, about 30 miles north of Noatak and 45 miles northeast of Kivalina.  The CRN instruments sit at an elevation of 942 feet above sea level with higher terrain to the north and northeast, so flow from the south or southwest is favorable for heavy precipitation.  The station reported 4.97" in 3 days ending on the 20th, with 2.89" on the 19th alone.

Heavy rainfall continued in the subsequent days at points farther to the east in the western Brooks Range; the following images show the NWS estimates of precipitation over several consecutive days (with one image missing for the 23rd - sorry):

It's no surprise to see the NWS issue an advisory today for high water levels on rivers in the area.  As noted by the NWS, the flow of the Kobuk River near Kiana has more than quadrupled in the past week: 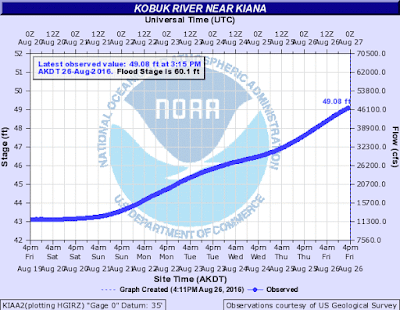 Here are a couple of soundings from Kotzebue that show the strong southwesterly low-level flow around the time of the very heavy rainfall at Red Dog.  The sounding at 4pm AKDT last Friday reported 45 knot winds from the southwest at 3000 feet above sea level, transporting copious moisture into the hills to the north.

As remarkable as 5" of rain in 3 days seems at a latitude of 68°N, it's apparently not that unusual for the Red Dog CRN site, which has been in operation for exactly 6 years today.  The chart below shows the monthly precipitation totals (liquid equivalent), and we see that not only was last August also very wet, but August 2012 produced an extremely large amount of rain at the site.  Given that August 2012 was also by far the wettest month on record at nearby Kivalina, with a remarkable 8.8" of rain, the extreme Red Dog total is plausible. 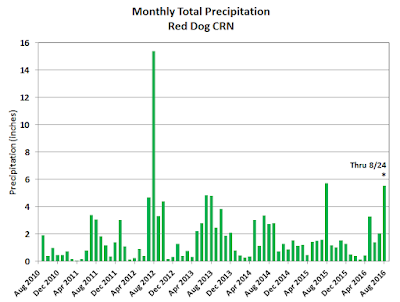 It is no coincidence that August 2012 also produced the strong Arctic cyclone that we discussed in connection with the recent Arctic storm; the circulation pattern this month, with low pressure to the north and northwest of Alaska, is broadly similar, although this year the main anomaly is farther to the north and away from Alaska.  Here's a map of the sea-level pressure anomaly in August 2012. 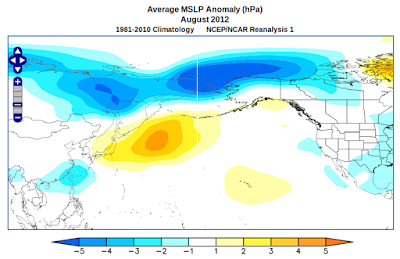 It is interesting, to say the least, that August has been so consistently wet at Red Dog in the past 5 years.  The figure below shows the distribution of precipitation totals for each month of the year, with the columns showing the absolute range and the horizontal markers indicating the median for each month.  It's intriguing to consider whether August has always been by far the wettest month of the year in this area, or if the past several years have been very anomalous compared to the longer-term climate.  I suspect the latter is more likely to be true. 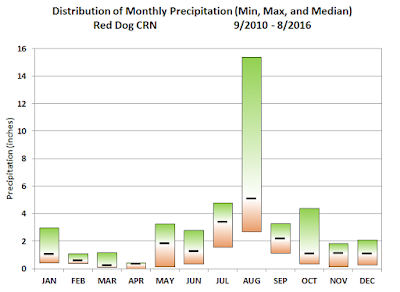 Finally, for context and future reference, here's the setting of the Red Dog site as visualized on Google Maps and from the FAA webcam view.  The CRN site appears to be just visible on the webcam view, just to the right of the road as it heads away from the airport to the southwest. 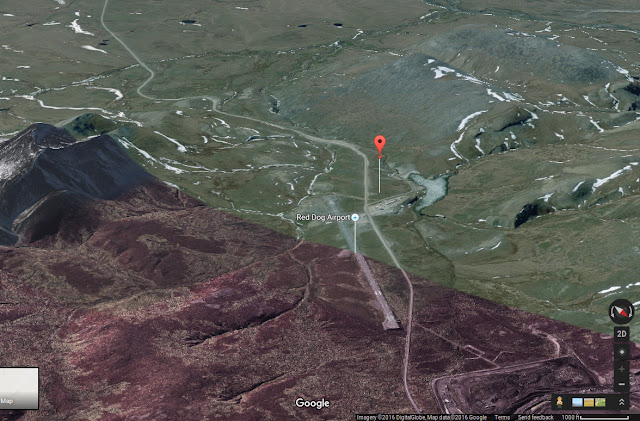 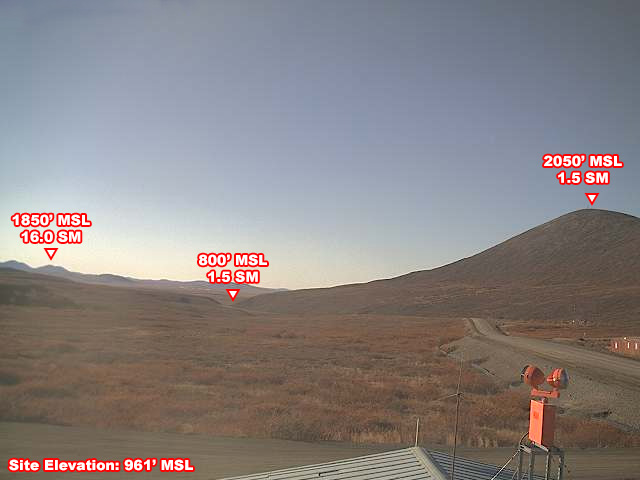