Reader Tracy recently asked about conditions around the Colville River delta of the North Slope this summer in light of very dry ground conditions that she observed there during July.  How is this best explained - dry weather, warm weather, lack of winter snowfall, or something else?

Looking at temperatures, the June-July period was slightly but not dramatically warmer than normal, except for the heat wave in mid-July.  Overall Colville Village was 1.5°F above normal for the two months, and Kuparuk was 1.3°F above normal; three of the last four years were warmer than 2016 over this period at Colville Village.  However, if we look back to May we find very unusual warmth, which contributed to a very early melt-off of the winter snow cover.  Colville Village reported zero snow depth (i.e. no snow over more than 50% of the ground area) on May 14, the earliest date on record (data from 1997-present).  Kuparuk reported melt-off on May 12, also very much earlier than normal (but not a record).  For the rest of May after melt-off, temperatures were persistently above normal in both locations. 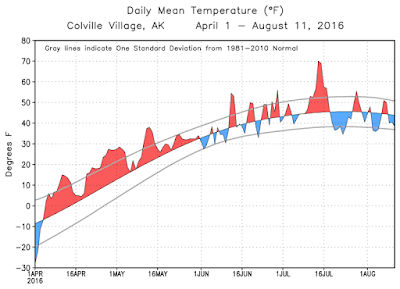 The chart below shows that melt-off typically occurred in early June prior to last year at Colville Village (at least since 1997), so this year's early melt added 2-3 weeks of warming and drying of the ground surface in early summer. 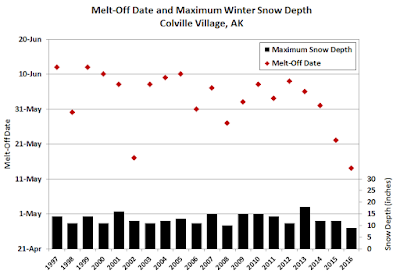 At first blush the early melt-off seems to be significant relative to a short summer season: by July 15 this year the area had been snow-free for 9 weeks, compared to around 6 weeks in a normal year.  With evaporation taking place for 50% longer, and with the potential for 24-hour sunshine at this time of year, ground moisture levels might be expected to take a hit relative to normal.  However, temperatures were still low in absolute terms in the second half of May, and it is a cloudy time of year, so total evaporation may have been only slightly enhanced compared to a normal summer.

I was hoping to dig into the detailed evaporation calculation using data from Barrow's CRN site, but unfortunately the NCEI website is not working at present.  In lieu of a full calculation for Barrow, I computed the daily average vapor pressure deficit from Nuiqsut airport, which in any case is much closer to the Colville delta.  The chart below shows the sum of daily average vapor pressure deficit values from the date of melt-off to July 31 in each year since 1999.  Recall that the vapor pressure deficit is directly proportional to the evaporation rate, all else being equal (e.g. wind and solar radiation).  The results indicate that evaporation this year was probably higher than the long-term average but may have been no higher than 2015, and was perhaps lower than 2015.  It's clear that the evaporation is more closely tied to summer temperatures and humidity (and no doubt cloudiness and wind) than to melt-off date, because it's just too cool in May to accomplish much evaporation regardless of whether the ground is snow covered or not. 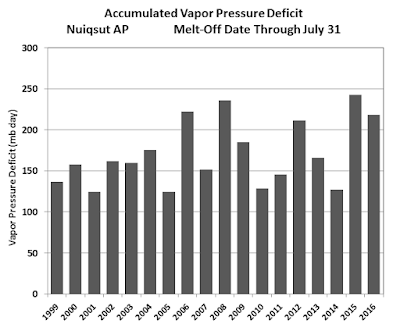 Looking again at the melt-off chart, another point of interest is that the peak snow depth in winter 2015-2016 was only 9" at Colville Village, which is the lowest in the 20-year history.  It's not a large difference in terms of absolute water content of the snowpack, but the small snow deficit may have contributed to reduced ground moisture levels this summer.  In conclusion, I'd say the dry ground conditions observed by Tracy were caused by a combination of factors, including at least: a slight lack of snowpack last winter, an early melt-off allowing for early warming and drying of the ground, and slightly unusual warmth (and one heat wave) this summer.  It would be interesting to hear others' perspectives; and the faithful climate observers at Colville Village would probably have some useful insight as well.

Here is a parallel melt-off chart for Kuparuk with its longer observing history.  Last winter's snow depth was low there too compared to recent years, although there is a pronounced long-term trend towards rising winter snow depth; this may or may not be real, as it could be related to changing measurement practices or variations in measurement location. 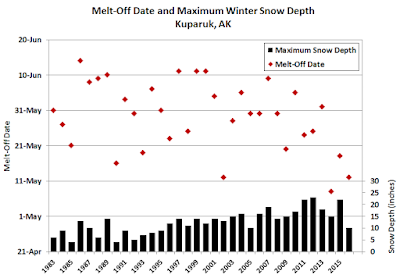 Posted by Richard James at 5:11 PM