Here's a quick look at the climate anomalies for July across the state.  Nearly all of the long-term observing sites were warmer than normal, and southern areas were far above normal; Anchorage observed their warmest calendar month on record.  Very wet conditions were widespread from Nome to Fairbanks and south to King Salmon and Anchorage. 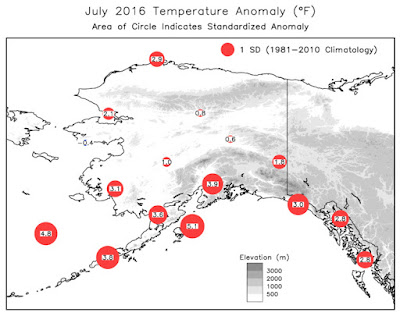 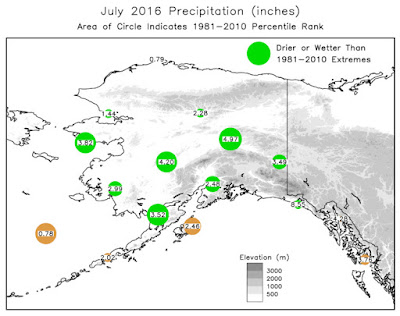 Here's a nice summary graphic from the NWS (see here for accompanying discussion): 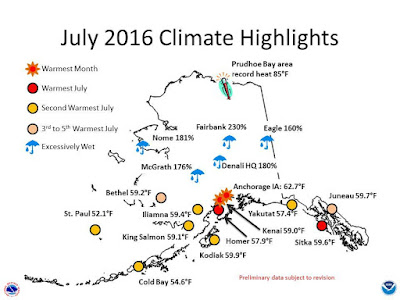 Looking more closely at rainfall in the Fairbanks area, the NWS has this to say:

"July 2016 was a wet month with an incredible 4.97 inches of rain falling at the Fairbanks Airport during the month. This ranked as the 4th wettest of 104 years of record. The July rainfall when combined with the rainfall from June which also happened to be the 4th wettest on record totals 8.26 inches which is the second wettest June to July period on record. The wettest June to July period was the summer of 2014 which accumulated 9.34 inches of rainfall during the same time period. The excessive rainfall over Fairbanks and the surrounding area continues to impact local residents with swift and high flowing rivers and minor flooding of low lying areas. Ground water flooding and ponding of water continues in many areas as we start the month of August. The Moose Creek Dam near North Pole was put into operation again in July. Very heavy rain which totaled 1.98 inches at the airport and 3 to 4 inches in the higher terrain north and east of Fairbanks during the last 4 days of the month pushed many streams and rivers into minor flood stage. Without adding any rainfall for the month of August the summer of 2016 which includes the months of June July and August already ranks as the 10 wettest on record."

Here are some July rainfall totals from the Fairbanks area, compiled by Rick Thoman in characteristically thorough fashion:

It's interesting to note that NOAA's CFSv2 forecast model was successful in anticipating the wet July weather from far in advance; way back in April I discussed the wet CFSv2 forecast for midsummer.  Other seasonal forecast models were on the same page, as shown by April's edition of the North American Multi-Model Ensemble (NMME) forecast for July:

Looking farther afield at July temperatures across the Arctic basin, extraordinary warmth was observed in high Arctic Canada and northwestern Russia; the map below shows the July mean temperature anomaly in terms of standard deviations.  Three stations (Eureka and Alert, Canada, and Marre-Sale, Russia) saw July temperatures more than 4 SD above normal, and Eureka was the winner at an amazing 5.3 SD above normal.  July was by far the warmest month on record at Eureka, with a mean temperature of 12.0°C; the previous record was 9.6°C, observed just last year in July.  Prior to 2003, no calendar month had ever exceeded 7.5°C in Eureka (data back to 1947). 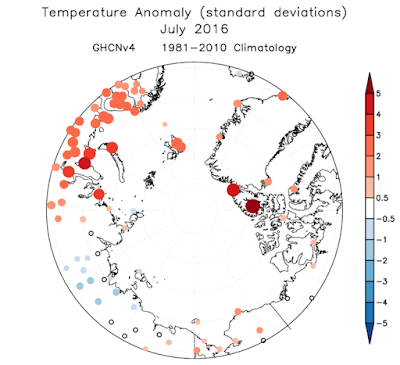