In view of the extraordinary rainfall in the Fairbanks area this summer, I thought it would be interesting to look at radar data to get a better idea of the spatial distribution of the rainfall amounts in June and July.  Using a standard relationship between radar reflectivity and rain rate, I calculated daily rainfall estimates based on data from the Pedro Dome radar site just north of Fairbanks; the figure below shows the June-July estimated totals (click to enlarge).  Observed amounts at surface measuring sites are marked in black. 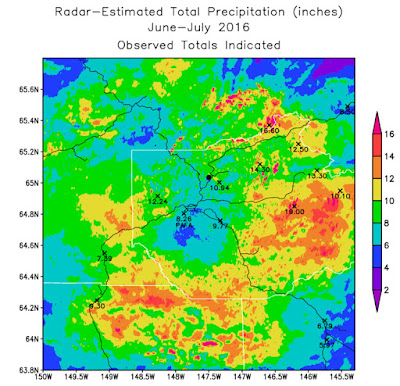 Here's a comparison of estimated and observed total precipitation by location:

On average for the 15 stations, the radar algorithm underestimated the total precipitation by 11%, which is not too bad.  In a few spots the radar estimates were excellent, and in a few spots they were notably bad; for example, Keystone Ridge apparently observed 52% more rainfall than the radar indicated.  Localized differences like this might be related to local topographic enhancement or diminution of rainfall compared to what is estimated from radar reflectivity at the height of the radar beam (which increases with distance from the radar site).  It's also possible that the surface measurements are incorrect at some of the observing sites.  The charts below show comparisons of the daily rainfall amounts at Fairbanks airport and Munson Ridge SNOTEL; both of these sites report precipitation for the midnight-to-midnight period, which matches the period that I used for the radar calculations. 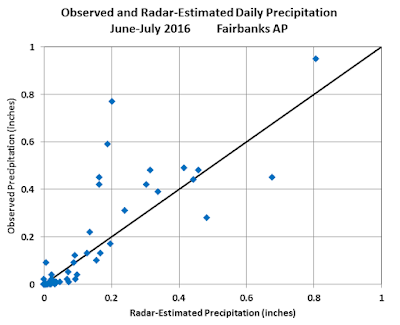 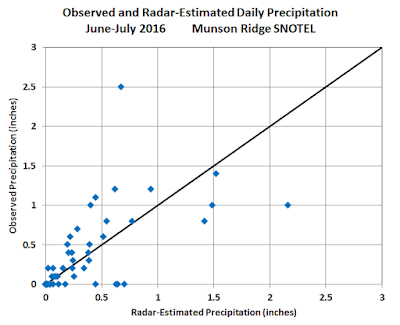 Regardless of local discrepancies and potential errors, the main point of the exercise is to get a rough look at the spatial distribution of rainfall during June and July, and the radar estimate serves this purpose quite well.  Based on the SNOTEL data, we already knew there was a broad area of enhanced rainfall in the hills east and northeast of Fairbanks, but the increased rainfall between Fairbanks and Nenana is interesting.  The radar estimate suggests that it was also very wet on the south side of the Tanana valley but north of the higher terrain of the Alaska Range.