The exceptionally persistent and unusual warmth across Alaska in recent months and years (since mid-2013) has been well-publicized on many fronts, and deservedly so.  Here's another angle on the amazing warmth that I haven't seen discussed elsewhere (although perhaps I missed it): it is now very likely that Alaska's statewide 12-month running average temperature will rise above freezing for the first time on record within the next 2 months.  This is according to NOAA's climate division data for Alaska.

The charts below illustrate the likely range of 12-month running mean temperatures through the end of this year by appending the 1981-2015 distribution of multi-month means to the preceding averages.  Note that anything except continued very unusual warmth will bring the 12-month running average back down below freezing by early winter; it's rather unlikely that the annual mean temperatures will remain above freezing for more than a month or two.  After all, the 1981-2010 normal is 27.2°F, and presumably more normal temperatures will return, at least for a spell, sooner or later. 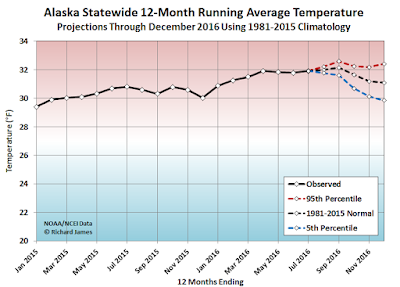 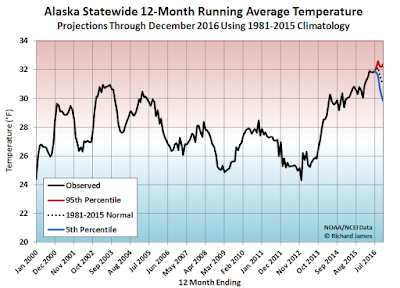