None of the usually colder reporting sites around the Fairbanks area has seen a freeze yet this month, and this is unusual compared to recent years.  The normally chilly Goldstream Creek and Ester 5NE (Goldstream Valley Bottom) COOP sites came close a few days ago, with both sites reaching 33°F, but the closest site to Fairbanks to hit 32°F so far is a COOP site 20 miles southeast of Delta Junction.

Looking back at the past 10 years, here are the coldest temperatures reported by August 22 in the general vicinity of Fairbanks:

The last time the first freeze report came in later than August 22 was in 2004, when it occurred on the 25th.  That year also saw Fairbanks airport stay at or above 45°F until the 28th, the latest on record; but if current forecasts are to be believed, that record may be in danger this year.

The chart below shows daily low temperatures at Ester 5NE this summer.  In the 18 years that this COOP site has been operational, freezes have been recorded even in the height of summer - for example:

Consider this as a metric of how persistently mild it's been this summer: the low temperature at Ester 5NE stayed at or above 40°F for 54 consecutive days this summer; this is more than double the previous record of 25 days, set in 2005. 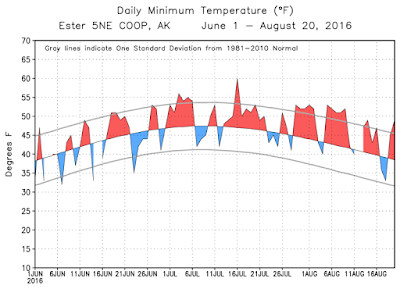