After nearly two weeks of significantly colder than normal temperatures in Fairbanks, clouds finally rolled in this morning and produced warming at the surface.  The temperature rose from -21°F at midnight to +9°F at 3pm as infrared radiation from the clouds above warmed the air at the surface and thereby weakened the surface-based inversion.

The chart below (click to enlarge) shows the hourly temperature data from the airport in the past 19 days, along with the 850mb and 925mb temperatures as well as the sea-level pressure (MSLP).  The strong inversion began on the 3rd when the pressure rose up through 1030mb, and the inversion weakened today as the pressure dropped back below 1030mb.  Of course the pressure itself is not directly responsible for the temperature changes, but it's correlated with the cloud cover: high pressure conditions tend to be clear and calm, allowing for large net radiation losses from the surface. 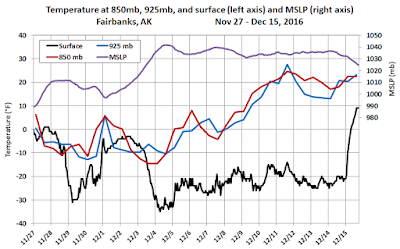 With the temperature staying below 0°F for 17 consecutive days and below -13°F (-25°C) for 11 days, this cold spell marks quite a change from recent warm winters; the last comparable cold period was in early December 2012.

It's interesting to note that the PDO phase is still moderately positive; its influence has certainly not been felt lately over interior Alaska. 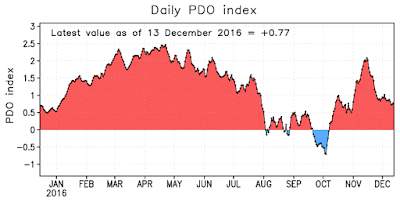 Here's a chart of recent daily high temperatures, which have been more unusually cold than daily low temperatures.  Prior to today, 27 consecutive days had a high temperature below normal; that's the most since the very cold spring of 2013.  It will be interesting to see if the exceptional and persistent warmth that began so dramatically in May 2013 has ended for now, or if warmth will soon return. 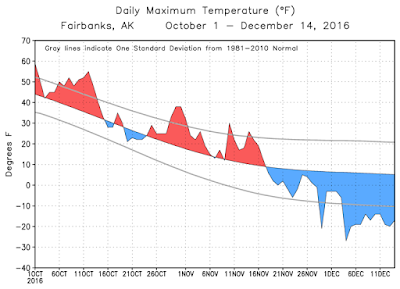 Posted by Richard James at 7:04 PM