January has been another relatively snowy month in Fairbanks, with a total accumulation of 17" - the highest January total since 2005.  The combined December-January total was almost exactly 50", which is the 5th highest on record for the two-month period.  Temperatures have averaged slightly below the 1981-2010 normal and close to the long-term (1930-present) normal, but with alternating cold and warm spells.  Snowy winters are typically colder than dry winters in Fairbanks. 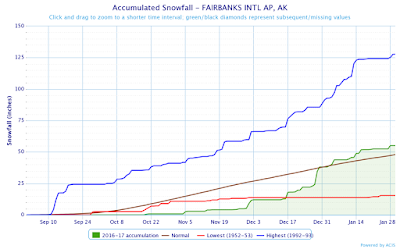 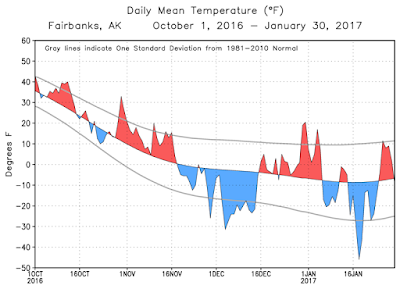 As noted in earlier posts (e.g. here), the cool and snowy conditions are surprising in view of this winter's North Pacific sea surface temperature patterns.  The positive PDO phase and negative NPM phase, which continue to be evident in the latest SST data, would normally promote warm and dry conditions in the interior; we discussed this back in November.  Here's another map showing the average 500mb height anomaly (departure from normal) in November through January for 6 winters with a significantly positive PDO and significantly negative NPM: 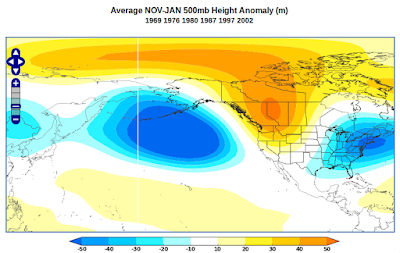 Compare this pattern to what has actually transpired in the last 3 months:

The patterns are fairly close to the inverse of each other, and this of course explains the weather in Fairbanks: the flow pattern has produced enhanced westerly flow across western Alaska, thereby transporting moisture to the interior, and the tendency for higher heights in the Bering Sea has allowed cold air to drop south across Alaska at times.

The reason for the discrepancy appears to be that the weak La Niña in the tropical Pacific has had a much more dominant influence on the circulation pattern than expected (at least by me).  The map below shows the height pattern for the 10 strongest La Niña winters since 1950-51; this is a better match to what has happened this winter, although admittedly the La Niña flow is a colder pattern for Alaska than we've seen this winter. 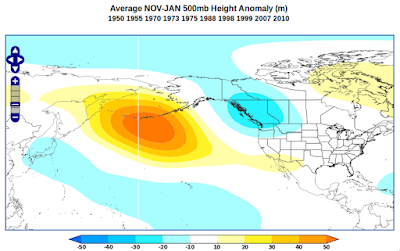 The most intriguing part of the situation, I think, is how the North Pacific SST patterns have remained much more reminiscent of El Niño than of La Niña, despite the evidently profound influence of the La Niña episode on the atmospheric circulation.  A positive PDO and negative NPM are generally observed in association with El Niño, like last winter - but not this time.  But regardless of the cause, this winter's outcome will serve as a cautionary tale about the danger of relying too heavily on the North Pacific SST patterns in isolation for making a forecast.

Update Feb 2: This nice graphic from NWS Fairbanks shows the complete contrast between last winter and this winter in terms of early versus mid-winter snowfall accumulation; the totals before and after December 1 are almost perfectly reversed. 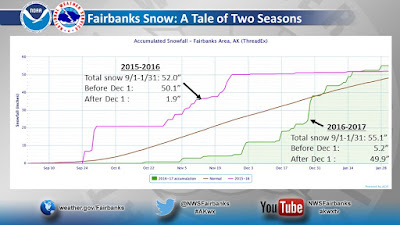