A noteworthy aspect of the recent cold snap - as highlighted in previous posts (e.g. here) - is that Fairbanks saw its coldest air mass on record for April, with the 850mb temperature dropping well below -30°C in the heart of the event.  Last week I noted that 3 daily low temperature records were broken at 850mb, which equals the number of daily cold records in the preceding 7 years.

Remarkably, however, the extreme warm-up that followed has now broken 2 daily high temperature records at 850mb in Fairbanks, on April 19 and 20; so the chart I produced last week is already out of date.  Here's the updated version, showing numbers of daily 850mb records by year. 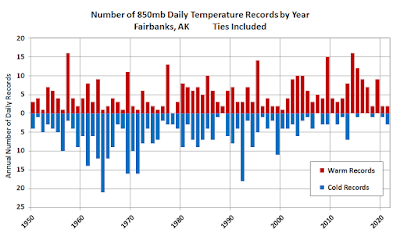 I promised to follow up with a look at the seasonal breakdown of records, so here are the results for each of the standard climatological seasons: 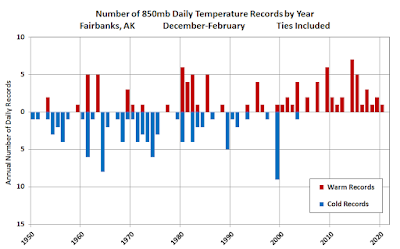 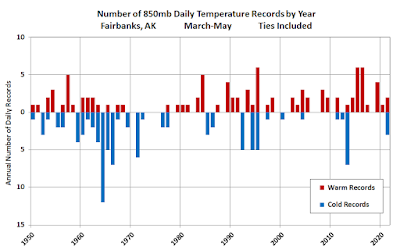 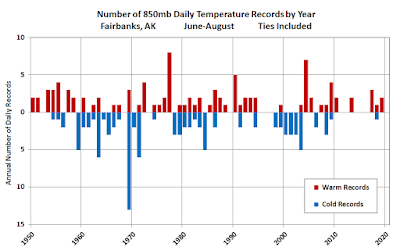 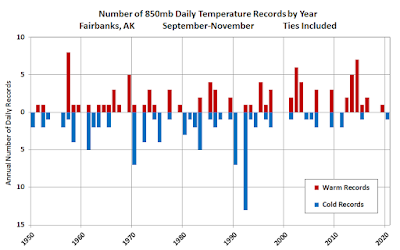 There are a few interesting aspects here.  First, I think it's very intriguing how the cold records are more strongly clustered in a few highly unusual years: in particular, 1999 (early February) for winter, 1964 (March and May) for spring, 1969 (late July into August) for summer, and 1992 (September) for autumn.  In contrast, the most anomalous warm events have produced fewer warm records; and so it seems that the most extreme cold episodes have a staying power that warm episodes don't.

Second, the complete absence of any cold records in winter in the last 15 years is amazing - although there have been a few in November.  Of the four seasons, winter has the strongest trends for both warm and cold records.

Third, the lack of increasing warm records in summer is rather striking; the trend is actually marginally down.  However, cold records have also disappeared in summer, so 850mb temperatures have simply been rather bland in comparison to earlier decades.

On an annual basis, the relatively small increase in warm records is also quite interesting, as I noted in the earlier post.  The same is not true on a hemispheric basis, at least if ERA5 reanalysis data is to be believed - see below.  This chart shows an area-average (land+ocean) of annual counts of daily records, again at 850mb; the trend is much more striking than at Fairbanks, and it's also much more symmetric between warm and cold.  It would be worth a bit more investigation to see how consistent the reanalysis trends are with the radiosonde data for Alaska; there are known biases with historical radiosonde data, but mainly in the stratosphere and at tropical latitudes. 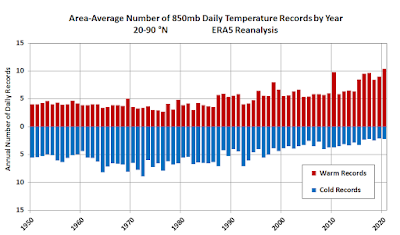 Posted by Richard James at 1:01 PM