Another day, another update on the remarkable cold snap that is now gripping much of Alaska.  First, to follow up on yesterday: Kotzebue reached -9°F, so not quite the coldest day this late in the season; but the high temperature in Bettles was confirmed at -2°F, the latest sub-zero day in the history there (1944-present).  And today is even colder: so far no higher than -4°F.  [Update: the high was -3°F.  Back-to-back sub-zero days have never been observed in April in Bettles before.]

As for an overnight low, Bettles dropped down to at least -38°F this morning, but the final number won't be known until midnight tonight, because the ASOS inexplicably failed to report the 6-hour minimum at 18 UTC.  They may have nicked -40°.  [Update: -39°F]

Broadly speaking, temperatures weren't as low as expected last night, as some wind and/or cloud, combined with the short night, prevented most thermometers from really bottoming out.  -30s were observed quite widely on the North Slope, but south of the Brooks Range relatively few spots dropped below -30°F; Bettles was one of the coldest.  Click to enlarge the following: 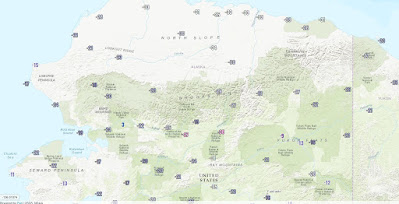 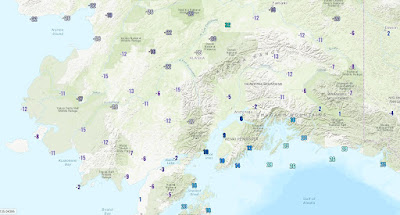 The lowest temperatures in this event so far - courtesy of Rick Thoman - appear to be the following:

As for upper-air temperatures, Fairbanks sent up a special 18 UTC sounding (thanks, NWS!) to sample the cold air mass at approximately its nadir.  The results were spectacular: the instrument reported easily the coldest air on record for April, with data back to 1948:

Here it is, in all its glory: 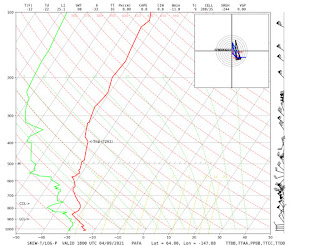 In the chart below I've plotted all Fairbanks 850mb temperature measurements from the entire history, and the red marker shows this morning's temperature.  The only comparable cold outliers in spring - in terms of departure from normal - were those of April 18, 1959, March 27-28, 1963, and of course the granddaddy of them all, May 9, 1964 (when the surface temperature reached -1°F in Fairbanks on May 9).  1964 was the year of record latest breakup at Nenana until the record was broken (by just 3 hours) in 2013. 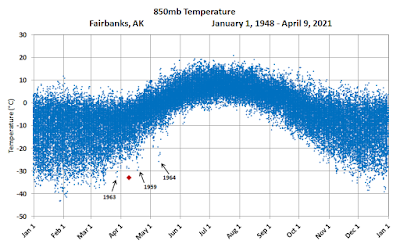