Even Colder On The Way

In the wake of the big snow, clearing skies and much reduced winds allowed temperatures to plummet in Fairbanks last night, as well as more widely across the interior (click to enlarge the map below).  This morning's low temperature of -24°F in Fairbanks is very nearly the lowest on record for so late in the season; only April 7, 1986 (-24°F) and April 10-11, 1911 (-32°F) saw this degree of cold at a later date. 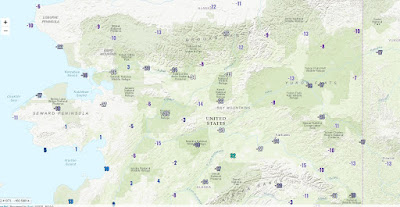 The Fairbanks balloon sounding measured a temperature of -25°C at 850mb yesterday afternoon, which is the coldest in April since 1992.  But as hard as it may be to believe, an even colder air mass is on the way by Friday.  How much colder?  The chart below shows the 850mb temperature forecast from the GEFS ensemble: there's a strong probability of the 850mb temperature dropping below -30°C. 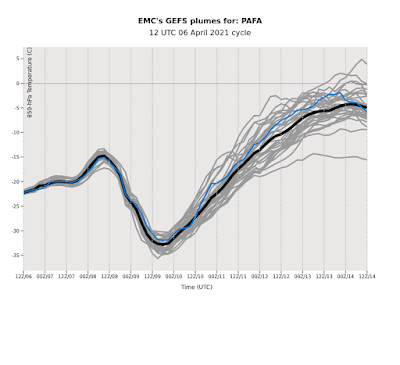 Fairbanks has never measured an 850mb temperature of -30°C in April, with data since 1948; the lowest was -29.6°C on April 18, 1959.  Perhaps surprisingly, the surface temperature never dropped below -8°F in that event, apparently because the wind didn't die down.

So buckle up, hardy residents of Fairbanks: it's looking quite likely that the Golden Heart City will see its lowest April temperatures in recorded history (the monthly record is -33°F).  The state record for April is -50°F, and incredibly that is very much in play as well.