Following up on the dramatic events of last week... First, Rick Thoman put together a nice summary graphic of the lowest temperatures reported at many locations around the state - see below (click to enlarge).  That's some deep cold for the second week in April (but interesting that Chicken didn't get colder). 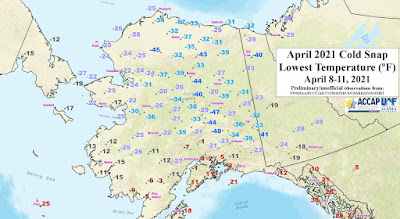 Second, I looked back at the Fairbanks history of 850mb temperature measurements to see how rare it's becoming to set or tie daily cold records.  Last week, three daily records were broken for 850mb temperature: April 6, 9, and 10, the latter two by a large margin.

Based on the historical data since 1950, the annual counts of daily records show the unmistakable trend towards more frequent warm records and less frequent cold records in recent years. 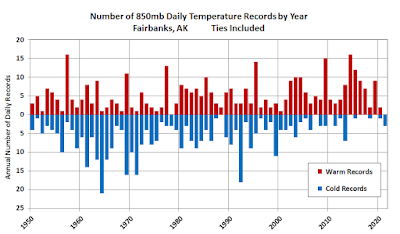 An interesting aspect of this is that there's a marked asymmetry between the trends.  The number of warm records per year has increased at about 3.5 per decade, but the number of cold records has diminished more than twice as quickly: the trend on the cold side is about -9.5 per decade.

The 2013 cold records were of course in May, and like last week, those were substantial new records that probably won't be broken for a long time.

I'll look at the seasonal distribution of records over the years in a subsequent post.