After the coldest start to April in more than a century, Fairbanks has seen unusual warmth persist for nearly two weeks now, and consequently the seasonal thaw is advancing very quickly.  As of the last daily report, Fairbanks snow depth was down to 3" in the official climate measurement, which is now taken on UAF West Ridge.  Remarkably, the accumulation of thaw degree days (excess of daily mean temperatures above freezing) is very close to the normal of the last 30 years for this date - and well above the longer-term normal.

Looking back at Fairbanks climate history, there's never been such a rapid seasonal thaw immediately after such extreme cold: over 100 thaw degree days within 15 days of a -29°F temperature.  Nothing even comes close, as illustrated in the chart below.  The coldest that previously occurred immediately prior to 100+ TDDs (in 15 days) was -13°F on April 10, 2004. 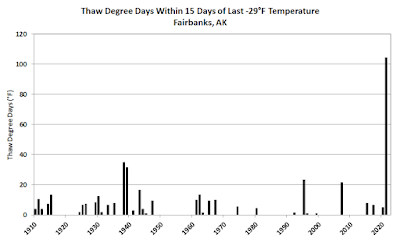 The cold start to spring, and the magnitude and sudden onset of the warm-up, keep reminding me of 2013, but in fact that spring saw unusual cold linger more than a month longer, so the similarity is not particularly close in the end (compare the two charts below).  Breakup was of course extremely late in 2013, but it may not be much different from normal this year. 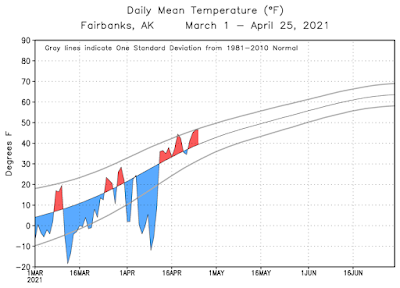 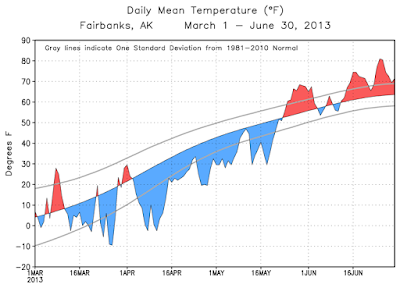