Following hard on the heels of last week's cold snap, spring has arrived almost immediately in southern, central, and eastern Alaska, with an extremely impressive warm-up.  After a frigid -29°F on Saturday morning in Fairbanks, the temperature reached 50°F on Monday; this 79°F temperature rise over just 2 days is tied for largest on record since 1912 - at any time of year.  For April it's a new record, beating the 75°F warm-up from April 13-15, 1992.

Not only did the thaw arrive with extreme haste, it is also sticking around, with 3 of the last 4 days reaching 50°F, and more warm days are ahead.  This too is very unusual: Fairbanks has never seen more than 4 days reach 45°F within a week of a +3°F (or lower) high temperature, like last Friday.  This time we'll likely see 5 days at 49°F or above within that 7 day window, depending on tomorrow.

And all this with still more than 2 feet of snow on the ground.  It's quite remarkable.

Of course the explanation is that the flow pattern has completely switched around, with deep southerly flow now importing very warm air from far to the south.  Compare this morning's 500mb situation (below) to that of last week. 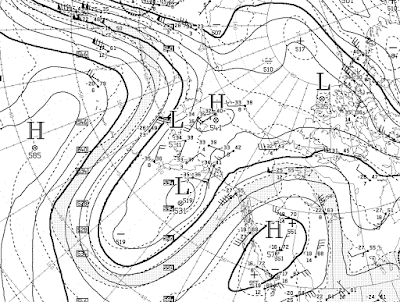 An extreme of one sign in the atmosphere typically begets an extreme of the other sign elsewhere, and sometimes the flow shifts in such a way that both occur in the same place in quick succession.  Of course this week's warmth is nowhere near as unusual as last week's cold - it would have to be 70+°F for that to be true.

Here are a couple of very nice photos of the Tanana River at the mouth of the Chena River this morning, courtesy of NWS Fairbanks on Twitter (click to enlarge). 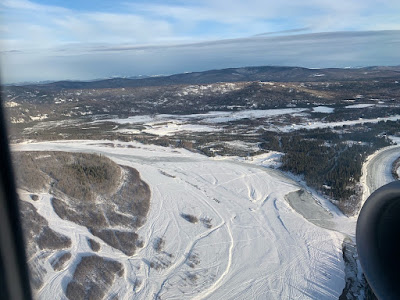 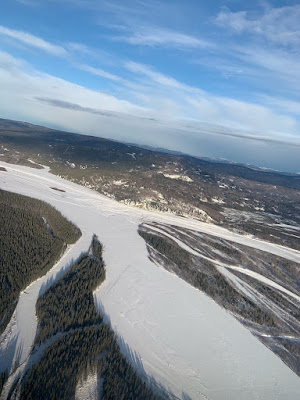