Last night was the climax of the great April cold snap for the eastern interior and south central Alaska, and -40s were observed in a number of the usual cold spots, including:

The thermometer on the Salcha River spent more than 5 hours below -40°F: 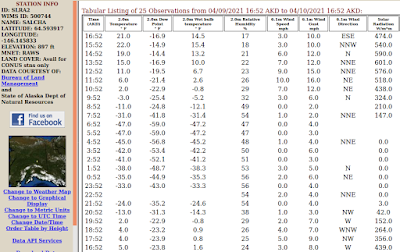 There was also a -48°F reported by a USGS river gauge on the Denali Highway, but it looks a bit suspicious to me, with a rather large temperature drop just for a single hour: 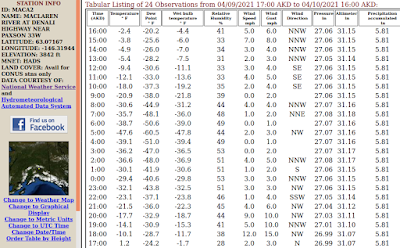 As for Fairbanks, the -29°F this morning didn't quite break the April record (-32°F in 1911), but yesterday's high temperature of only +3°F was easily the coldest on record so late in the season.  The previous coldest day after April 7 was +10°F in 1959 (April 17) - the same cold snap that I mentioned yesterday.

And not to overlook Anchorage, yesterday the airport climate site there broke daily records for lowest max temp (20°F), lowest min temp (6°F), and highest snow depth (24"), all on the same day (thanks to Brian Brettschneider for noticing this).  The snow depth aspect is remarkable, as total snowfall has actually been marginally below normal this winter in Anchorage; this reflects the persistent chill and absence of melting episodes.

It will be cold again tonight in many spots - although not like last night - and then the temperature will keep rising towards more seasonable levels and quickly beyond, as a major warm-up ensues.  It's going to feel seriously tropical by early next week.