How Much Solar Heating is there in Interior Alaska

Solar heating, or lack thereof, is a major driver in Interior Alaska. But why is it anymore (or less) important than anywhere else? Reader Trung has commented repeatedly about this. So, rather that spout some hand-wavy blather, let's deploy some actual physical modeling. 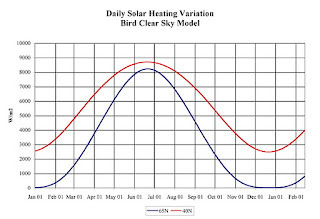 Here are some results using the Bird Clear Sky Model that produces quantitative estimates of solar radiation at the erath's surface using a variety of estimates of relevant variables (but with, not surprisingly, CLEAR skies). For this example I've left everything constant (e.g. albedo, water vapor). Using the spreadsheet from the National Renewable Energy Laboratory, I've summed the hourly values of global horizontal radiation, and then plotted the daily sums. The plots shows the huge annual variation at 65 (latitude of Fairbanks), from more than 8200 W/m² at summer Solstice to 12 W/m² at Winter Solstice (because these are the sums of the hourly values, these do not represent the total daily global horizontal radiation, but are computationally easier).

So, I go on about solar heating (or lack thereof) because it varies so darn much over the year, far more than at mid-latitudes.
Posted by Rick at 2:51 PM

Email ThisBlogThis!Share to TwitterShare to FacebookShare to Pinterest
Labels: Sunshine