A few days ago the Iditarod's board of directors voted to move the (re)start of the race from Anchorage to Fairbanks, as in 2003, because of a lack of snow along some rugged parts of the trail in the Alaska Range.  I couldn't help noticing a comment by race director Stan Hooley, reported by the News-Miner as "I think we’re all worried about the weather [...] There’s a pattern that’s developed. And that’s a concern to all of us."  In view of this, it's of interest to look at the snow depth data from several first-order observing stations to see if there is any evidence of changing snow conditions in recent years.

The charts below show the mean snow depth in February and March for several locations with a long history of reliable data.  The first chart shows the data for Anchorage, McGrath, and Nome (along the traditional Iditarod route), and the second chart pertains to Kotzebue, Bethel, and King Salmon (for comparison purposes). 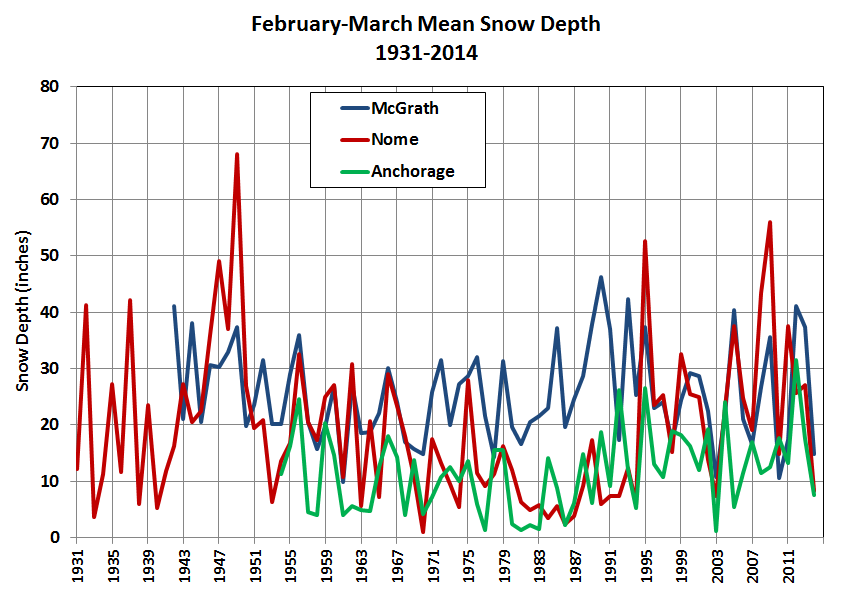 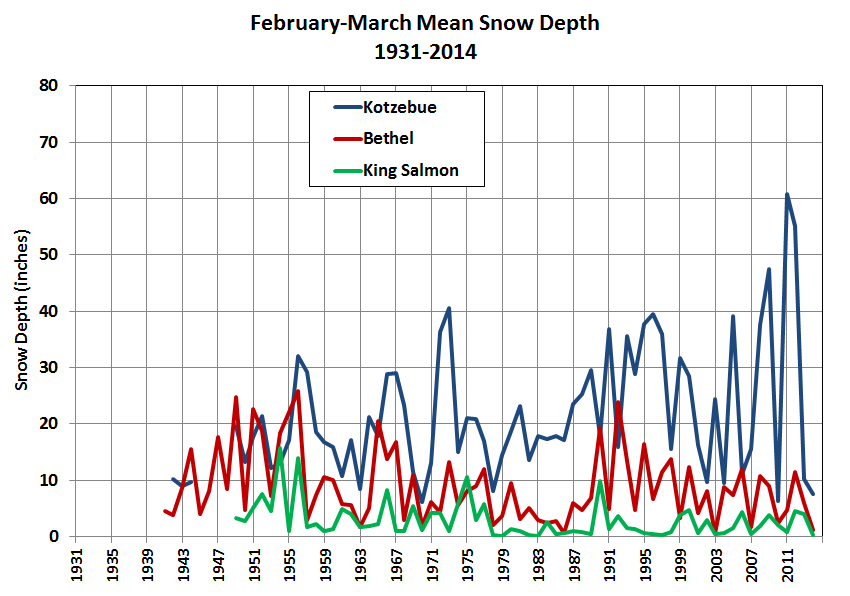 The first thing that jumps out is that there's no evidence of systematically lower snow depth in recent years at these locations, and in fact quite the opposite is true; on average, snow depth has been higher in the last 20-25 years in Anchorage, Nome, and Kotzebue, and slightly higher in McGrath.  The averages for two consecutive 30-year periods and for the most recent decade are shown below.  It's worth noting that at Nome, where the increase has been rather dramatic, the difference between the two 30-year periods is not statistically significant; however, the difference between 1955-1984 and 2005-2014 is very statistically significant, according to a Mann-Whitney U-test. 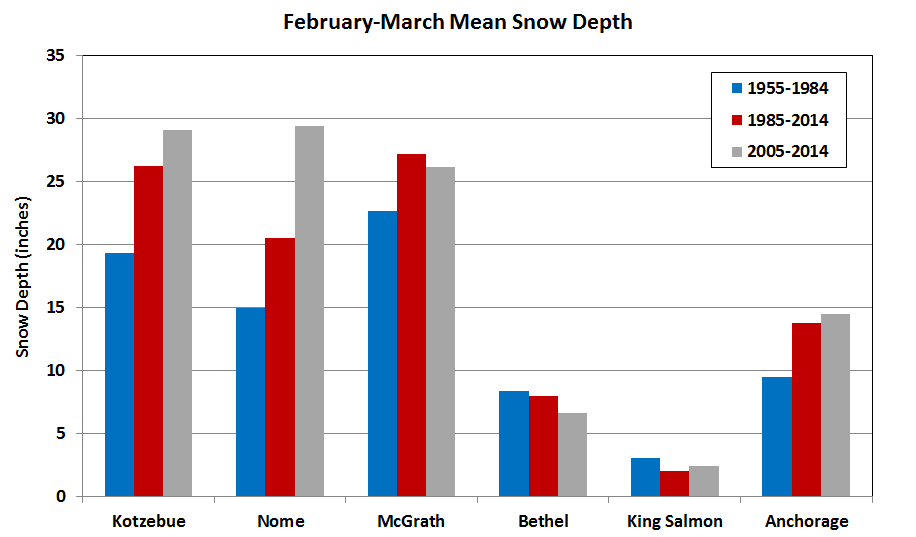 The second interesting aspect is the marked increase in variability of the snow depth at McGrath, Nome, and Kotzebue (especially the latter).  See below for a summary chart.  At McGrath, despite the fact that snow depth has increased on average, 4 of the lowest 9 snow depths have occurred since 2003, along with 3 of the top 9 snow depths.  The situation is more extreme in Kotzebue: of the past 11 years, only 1 (2007) did not fall in the top or bottom 20% of the overall historical distribution. 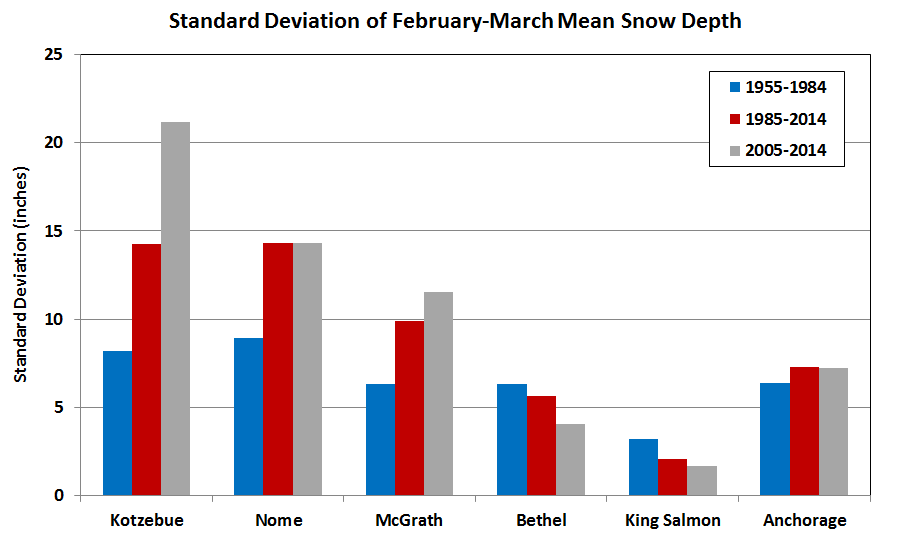 Although this is only a cursory look at historical snow data, the results suggest that perhaps the problem for sled dog racing in Alaska may not be a lack of snow in the mean, but too much variability from year to year.  Typically one thinks of climate changes primarily in terms of shifting the mean (or median); but this appears to be a rather clear example in which changes of variance have been very large - and possibly more significant in terms of impacts for human and animal activity.

[Update February 24: reader Andy mentioned the snow shadow on the northwest side of the Alaska Range and asked about snow depth data from Farewell Lake.  The chart below shows the distribution of daily snow depth for 17 winters at that location; the median is between 5 and 10 inches for much of the winter, and very low snow is not at all uncommon in February and March.] 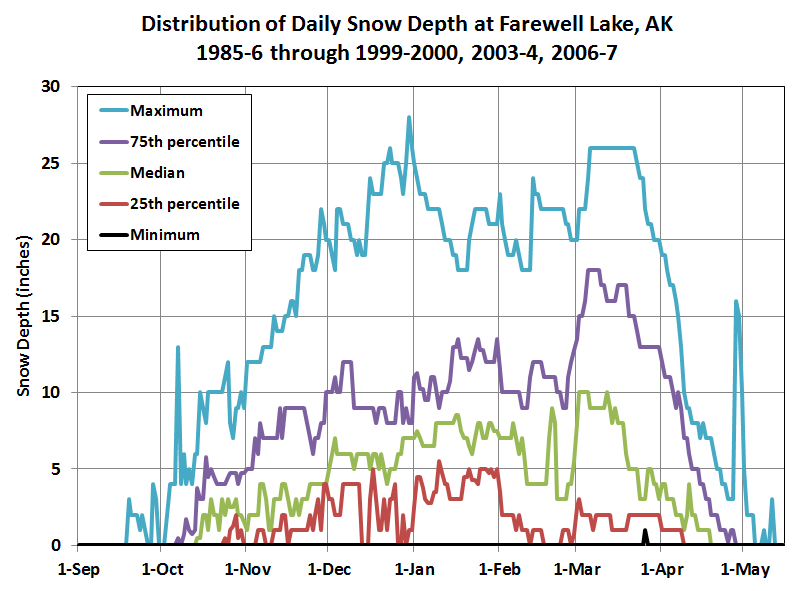