Fairbanks and many other interior communities were afflicted with freezing rain over the weekend in what seems to have become an annual winter ritual of late.  Last winter I looked at the history of significant (0.1" or more) winter rain and freezing rain events in Fairbanks; we can now add another event to the list, which means that four of the last five winters have seen a significant event.  This is quite a remarkable sequence, but as we noted before there have also been periods in the past when winter rain occurred with uncommon frequency.

Another way of looking at the historical trends is to extract reports of rain or freezing rain from the hourly observations.  This method includes all winter rain events, not just the most significant ones, but it does not account for the quantity of rain that fell; some of the events will have been just a trace.  The series of charts below shows the results when we do this for six locations with a reliable history of hourly observations since 1950.  Note that I looked at just the deep winter (Dec-Feb) period, and I've used the same vertical scale for all the charts to highlight the differences in the typical frequency of winter rain. 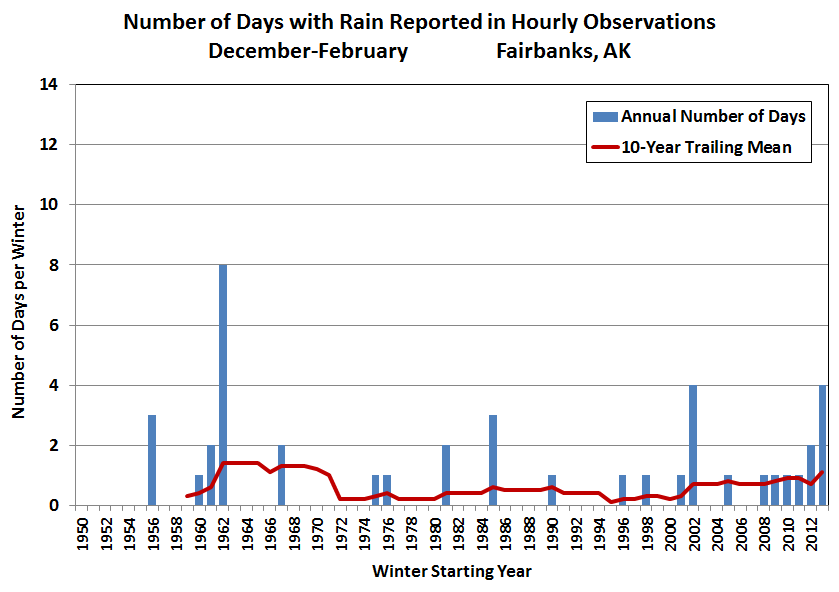 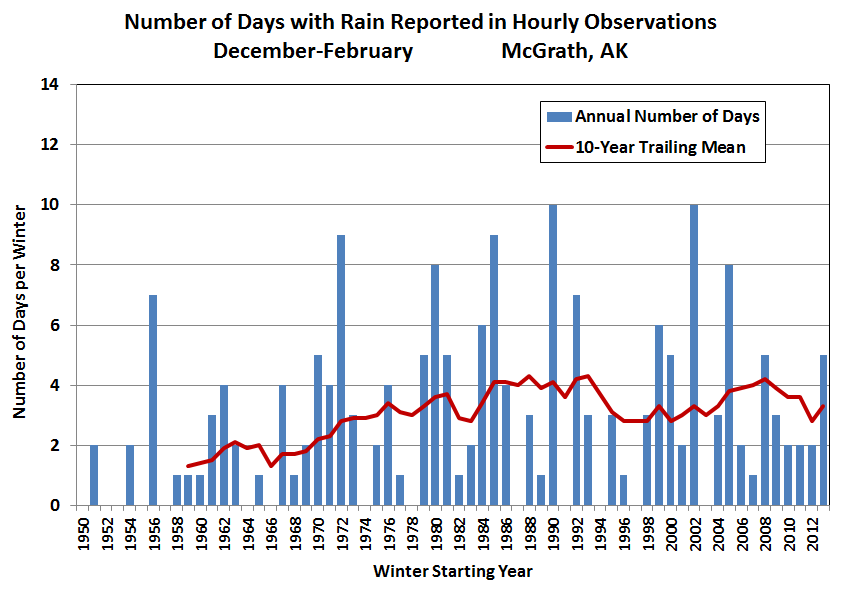 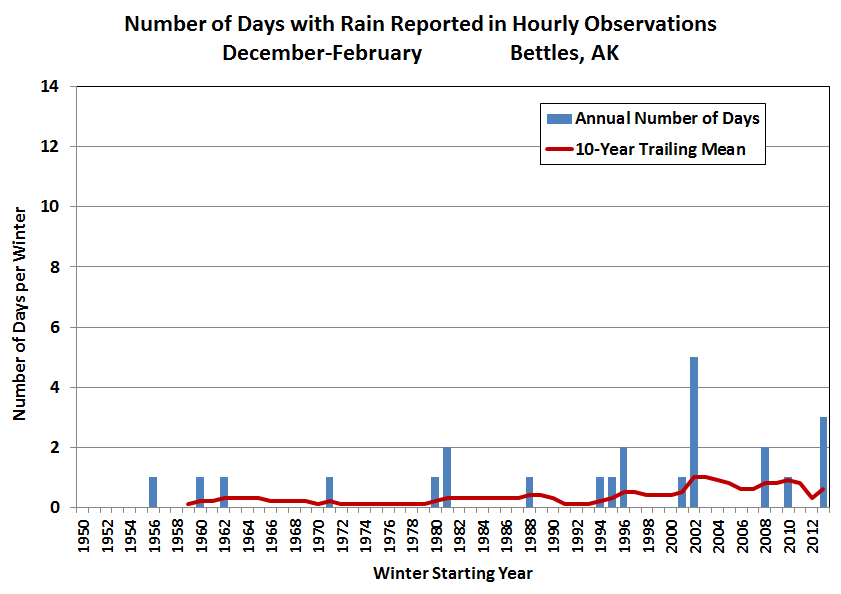 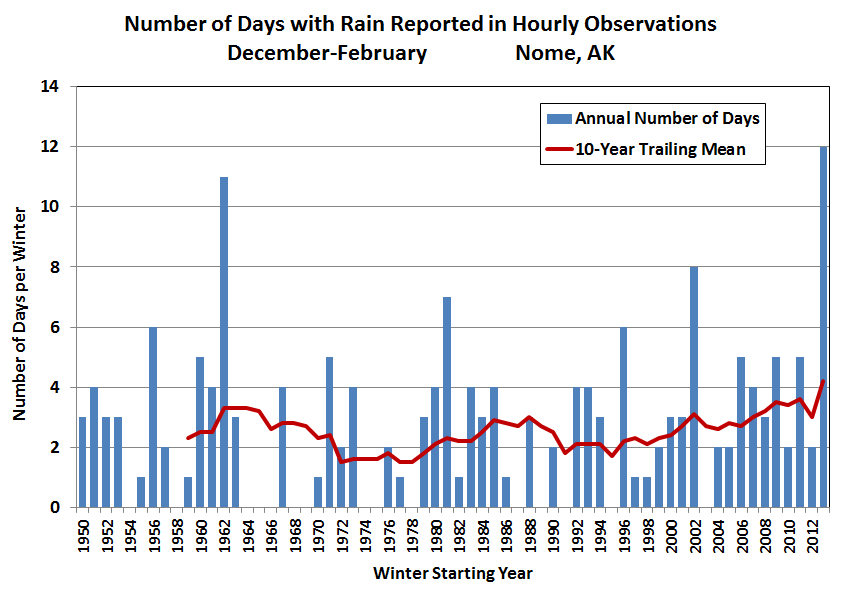 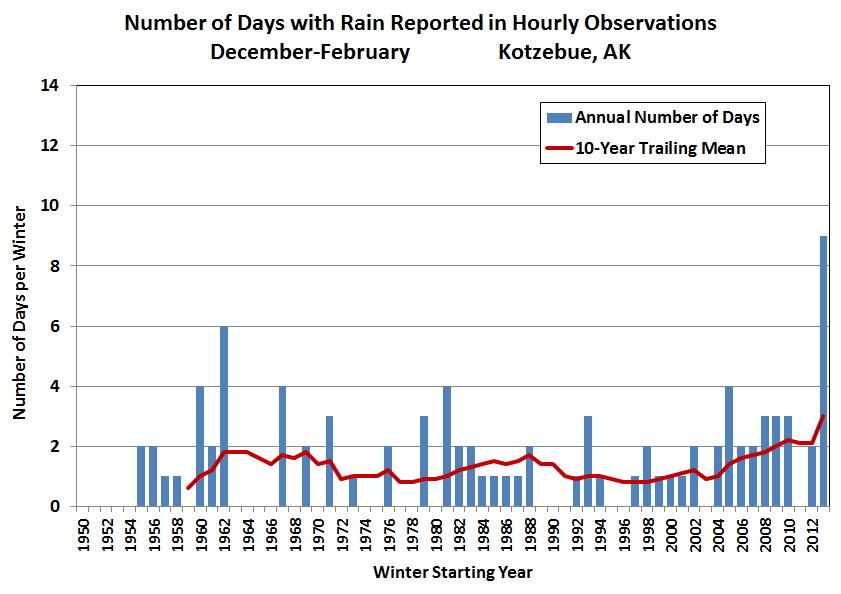 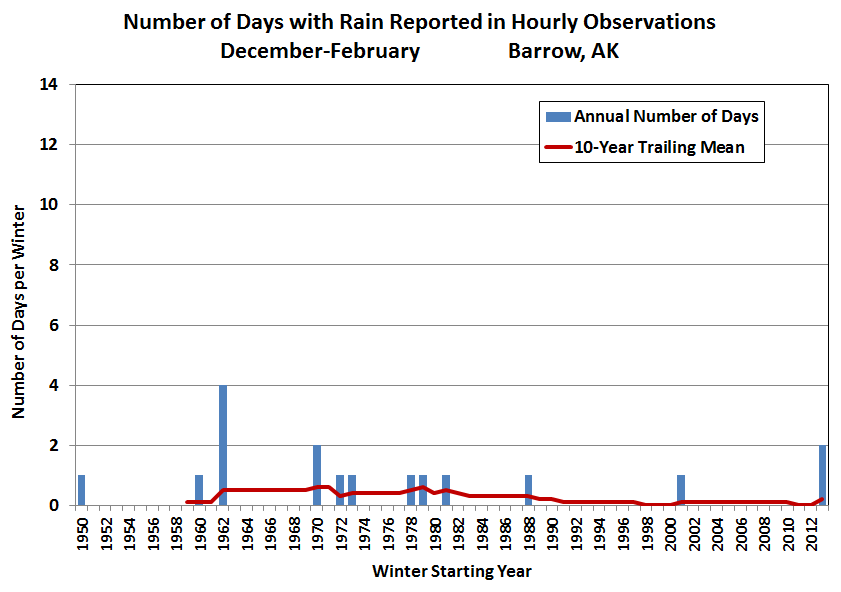 It's interesting to observe that in Fairbanks, none of the recent winters comes close to 1962-63 in terms of the number of days with rain.  I confirmed this by looking at the Local Climatological Data publication; remarkably, Fairbanks reported "glaze" in January 1963 on 10 separate days (some of these were freezing drizzle events).  However, the persistent recurrence of rain in recent winters appears to be unprecedented since 1950, with this winter (2014-15) being the 7th in a row with at least one report of rain.  The results also show that Nome and (especially) Kotzebue have seen a higher frequency of winter rain in the past decade than in earlier years.

Another interesting observation is that last winter (2013-14) was the first one with at least 2 rain reports (days) at all 6 locations.  Only 4 previous winters had at least one report at each location.  We can also note that only 5 winters had zero reports of rain at all of the locations - most recently in 2003-4.  In other words, nearly every year brings rain in deep winter to at least one of these locations.

The chart below shows an attempt to combine the 6 station series into an overall mean.  For each winter, I took the percent of normal at each station and then calculated the 6-station mean of these numbers.  This is better than just averaging the 6 series together, because that result would be dominated by the higher values at Nome and McGrath. 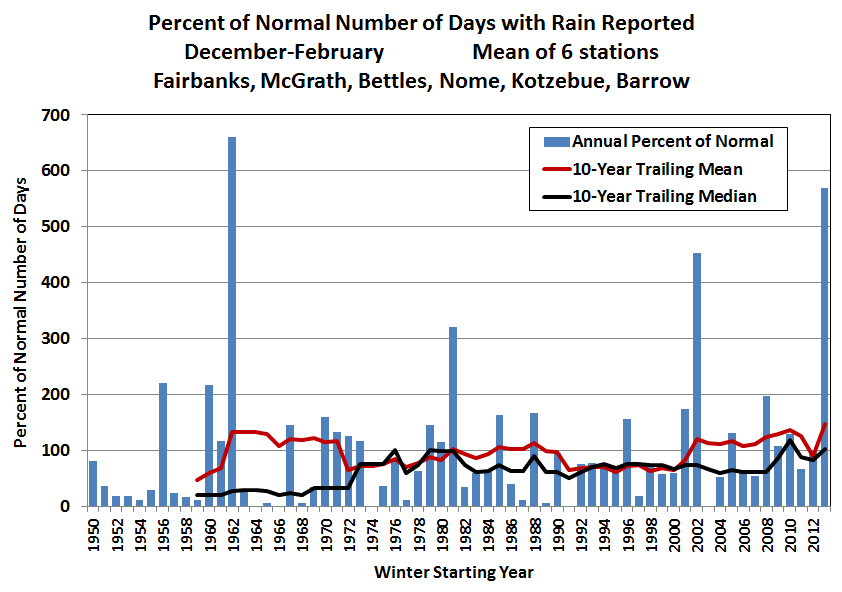