This is a follow-up post concerning the topic of Monday's post, i.e. that this winter has been remarkably lacking in wind in Fairbanks.  Brian showed that the same is not true just a short distance up the Tanana River at Eielson AFB, but I haven't had a chance to examine other locations yet; so for now I'll continue with the focus on conditions in Fairbanks.

The first item of analysis I looked at was the mean pressure gradient this winter near Fairbanks, compared to previous winters (see below).  The mean gradient has been lower than the long-term mean, so this may be part of the answer for the windless conditions.  However, the pressure gradient is no lower than in some other years of the last decade or so, and therefore we can't exclusively blame this winter's extreme lack of wind on weak pressure gradients at the synoptic scale. 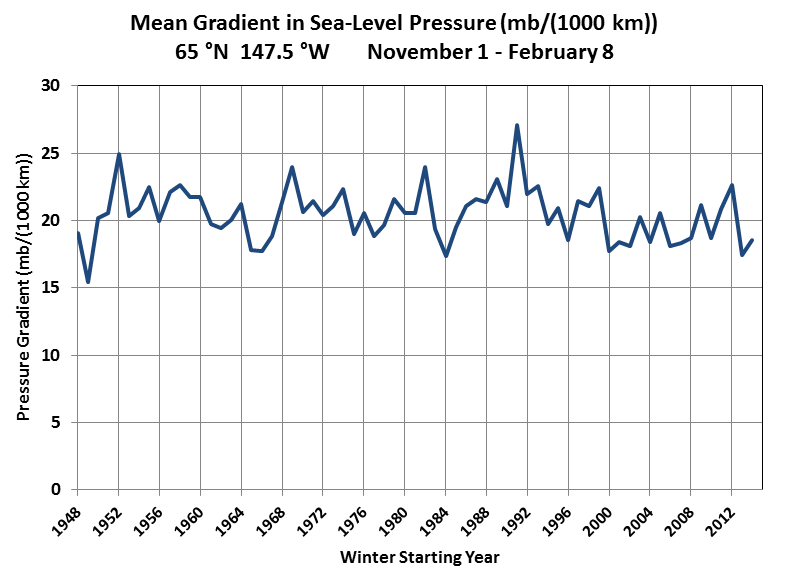 Secondly, I looked at the mean wind speed at several heights above ground using the balloon sounding data from Fairbanks airport (see below).  We've seen these long-term trends before in a previous post.  Interestingly the wind speed at 500m above ground has been near a record high this winter, while the wind speed at 50m has been near a record low; the overall trend since the early 1990's suggests an increasing degree of decoupling between the surface-level air and the air aloft.  Note that I obtained the wind speed at each level by interpolating the wind vectors between reported heights on each sounding.  The main point here is that the sounding data confirms that the low-level winds have been unusually low this winter (although not a record in this data). 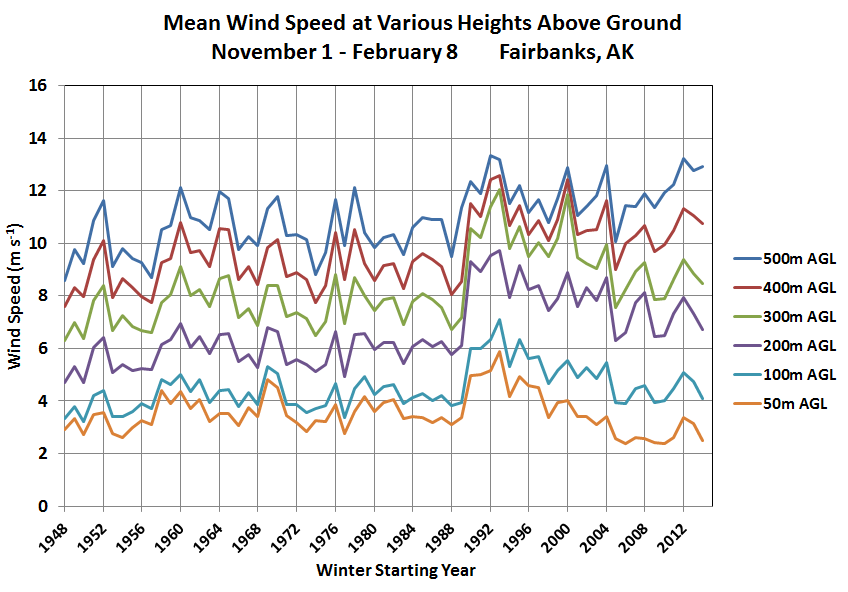 Next I calculated the mean inversion strength in the lowest 100m of the atmosphere, again from the sounding data - see below.  We would expect to see a relatively strong low-level inversion in association with light winds, and indeed we see that the near-surface inversion has been stronger than in most past years; so this is physically consistent. 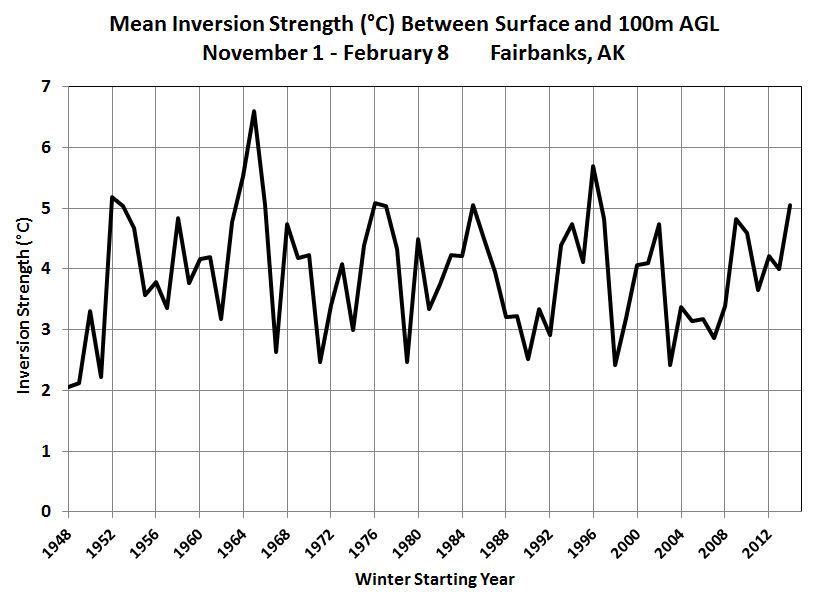 Finally, I looked at the distribution of wind direction this winter, because reader Gary suggested that southeasterly flow can set up a low-level eddy circulation in the Fairbanks bowl, and this would seem to favor local stagnation of the flow.  The chart below shows that surface winds (when not calm) have mostly occurred from the north through northeast quadrant, with a secondary peak in frequency from the south.  However, at a level of just 50m above the ground the flow has been mostly out of the northeast through east-southeast. 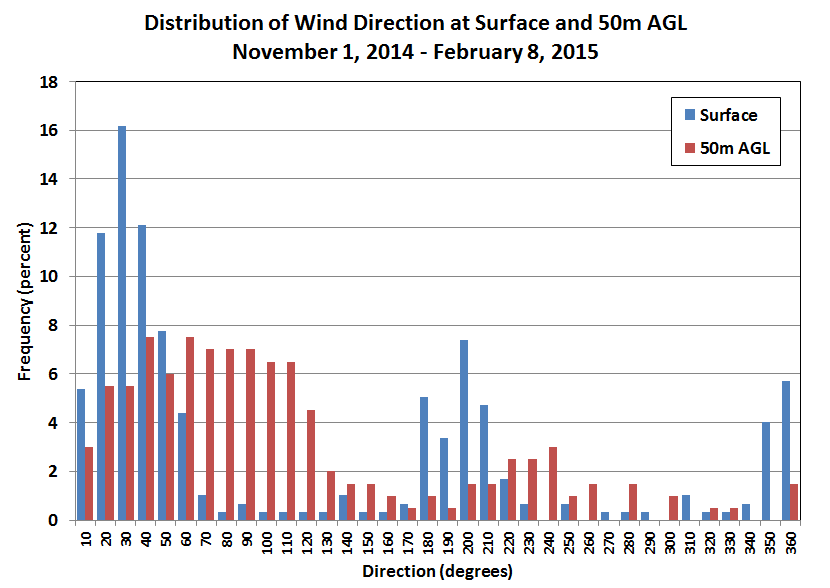 Looking at the frequency of 50m winds out of the east to southeast quadrant (90-135°), we find that this winter is second only to 2002-2003 (see below).  East-southeasterly winds have been considerably more common than usual just above the surface, and so this supports Gary's hypothesis that flow from this direction favors light winds and stagnation in the Fairbanks area. 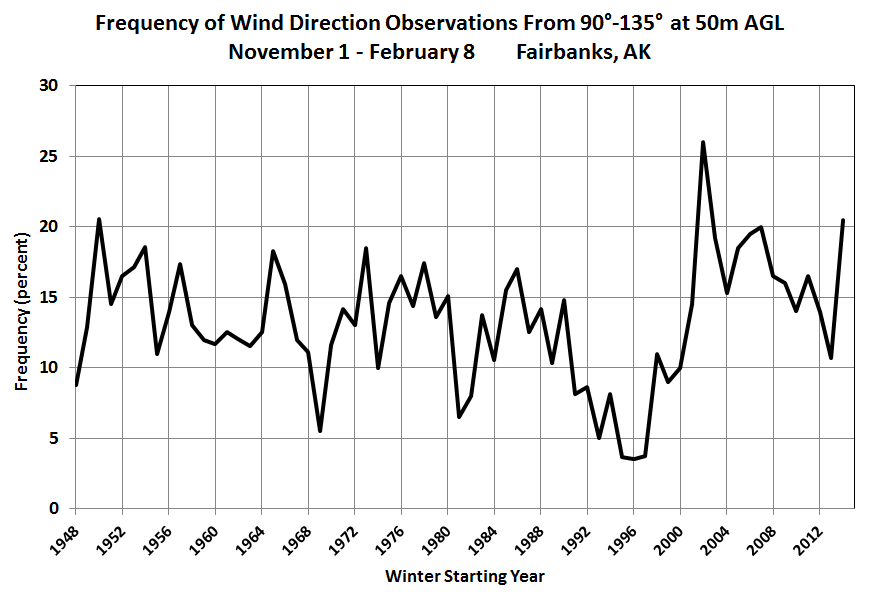 In summary, the results so far suggest that this winter's lack of wind may have been partly caused by the overall benign pressure pattern, with weak synoptic-scale gradients (related to persistent ridging aloft), and also partly by a prevalence of (light) southeasterly flows.  It appears to be a plausible hypothesis that light southeasterly winds interact with local topography to create near-stagnant flow in the Fairbanks area; and this happens to have been a common occurrence this winter.