** Note: I posted a nearly identical post focusing on the Lower 48 on my other blog. **

Slightly over a year ago, I wrote a post about the number of winter weather forecast products issued in Alaska between 2009 and 2013. This is an update of that post using data through 2014 and adding several more categories. Additionally, there are both Experimental and Operational categories that were not fully captured last year – now they are.

In 2005, the National Weather Service (NWS) made a significant change to the way they issue watches and warnings. They introduced the VTEC coding system to standardize the procedure for issuing these products. The VTEC code allows various software packages to quickly decode the forecast product and display it on a map or transmit the information to subscribers and the public. Figure 1 shows a sample forecast product with the VTEC code outlined in red. The VTEC line notes that it is operational, a new issuance, from the Fairbanks NWS Office, a winter weather advisory, and the start/end times. 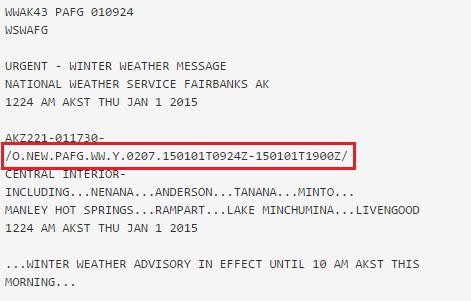 Figure 1. Winter Weather Advisory issued by the Fairbanks, Alaska, NWS office on January 1, 2015. The VTEC is outlined in red.

The University of Iowa generously logs all NWS forecast products from every office in the country. Their archive site is quite handy for analysis of historical data. Unlike many data archive sites, they are perfectly happy to let you grab data using your own scripts and other tools. They even provide some sample Python scripts to use. Thank you Daryl Herzmann!

In this analysis, I am interested only in winter weather products (not Dense Fog Advisories, High Wind Warnings, etc.). Each NWS Office is responsible for all forecasts within their zones. As most readers of this blog know, there are three Forecast Offices in Alaska – Fairbanks, Juneau, and Anchorage. Figure 2 shows the NWS Office boundaries and forecast zones for Alaska. 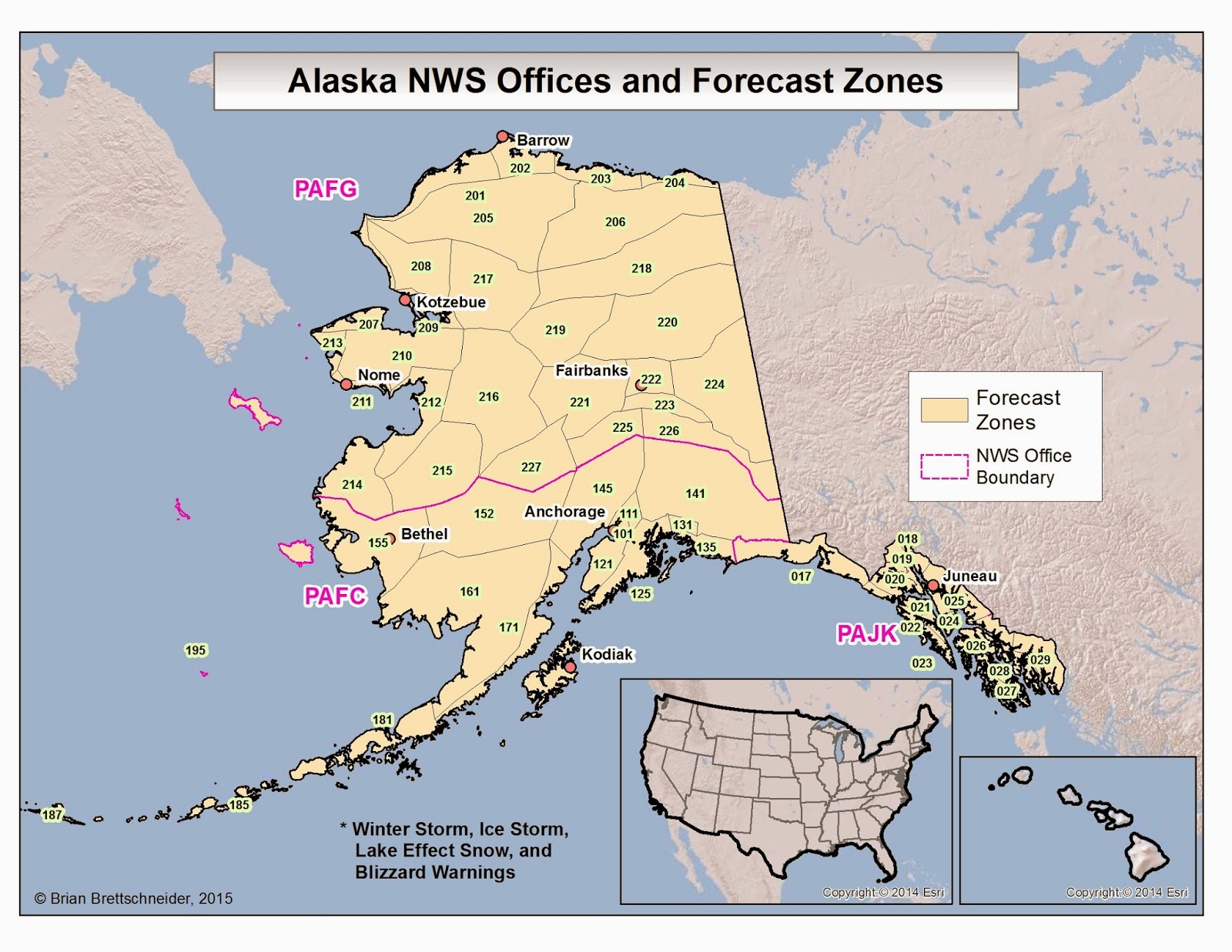 Figure 2. Map of all NWS Office boundaries and forecast zones in Alaska.

With the exception of Blizzard Warnings, the criteria for every winter weather product is defined by the local NWS office. For example, the Wind Chill Advisory criteria for most of Alaska requires wind chill value of -40° or lower with a sustained wind of 15 mph or higher for three or more consecutive hours. In southern Florida, a wind chill of +35°F is sufficient for issuance of a Wind Chill Advisory. Therefore, southern Florida has seen more Wind Chill Advisories than most of Alaska! Another post from last year shows the criteria established by each Alaska Forecast Office for several winter weather products.

In this section we present nine (9) maps of winter weather advisory products. For all maps, we use the 2009-2014 time period. The reason for this is because significant changes were made to the suite of forecast products in 2008. For example, Snow advisories and Freezing Drizzle Advisories were consolidated into Winter Weather Advisories. Due to this change, and others, I thought it best to start with 2009 instead of parse out the pre-2009 data. Please keep in mind that these are forecast products. No attempt has been made to assess the accuracy of the forecasts. When looking at the Lower 48 inset, remember that each forecast office down there has their own criteria too. Therefore, a comparison of the number of advisory and warning products is an apples to oranges comparison – but it is fascinating nonetheless. Also keep in mind that the legend categories were chosen to encompass all values in the U.S., not just Alaska. 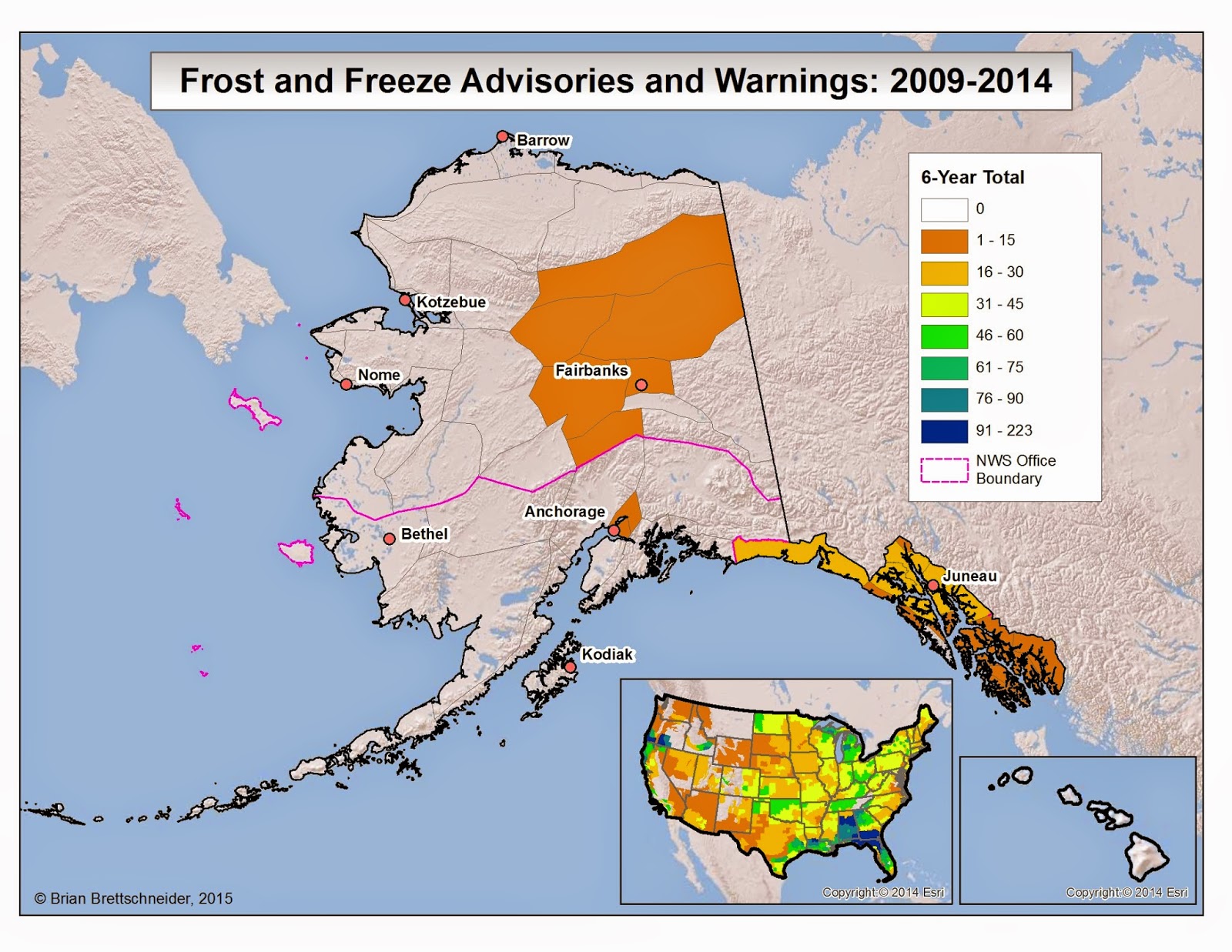 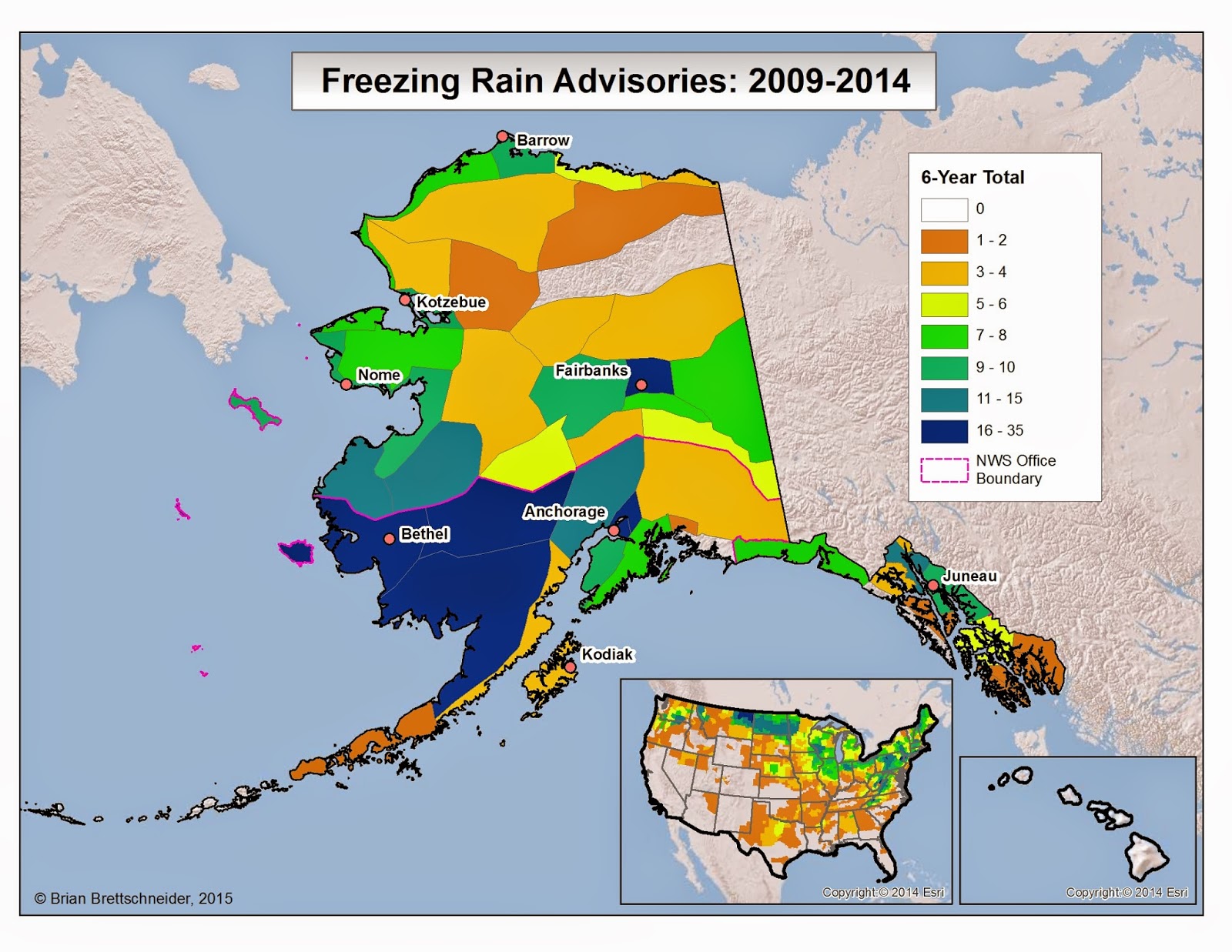 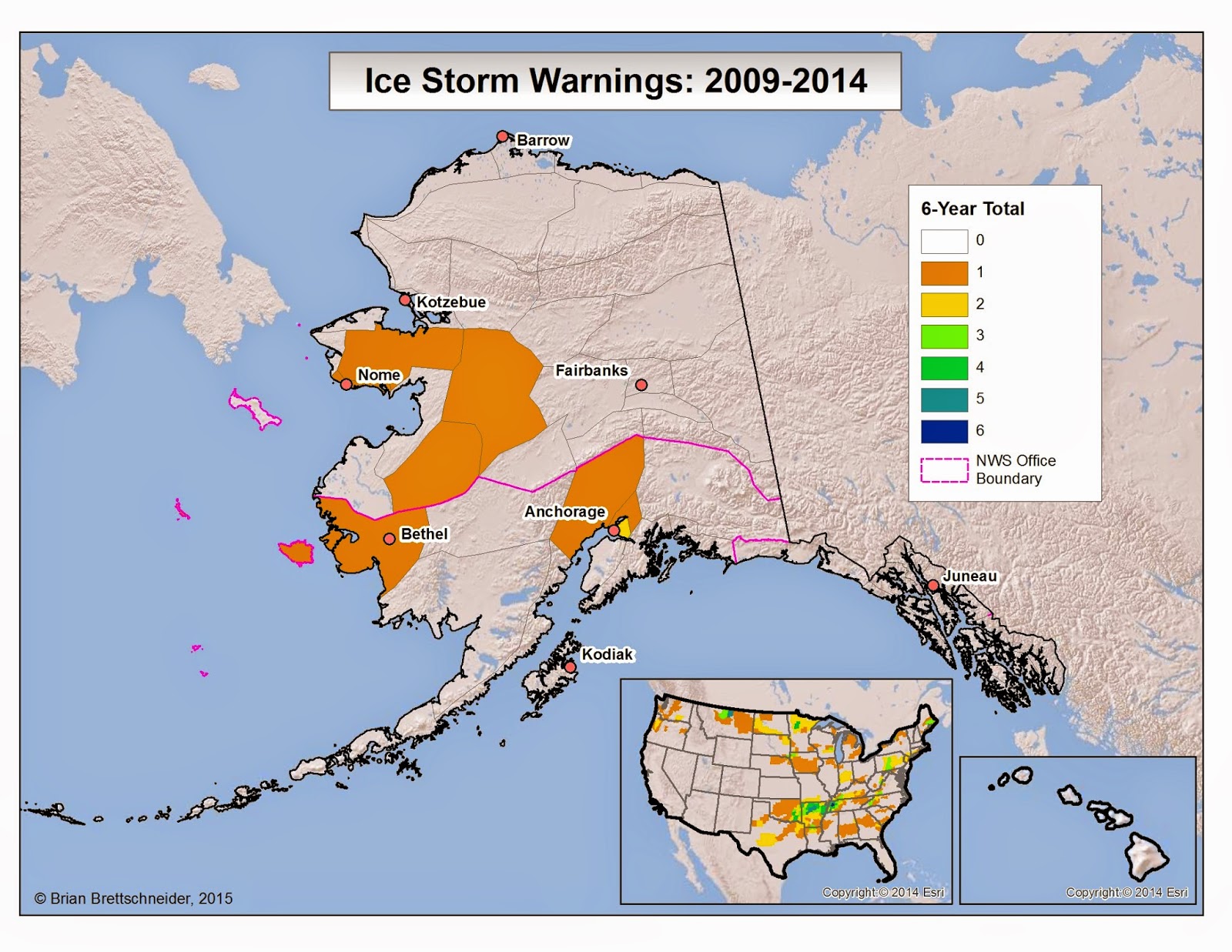 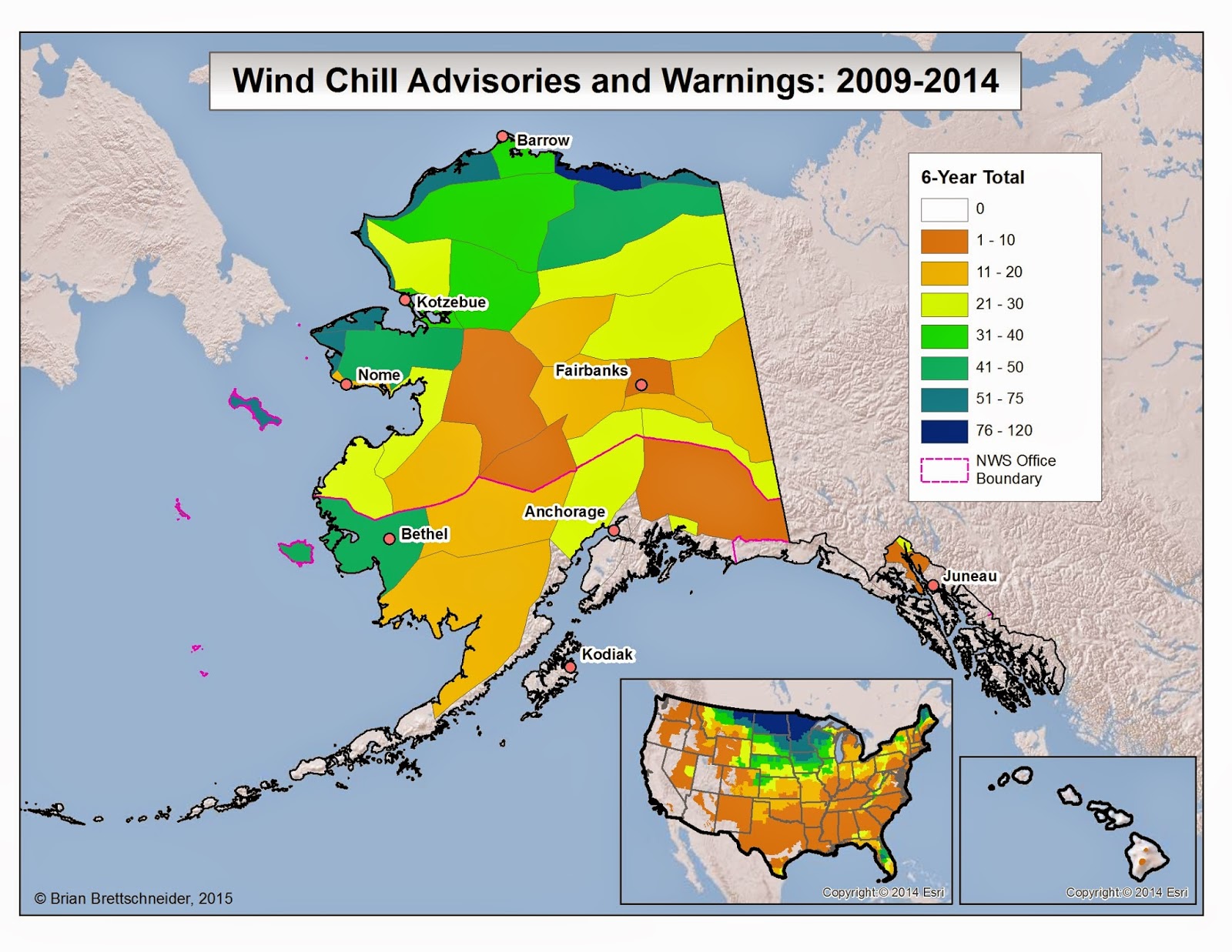 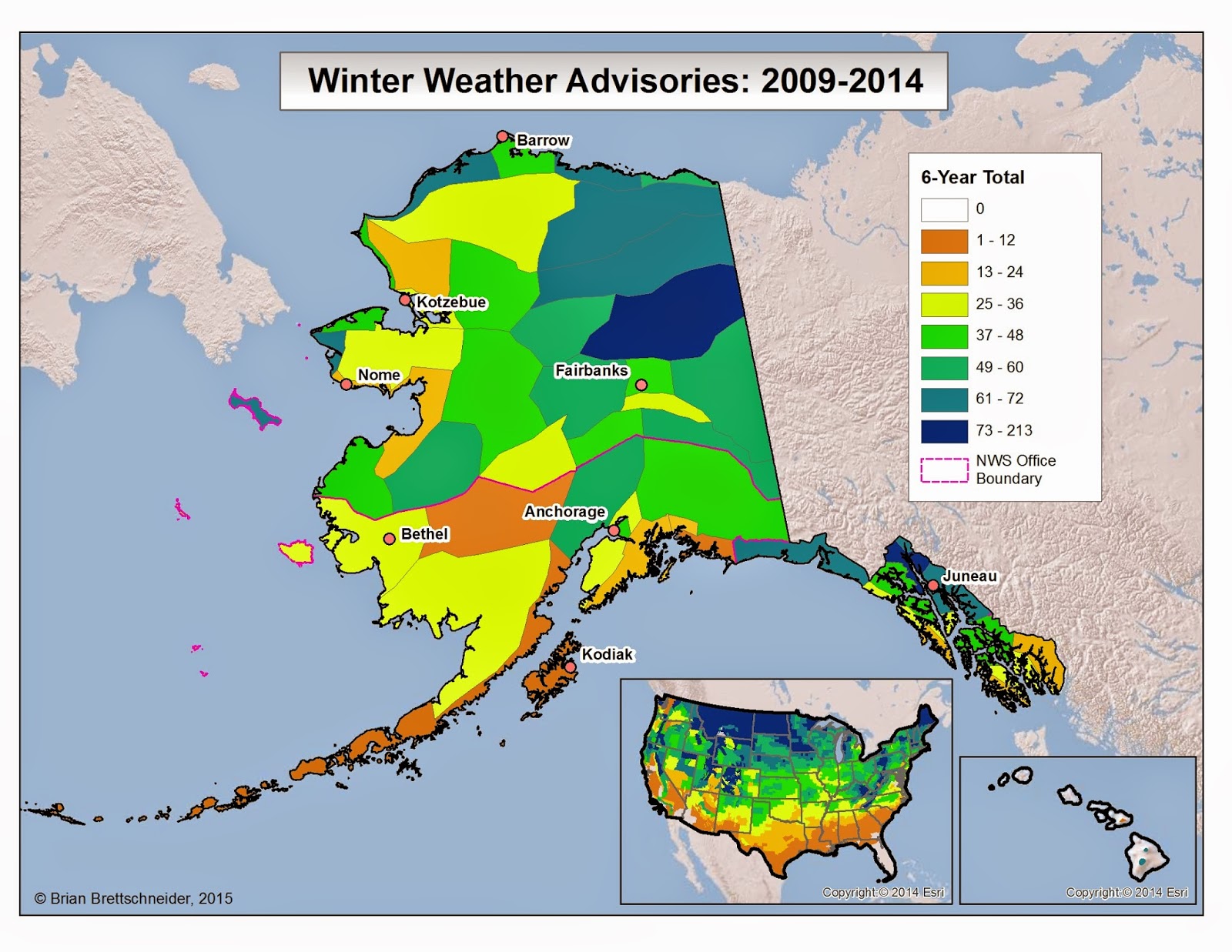 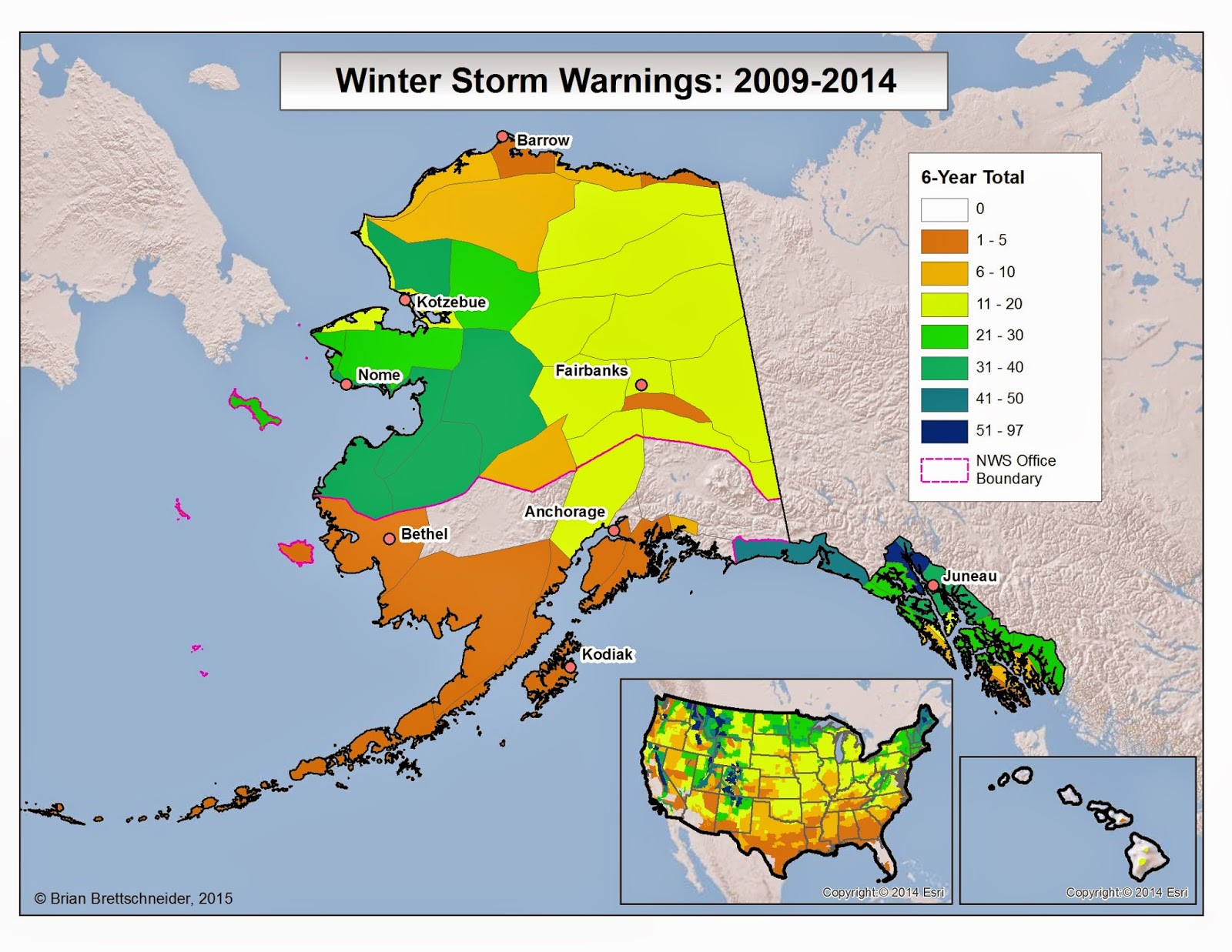 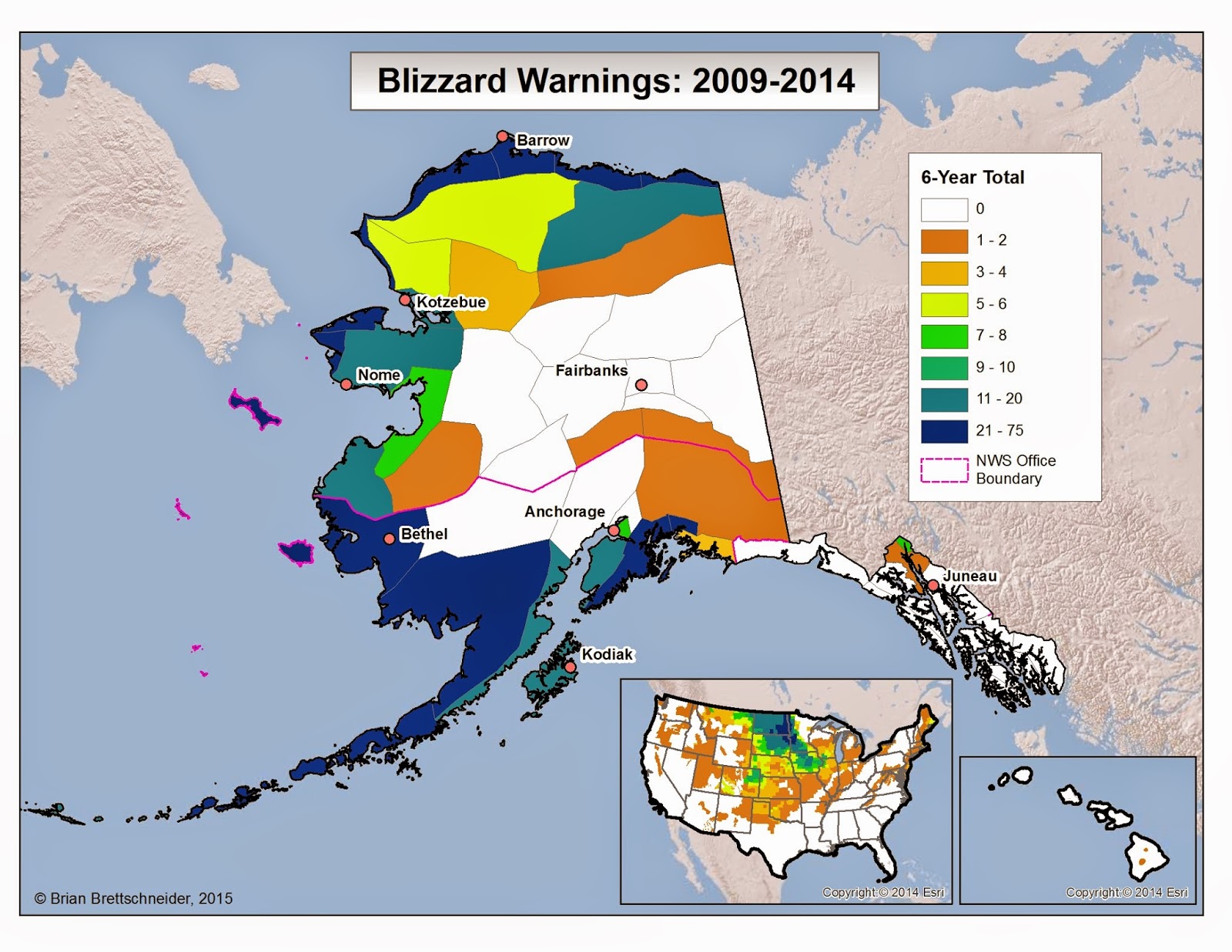 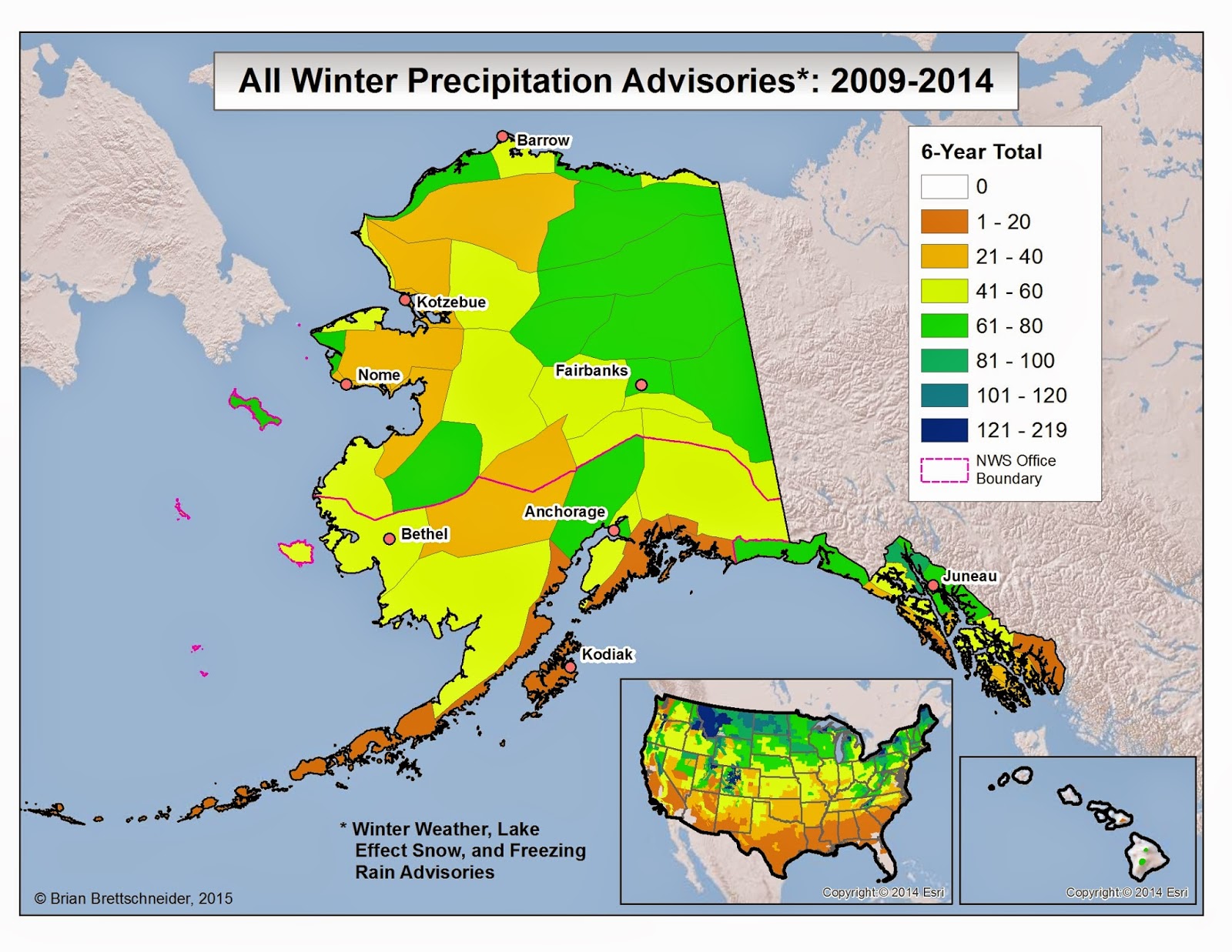 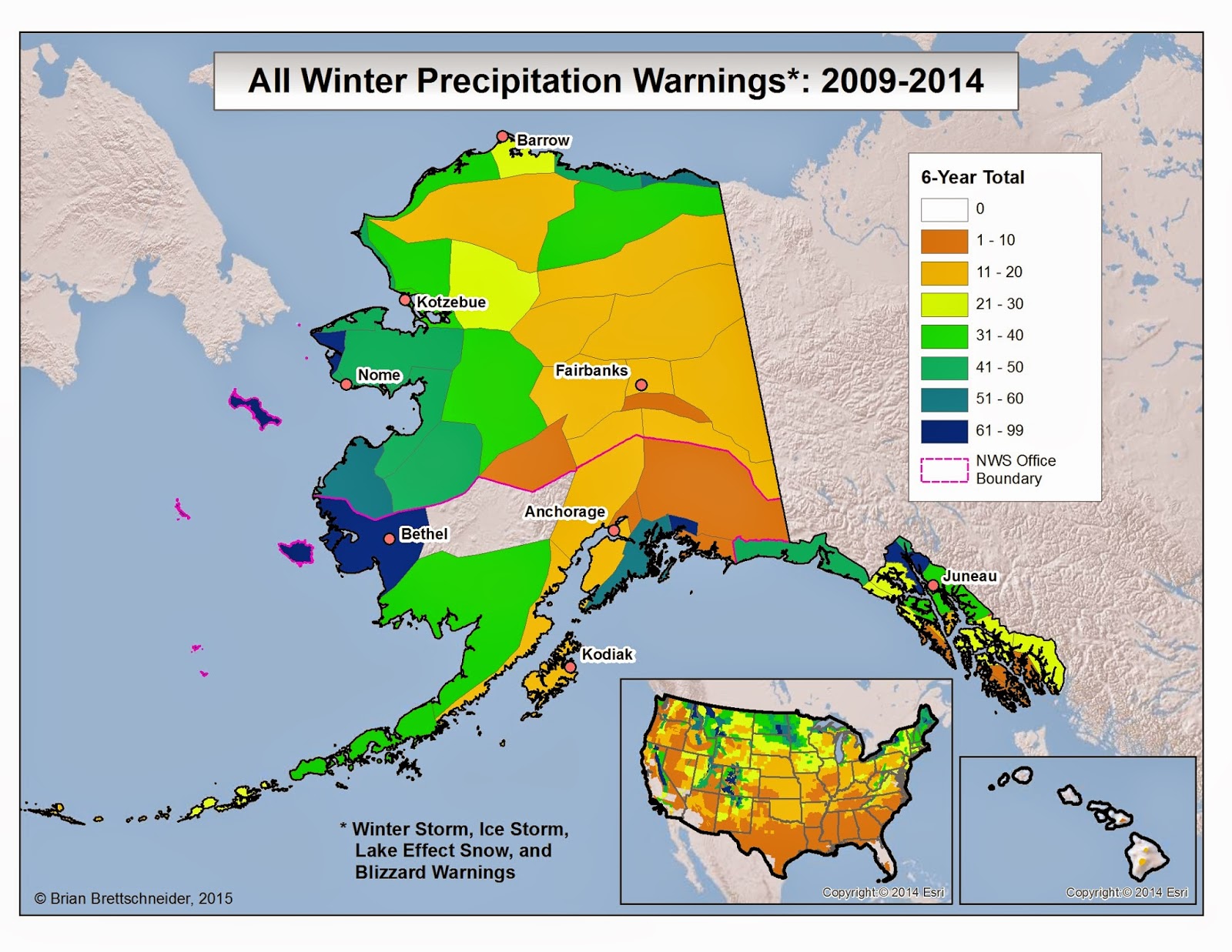 There are far too many patterns in the maps to mention. The patterns are a result of climatology, forecast criteria, and forecaster judgement. Is there anything that surprises you?

Note: While I attempted to accurately portray the data depicted above, I cannot guarantee it is error-free.
Posted by Climatologist49 at 9:55 PM