As a follow-up to Monday's post on freezing rain trends, I thought it would be interesting to divide the historical winter rain events according to temperature so that we can see the relative changes in frequency of "plain rain" versus "freezing rain".  I define "plain rain" as rain at temperatures of 32 °F or higher, and freezing rain as rain at sub-freezing temperatures.  Of course, plain rain in winter generally still freezes on road surfaces in interior and northern Alaska, even if the air temperature is well above freezing, so the distinction may not be practically all that useful - but the results are interesting nonetheless.

The charts below show the number of days each winter on which rain was reported, with red columns indicating reports at which the temperature was simultaneously at or above 32 °F, and blue columns indicating "freezing rain" reports.  The 10-year trailing mean lines are colored correspondingly to highlight the long-term variations. 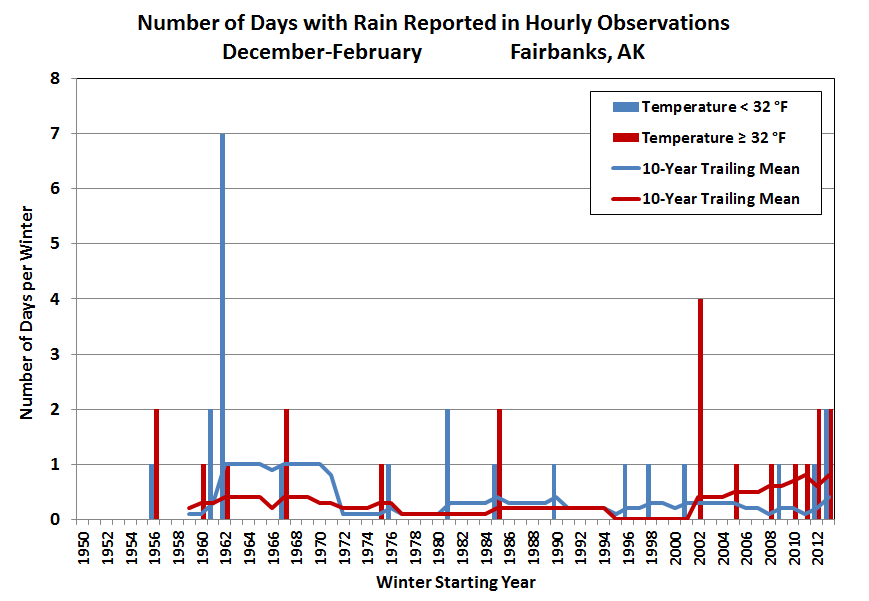 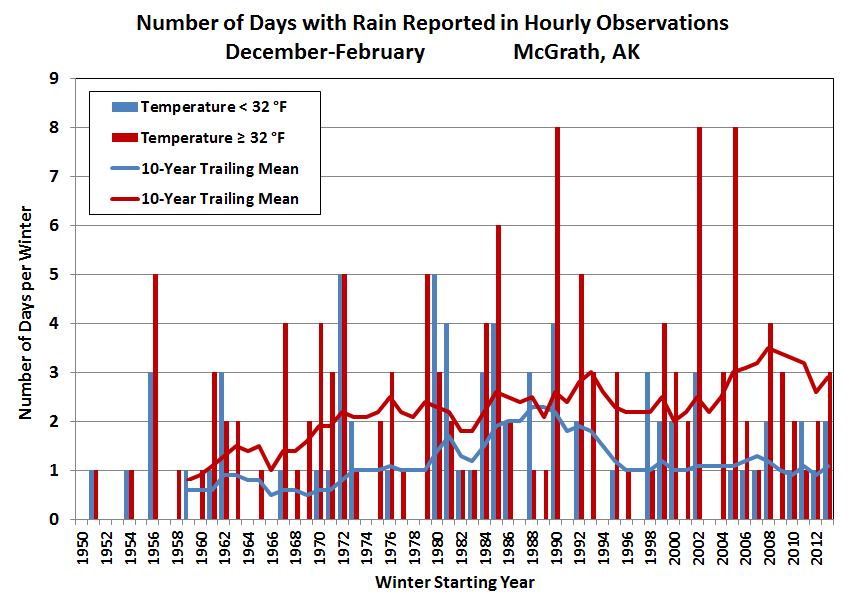 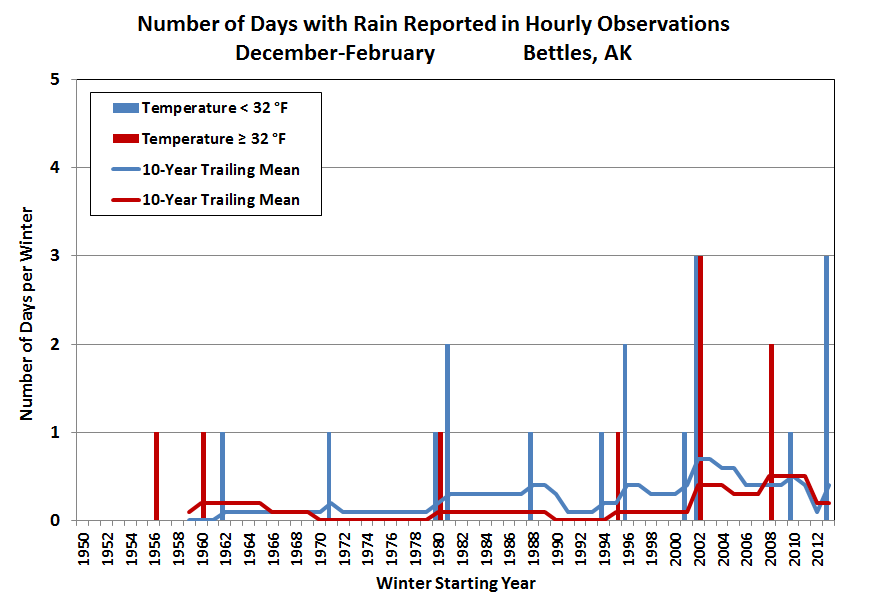 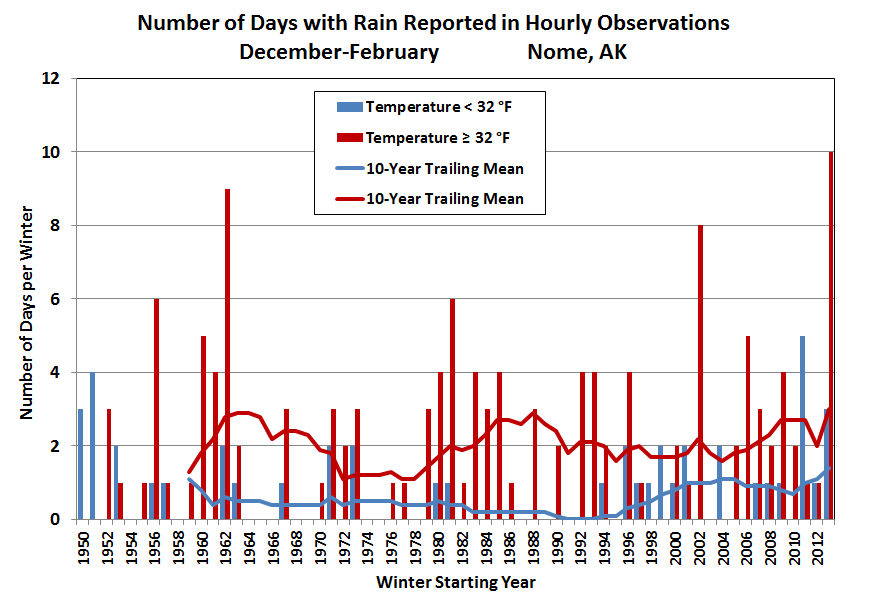 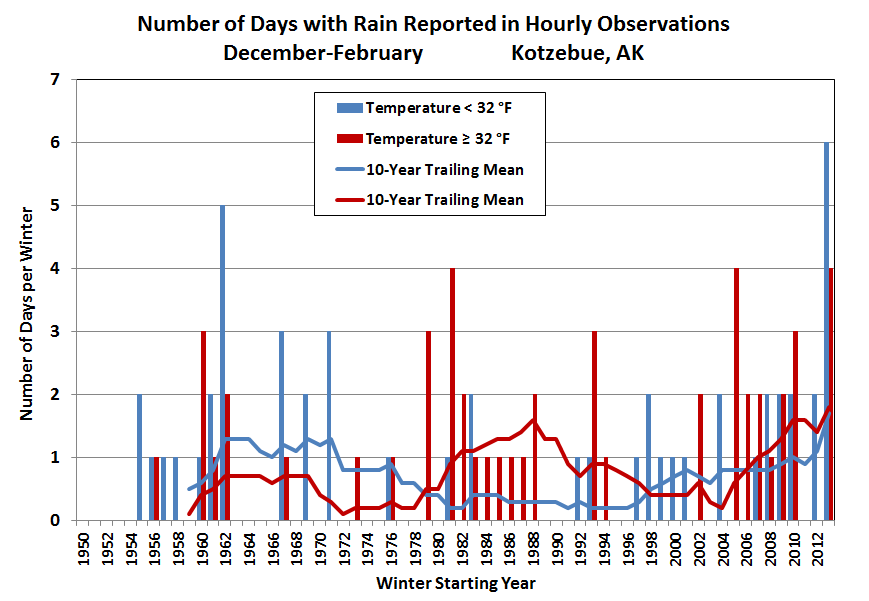 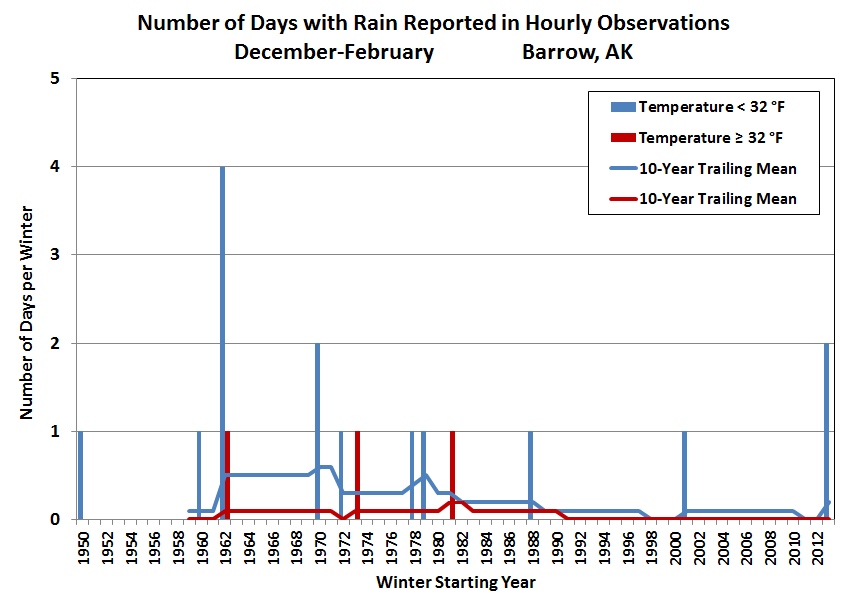 In Fairbanks, McGrath, and Kotzebue, there is a fairly clear trend towards plain rain taking up a larger proportion of all winter rain events in recent years.  The changes in Nome are not quite as clear, as freezing rain also appears to have become more common in the past 20 years.  Rain of any kind is rare in Barrow in winter, of course, although it does happen, and even at temperatures above freezing on three occasions since 1950.

As in the previous post, the 6-station mean consolidates the overall trend quite nicely (see below).  There has been quite a pronounced increase in the frequency of plain rain, beginning (it would seem) with the anomalous winter of 2002-3.  It is interesting to bear in mind that the PDO was predominantly negative from 2007-2012, so the warmer rain is presumably not attributable to warmer nearby ocean temperatures.  Based on a Mann-Whitney U-test for non-normally distributed data, the increase in plain rain frequency is very statistically significant (p<0.02) and is not sensitive to the choice of years for the two sub-samples. 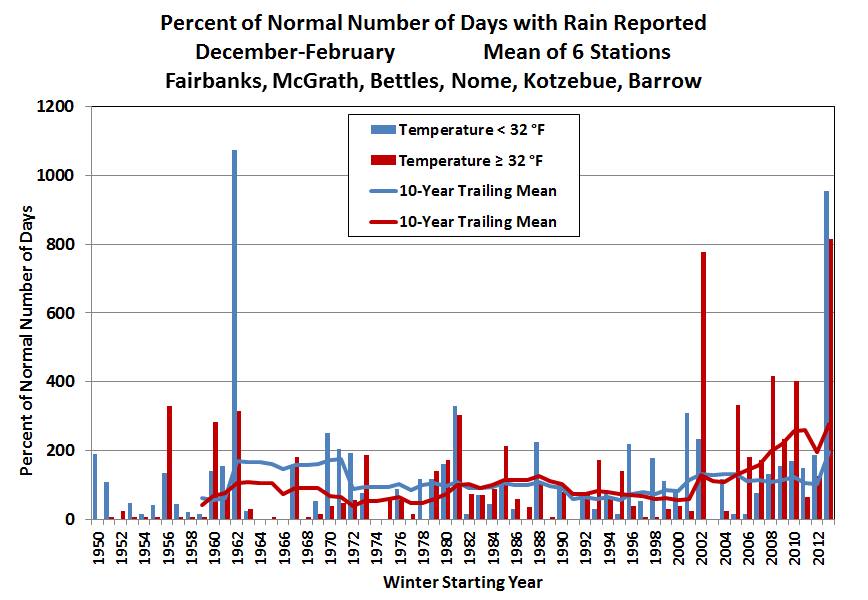 To confirm the changes at Fairbanks, I examined the temperature observations that accompanied all rain observations from 1950 to 2014, and compared the distributions from 1950-1982 and 1983-2014 (see below).  The shift to warmer temperatures is notable, as temperatures above 34 °F have become much more common during winter rain events, while significantly sub-freezing temperatures have become much less common.  This matches what we saw last week: the rain occurred at temperatures of 32, 33, and 34 °F.  In other words, Fairbanks now tends to see plain rain relatively often in winter, as opposed to true freezing rain which was the favored outcome (when it rained) in the past. 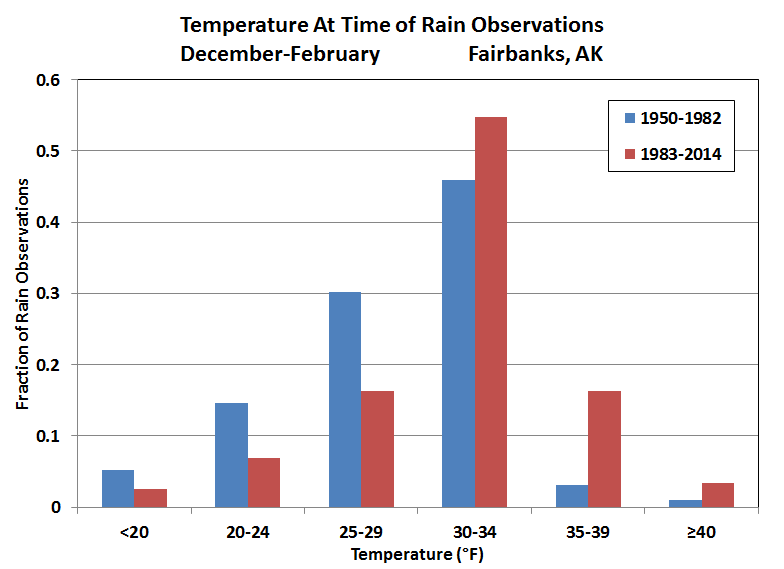